Pregnant Teen Finds Hope and Healing: A Look at the Movie “Gimme Shelter” 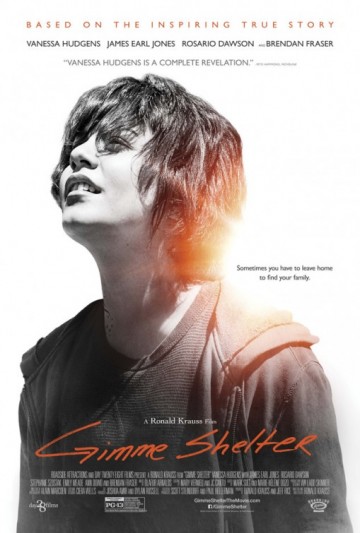 “Last time I asked for God’s help, He put me here,” 16-year-old Apple Bailey angrily tells the priest visiting her in the hospital following a car accident.

“Perhaps you’re exactly where you’re meant to be,” the priest responds.

That exchange in the movie “Gimme Shelter” (in wide release on January 24) eventually leads to an epiphany for Apple (Vanessa Hudgens), who is homeless, pregnant, and struggling to escape from the grip of her abusive, drug-addicted mother (Rosario Dawson). Though she seeks help from the rich father (Brendan Fraser) she’s never met, he can’t fully accept her situation.

When a street thug threatens Apple, she steals a car and gets into the aforementioned accident. And though she can’t see it at the time, that seemingly-tragic event is what sets her on a course to find love and family in ways she’s never before experienced at a shelter run by Kathy DiFiore (Ann Dowd).

Where You’re Meant To Be

The idea of being “where you’re meant to be” could also apply to the story behind the making of the film. One day, someone asked filmmaker Ronald Krauss the fateful question, “Have you heard about this shelter that’s helping young women get off the streets?”

The shelter in question was Several Sources Shelters, created by Kathy DiFiore, a real-life person, not just a movie character (read an extended look at Kathy’s work here). Her 30-plus year ministry has provided shelter and support to homeless, pregnant teenagers in New Jersey, and saved the lives of thousands of babies.

Though Krauss hadn’t heard of DiFiore, he visited the shelter while staying at his brother’s house for the holidays. As Krauss explained to me during a “Christopher Closeup” interview, “I didn’t have any intention of doing anything. Then I got so touched by some of these young girls’ lives…One of the girls that I met had walked 25 miles to get there, and I helped her into the shelter. That was transformative for me! It reached into my heart that I had helped somebody…I approached Kathy one day and said, ‘I think more people need to find out about this place because this [story] could spread kindness and compassion.’ I never expected it to be this film, but it just blossomed.”

Krauss had a history of working on projects with moral and spiritual depth. His first-ever film in the late 1990s – a short called “Puppies For Sale,” which starred Jack Lemmon – addressed the inherent dignity of people with disabilities because he himself had grown up with a disability and endured the social repercussions of that. A later film, called “Amexica,” looked at the plague of human trafficking.

Krauss came to see the shelter as “holy ground,” so he moved in for an entire year to make sure the script he wrote got everything right. He even shot part of the movie there, and used some of the girls and their babies on screen. His approach worked because one of “Gimme Shelter’s” greatest strengths is that it shows instead of tells. This isn’t a preachy movie, but one in which we walk through Apple’s troubles with her, experiencing betrayal, loneliness, and hopelessness – followed by a rebirth of trust, healing and love.

Coming Back From the Dark Side

As DiFiore explained to me during the joint interview with Krauss, this storytelling approach is grounded in reality: “If a young lady seems like she has a dark side to her, it’s usually because she was physically abused or mentally tormented very badly. So we have professional staff that work with them. Over the course of time, through God’s love and an understanding of the Holy Scriptures, they heal.”

Krauss adds that sometimes girls who experience abuse become part of a cycle in which they abuse their own children. “But Kathy breaks the cycle when they come to the shelters,” he says. “She doesn’t force anything. She just tries to show them the way and give them courage so that they’re willing to take baby steps towards reconstructing their lives. And she shows them that not everybody is bad. The number one word I’d say that she develops with them is ‘trust.’ Because that’s the thing that was broken the most; that somebody would actually be willing to help them is something that they can’t believe when they’ve been kicked down so many times in their life and told that they’re no good and worthless…And when they trust, they give you their heart.” 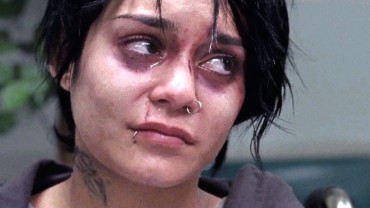 “Gimme Shelter’s” power as a story rests on the shoulders of Vanessa Hudgens’ performance as Apple. If you only know her from “High School Musical,” seeing her here will be a revelation because she transforms herself into this lost, broken character who just needs someone to show her some much-needed love and compassion.

Krauss originally wanted to cast an unknown actress as Apple, someone who “understood the streets and the intensity of that life.” Hudgens, however, had read the script and asked to audition. Krauss was impressed, but still auditioned other actresses and sent the tapes along to DiFiore for her and the girls at the shelter to review. Unanimously, they all picked Hudgens even though “they didn’t know who she was.”

Hudgens lived in the shelter for three weeks and, as Krauss explained, “She transformed and bonded with these girls. She let me cut her hair off, she gained fifteen pounds, and she became this character. Once she got to the shelter, she was Apple. Her voice changed, everything changed about her.”

A Movie and a Movement

People who have seen “Gimme Shelter” during its early limited release have been changed as well. Krauss says, “People are brought to tears – tears of joy, hope, compassion and love.” DiFiore calls it “a movement” instead of just a movie, noting that young people lined up after screenings to hug her and tell her they felt like their lives were reflected onscreen. “The movie is almost like a healing experience,” she says.

For DiFiore, her mission of healing the girls in her shelters doesn’t end when their babies are born. She explains, “We have a Special Families program. They have 165 children. All of those children were children that were born into our shelters, and we tell the mothers, ‘We will help you until your baby’s eighteen-years-old.’ And they don’t take advantage of that. We have one little girl with severe asthma. And her mother will call us and say, ‘I need this breathing machine,’ or ‘My electric bill went up,’ and we’re there for her! So we’re not just saying ‘Have your baby.’ It’s a truth that we’re your family. We’re not gonna desert you. We love you.” 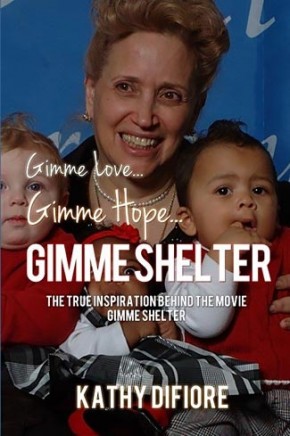 DiFiore is spreading her mission in other ways too. She’s written a book entitled, “Gimme Love, Gimme Hope, Gimme Shelter: The Inspiring Story Behind the Movie.”

And if people are inspired by the movie to open their own shelter, they can visit DiFiore’s website – www.SeveralSourcesFD.org – for her free “How to Open a Shelter Kit.’ She says, “The bylaws are there, the job descriptions, the rules, some DVDs, there’s even one on fundraising—just all the little tips on how I got started. It will probably take a year or two; it’s not easy. But at least it gives them some foundation on how to move forward. We need more shelters! There are only about 500 hundred in the whole country for pregnant women. Once this movie gets out, Tony, the phone’s gonna ring off the hook, we’re gonna we need more shelters!”

Regarding her hopes for people who see “Gimme Shelter,” DiFiore says, “I want people to get closer to God. And through the power of prayer, I want people to be inspired to do something, whether it’s for one individual that they personally know that needs help or for something greater than that, like opening a shelter. God will direct them.”

Krauss adds, “My hopes as the filmmaker is that this film will give people hope—that no matter who you are and what you’re facing, that there’s hope out there. If you think God’s not there for you, He is. If you just reach out. He’ll be there for you.” 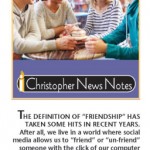 January 9, 2014
Building the Deep Bonds of Spiritual Friendship
Next Post

Happiness is a Warm House
We have heat!  I don't have Covid!  Everybody Mambo! Everybody Mambo GIFfrom...
view all Catholic blogs
What Are Your Thoughts?leave a comment
Copyright 2008-2021, Patheos. All rights reserved.