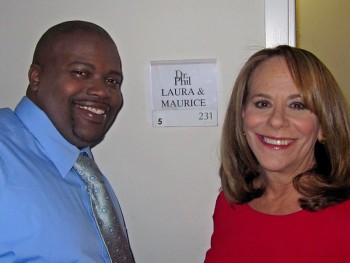 “Excuse me, lady. Do you have any spare change? I’m hungry.”

Those were the first words that 11-year-old Maurice Mazyck spoke to Laura Schroff as she passed him on a New York City street back in 1986. Schroff, a successful advertising executive, initially said, “No,” but then she reconsidered because the words “I’m hungry” stuck with her. Even at that time in Manhattan, when the streets were filled with the homeless, seeing a child asking for money was unusual.

She walked back to Maurice and told him, “I don’t want to give you any money, but if you’re hungry I’ll take you to McDonald’s and get you something to eat.”

During an interview on “Christopher Closeup,” Schroff recalled, “Maurice was pretty surprised because more often than not, people treated him as if he were invisible. We went to lunch and we realized that we lived only two blocks apart, yet we came from these two vastly different worlds.”

Schroff felt a bond with Maurice, and they continued meeting for lunch to nurture their growing friendship. Maurice, she learned, lived in a shelter hotel with his grandmother and mother, who was addicted to drugs – though he didn’t reveal that at first. Instead, he told Schroff that she didn’t have a job but spent her days vacuuming and cleaning, an image of motherhood he got from watching “Leave it to Beaver” reruns.

To a certain degree, Schroff could relate to Maurice’s parental dilemma because her father had been an alcoholic whose demons came out when he drank. “He would become very violent with my mother and my younger brother Frank. But the big difference between my life as a child growing up and Maurice’s is that I did come from a very loving home. My mother was enormously strong and faithful and was the glue to the family.”

On the topic of faith, Schroff noted that her mother was both a spiritual and religious Catholic whose beliefs influenced her own. In retrospect, she sees God’s hand at work in her life: “At the time, I’d always wanted to have a family of my own, and it was just not meant to be. I do believe that God works in strange ways, where He did put Maurice into my life because He knew he needed someone to care for him. And for me, I was looking for more in my life than just work, and I think we were brought together for that very specific reason.”

It was that mystical idea that led Schroff to choose the title of her 2011 memoir “An Invisible Thread,” which won her a Christopher Award. She was in a Duane Reade looking for a birthday card when she picked one up that said, “An invisible thread connects those that were destined to meet.” She discovered that it was an ancient Chinese proverb and thought it beautifully reflected her friendship with Maurice. 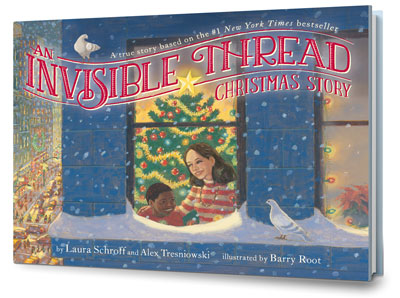 Schroff recently wrote a new book aimed at kids, called “An Invisible Thread Christmas Story,” co-authored by Alex Tresniowski and illustrated by Barry Root. She said, “The Christmas story [in the original book] resonated a lot with my readers. And it was because Maurice as a child had never had a chance to celebrate Christmas. Simon and Schuster thought it would be wonderful to bring this story to life and show children how they can make a difference during the Christmas season, and that the best gifts are the ones that don’t come in a box, how giving versus receiving during Christmastime is really important.”

One of the most poignant vignettes in the warm and inviting picture book comes when Laura and Maurice visit Laura’s sister’s home and family for Christmas. While Maurice received gifts and toys, his favorite part of the day was sitting with everyone in the dining room, sharing a meal while laughing and talking. He told Schroff, “When I grow up, I want to have a dining room table just like that.”

Sure enough, Maurice’s home today has a dining room. He’s been married for over 20 years, has seven beautiful children, and works in the construction industry.

Schroff believes that is largely due to the new possibilities he imagined after he became a part of her life. Maurice said that someone once told him, “Kid, if you continue to go down the road you’re going, by the time you’re 18, you’re either going to be on drugs, dead or in jail.”

“He always believed that was his lot in life,” explained Schroff. “Then, when he started to experience what it was like to be part of a family and to see how families reacted and interacted with each other, [he discovered] that was really what he wanted.”

What message does Schroff hope both adults and children get from reading her books? She concludes, “We all have the ability to throw a lifeline to someone in need – and if you throw that lifeline, the likelihood is that person will grab hold of it and won’t let go. Also, when ‘An Invisible Thread’ came out, I got an e-mail from a man in Arizona, and he said that he read my book and he cried. A couple of weeks later, he was at a grocery store, and a young woman with two small children had just bagged all her groceries. When she went to pay for her groceries, her credit card was declined. He said the look of hopelessness on her face was just incredible. He said, ‘I thought about your book and realized I don’t have to feed the world, but I can help this one person.’ I believe that everybody, if they’re willing to just open their eyes, they’ll see a person in need – and one small act of kindness can make a difference.”

(To listen to my full interview with Laura Schroff, click on the podcast link:) 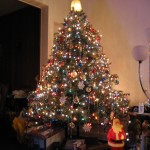 December 8, 2015
The Best Christmas Gift You’ll Ever Receive
Next Post 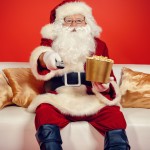