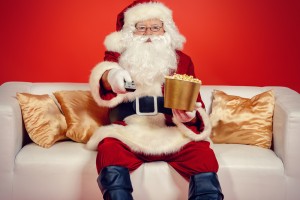 Every December, I rewatch classic TV Christmas episodes either on DVD or via reruns on cable. Series like “Frasier” and “Everybody Loves Raymond,” had multiple Christmas shows over the years, including some great ones such as Raymond’s “Christmas Present,” in which Ray (Ray Romano) hopes to get Debra’s (Patricia Heaton’s) approval to go on a golfing weekend by buying her an expensive gift – and “Frasier Grinch,” in which Frasier (Kelsey Grammer) rediscovers his dad Martin’s (John Mahoney) penchant for over-the-top Christmas decorations.

But those shows are a little more current, so here are seven of my favorite classics:

7. Happy Days: Guess Who’s Coming to Christmas – Fonzie certainly seems full of Christmas cheer when he hands out presents to all his friends at Arnold’s. And he tells everyone he’s going home for a big family celebration. But on Christmas Eve, Howard and Richie discover that the Fonz was too embarrassed to tell the truth that he had no one to spend the holiday with. Though Howard wanted to have a Christmas celebration for family only, the rest of the Cunninghams convince him to ask Fonzie to come over to fix a mechanical Santa, and then invite him to stick around for the rest of the evening. Fonzie’s subtle appreciation of his friends makes for some tender moments, as does his simple prayer before the Christmas meal in which he says, “God. Thanks.”

Watch it for free on Hulu:

6. The Mary Tyler Moore Show: Christmas and the Hard Luck Kid II – It’s Mary’s first Christmas away from home, so she has plans to go visit her parents. But her boss at the TV station WJM, Lou Grant (Ed Asner), informs her that since she’s the newest hire, she’ll have to work on Christmas Day. Disappointed, Mary accepts the decision, prompting Lou to say, “I have a feeling that when I go to sleep tonight, three ghosts are going to visit me.” Then, a co-worker who hasn’t spent Christmas Eve with his family in years convinces Mary to work for him as well. Mary prepares for a lonely holiday until her co-workers return to the office to make sure the woman “who can turn the world on with her smile” has a merry Christmas after all.

Watch it for free on Hulu:

5. Home Improvement: ‘Twas the Blight Before Christmas – This is a good episode of the classic Tim Allen sitcom in which he contends with a neighbor who wants to out-decorate him, along with a son who doesn’t want to spend Christmas with the family. But the reason it makes my list is because it includes one of my all-time favorite sight gags. It involves kids in a church Christmas pageant, each holding a letter that spells out “NOEL.” You can see it in the first 60 seconds of the clip below.

Or you can watch the whole episode here: http://www.dailymotion.com/video/x233wo1_home-improvement-3×12-twas-the-blight-before-christmas_tv

4. Family Ties: Miracle in Columbus – the money-loving Alex P. Keaton (Michael J. Fox) gets a job as a department store Santa Claus and plans on being a positive capitalistic influence on the kids he meets. But a little girl’s wish that her father, a traveling salesman, make it home for Christmas unnerves Alex’s materialistic view of the holiday. It’s a Santa-affirming episode that also milks some laughs out of dad Steven Keaton’s unwillingness to buy a decent Christmas tree. At one point, the Keatons decorate a cactus, causing Mallory’s boyfriend Nick to sing, “O Cactus Tree, O Cactus Tree, Thou art so fair and prickly.”

This one isn’t free online, so you’d have to sign up for a free trial offer at CBS On Demand to see it: http://www.cbs.com/shows/family_ties/video/TUg6OdRT7ZBJAsT__ndkZPkeyXSWlRn2/family-ties-miracle-in-columbus/ or watch if free if you’ve got Amazon Prime. It’s Season 6, episode 17.

3. Highway to Heaven: Basinger’s New York – This Michael Landon series followed an angel named Jonathan Smith (Landon) and his friend Mark Gordon (Victor French), who traveled around the country on missions from God to guide people out of troubling situations. This episode guest-starred Richard Mulligan (from “Soap” and “Empty Nest” fame) as a cynical newspaper reporter who doesn’t believe the spirit of Christmas can be found anymore in New York City. Then Smith and Gordon join him on a Christmas Eve adventure involving a homeless couple about to have a baby. While this show certainly has its schmaltzy elements, Mulligan’s slow and touching awakening to the fact that kindness still exists in the world makes for a heavenly viewing experience.

2. The Andy Griffith Show: A Christmas Story – Yes, there’s an old Scrooge whose heart gets turned around by Christmas spirit (and some spirits, since moonshine is part of the plotline), but it’s still a fun, funny, wholesome ride to the end, filled with Don Knotts’s Barney Fife playing Santa Claus, Aunt Bee’s cooking, and Andy Griffith and Elinor Donahue dueting on “Away in a Manger.” If you’re going to spend Christmas in jail, there’s no better town to do it in than Mayberry.

1. MASH: Dear Sis – This Father Mulcahy-centered episode finds the priest feeling useless because he’s surrounded by doctors and nurses who save the lives of wounded soldiers, but he finds his own efforts at ministering to their souls falling short. Though he’s collecting money for Christmas gifts for the local orphanage, he doesn’t feel he’s making a serious enough contribution to the war effort, especially after Radar asks him to talk to his mother on the phone and have him pray for their cow in Iowa who’s giving birth. Father Mulcahy gets so agitated that when an unruly soldier gets physically violent with a nurse, he punches the soldier in the jaw – and feels horribly guilty about it. Hawkeye tries to lift Father Mulcahy’s spirits, so at the 4077 Christmas party, the whole camp gathers to sing “Dona Nobis Pacem” together as a tribute to the quiet strength that Father Mulcahy gives all of them, even if he doesn’t realize it. It’s one of television’s all-time most beautiful (and most Catholic) moments that should be a must-see every holiday season.

This one is only available on Netflix. It’s season seven, episode 15.

Feel free to share some of your own favorites. Merry viewing! 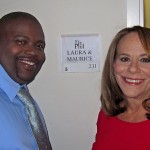 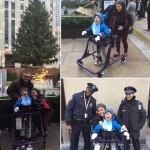 December 11, 2015 A Disabled Child Finds Joy & Encouragement Around Rockefeller Center Christmas Tree
Recent Comments
0 | Leave a Comment
"What was the name of the gentleman you were speaking to on CHristopher Closeup Sunday ..."
Katie Raggio Hossley Jimmy Kimmel Deserves an Emmy For ..."
"What a great article! Always loved the chracter and how it was developed from the ..."
Rick Malloy, S.J. The Catholic Church (and the Jesuits) ..."
"I loved the show and Father Francis John Patrick Mulcahy S.J played by the actor ..."
Fr.Ed Wade,CC The Catholic Church (and the Jesuits) ..."
"What a great tribute to a fine actor. As a Catholic I was never more ..."
RajunCajun The Catholic Church (and the Jesuits) ..."
Browse Our Archives
get the latest from
Catholic
Sign up for our newsletter
POPULAR AT PATHEOS Catholic
1