These Olympians Remain Grounded in Their Catholic Faith 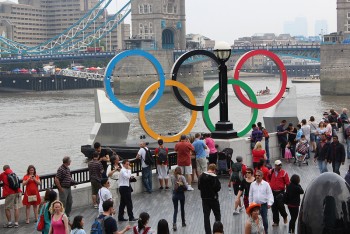 As a sucker for a good story, I always look forward to the Olympics because they’re full of them. I love watching the joy in athletes’ faces as their tireless efforts pay off in a medal of some sort. Of course, gold is the objective, but there’s no shame in silver or bronze either. The 2016 Summer Games are off to a great start for Team USA, including some favorites who are also people of faith.

For instance, Katie “The Terminator” Ledecky won her first gold medal of this Olympics yesterday in the 400m freestyle. I call her “The Terminator” because she’s so dominant in the pool that she terminates all her opponents.

That was true when she was a complete underdog in the 800m freestyle four years ago in London (which I wrote about here) – and it still holds true today. And in case you missed Kelly Seegers’ interview with Ledecky for The Catholic Standard, you’ll be interested to know that success hasn’t made her lose sight of her faith.

Ledecky’s godfather is a Jesuit priest (Fr. Jim Shea), and she graduated from two Catholic schools – Little Flower School (elementary) and Stone Ridge School of the Sacred Heart (high school). She said, “I received an excellent, faith-filled education at both schools. Having the opportunity to attend academically rigorous schools has facilitated my interest in the world and in serving others, and has enriched my life so that it is not solely focused on my swimming and athletics. Nevertheless, going to these schools was important to my swimming – my Catholic schools challenged me, they broadened my perspective and they allowed me to use my mind in ways that take me beyond just thinking about swim practices, swim meets and sports.”

Ledecky also had this to say about her Catholic faith and prayer life:

How do you rely on your Catholic faith to sustain you through your training and racing?

Ledecky: “My Catholic faith is very important to me. It always has been and it always will be. It is part of who I am and I feel comfortable practicing my faith. It helps me put things in perspective.”

Do you still say a “Hail Mary” before each race? How did you decide upon the Hail Mary as your go-to prayer?

Ledecky: “I do say a prayer – or two – before any race. The Hail Mary is a beautiful prayer and I find that it calms me.”

You can read the whole interview here.

In addition, over at Aleteia today, Philip Kosloski writes about the Catholic faith of 19-year-old gymnastic dynamo Simone Biles:

Faith has been one of the only constants in her rather difficult life. Biles was born in Ohio to a mother who was battling drug and alcohol abuse and at the age of three she was taken away from her mother. A social worker called her grandparents in Texas who willingly took her in and eventually adopted Biles and her younger sister, “Go ahead and send the kids to us…I didn’t want them to be raised by a stranger.”

Biles now calls her grandparents “mom and dad,” and attends Sunday Mass with them. They have been a big influence in her life and have supported her from the very beginning.

Also, Olympic fencer Katharine “Kat” Holmes remains grounded in the faith she learned growing up as a parishioner in the Shrine of the Most Blessed Sacrament parish in Washington. Kelly Seegers from The Catholic Standard writes:

How have the communities at Annunciation and Blessed Sacrament supported you in your fencing, or in other aspects of your life?

Holmes: “While I have not lived in D.C. for the past six years, I have carried my faith with me all throughout my training and travels. The great thing about being Catholic as that all Catholics are your family. It doesn’t matter whether I am in D.C., Princeton, or even Qatar, I have always been able to find members of my family to turn to in times of both need and joy.”

How does your Catholic faith personally help sustain you?

Holmes: “Particularly this year while qualifying for the Olympics, I had an almost ongoing conversation with God, constantly asking for reassurance and strength that I could do it, that I really could qualify, that I could keep going. When things were really getting rough, I remembered a line from ‘Chariots of Fire’ in which, when talking about running, Eric Liddell said, ‘God made me for a purpose, but He also made me fast. When I run, I feel His pleasure.’ This is largely how I feel about my fencing. God gave me such a gift through and in this sport and in following my dreams, I feel as if I am living the life He wished for me, utilizing all that He blessed me with.”

These are just a few of the stories of inspiration coming out of the Rio Olympics. That’s why, even if you’re not generally a sports fan, the games are worth watching. The athletes are models of hard work and determination that can give anyone a lesson on pursuing success and being grounded in faith. 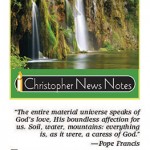 August 2, 2016
Enjoy the Wonders of God's Good Earth
Next Post 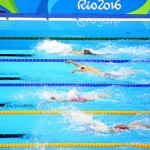 No, God Did Not Send Coronavirus...
On the Catholic Beat
Related posts from Christopher Closeup

A Quick Request for April
Hey friends, I am very embarrassed to do this during Triduum but...

I Will Spend Good Friday in Fasting and...
Tomorrow is the day we remember that the Lord of all Life...
view all Catholic blogs
What Are Your Thoughts?leave a comment
Copyright 2008-2020, Patheos. All rights reserved.