As we’ve interviewed the young people of the Occupy generation, we’ve witnessed them giving birth to an embodied spirituality that deeply values authenticity…balances concept and experience… combines creativity and compassion with a passion for justice…celebrates unity within diversity…and practices joy, fun and the fullness of life.

An Excerpt from Chapter 2 of Occupy Spirituality: A Radical Vision for a New Generation
by Adam Bucko and Matthew Fox, published by North Atlantic Books, copyright © 2013. Reprinted by permission of publisher.

ADAM BUCKO: The sixth point is that this new spirituality is more democratic. As a result, the role of the teacher changes from a traditional tell-you-what-to-do teacher to a spiritual friend. The role of the teacher is to point students back to their own experience and to name their experience for them so that they can start paying attention to the movement of the spirit within. Discernment becomes a big part of this new democratic and dialogical way of being. Elders are not so much recognized for their titles, résumés, or fame, but rather their ability to relate to the younger generation from their lived experience.

Our friend Jamie Manson, who writes for the National Catholic Reporter and in whose prophetic column, “Grace on the Margins,” I always find deep nourishment and encouragement, related to me a profound story of this change in the youth. In teaching theology, she often assigns her students the task of designing their own religion. In the many times she has done so, no one has designed a priesthood or a hierarchical leadership structure. The students’ religions are always built around small communities working with a collaborative methodology. The bulk of what the communities do centers around meditation, which I find very, very interesting. Everyone, even students who have never meditated before, seem to know that something in their spirit longs for it. It is so telling that if left to themselves, the youth would design religious frameworks that are completely at odds with traditional religious structures.

This new spirituality is much more about taking off the masks of pretense and cultivating genuine heart connections that inspire growth in both elders and youth, rather than in keeping with tradition or respecting authority. It is all about true aliveness and entering into life in a more full and deep way.

MATTHEW FOX: … The whole idea that we ’re not eternally bound to hierarchy, to monarchy in any of its forms, to dictatorships—even benign ones—that we ’re not just in vertical relationships. We’re in horizontal relationships also, and we are individuals. That is, I think, one of the major accomplishments of the modern-era enlightenment consciousness: the dignity of the individual. That spirit works through democratic and horizontal directions and through circles, not just down from ladders.

… This is not just about a secular, political shift of power. It is a spiritual insight, and it’s not unrelated to the teachings of Jesus and the Cosmic Christ and Buddha and the Buddha Nature, and so forth. The notion is that the spiritual works through democracy, through a shared distribution of power, through debate and disagreement and compromise, and through every citizen having an insight about what life is about. So again, it’s about moving from the vertical idea to horizontal.

Now this does not mean that you’re without leadership. But it means that, first of all, leadership can evolve, and no one is meant to be a king for life, and we have to elicit leadership from one another. And it’s not an ego trip; therefore, it’s not a power trip. Leadership is, again, a mode of service, as Jesus tried to teach. So it’s not as if we’re without a leader, but that ultimately the leader is responsible to the group itself, and the group is responsible for itself. You’re not surrendering power to some kind of individual.

ADAM BUCKO: There’s an element of trust at play, too. Trust in human nature and human insight, and trust that we can relate to each other in such a way that allows wisdom to come through everyone participating in it. It doesn’t mean that people don’t have different gifts or different callings. It just means that there’s a fundamental respect for what our gifts are and a trust that those gifts are there.

Seeing the outright corruption and abuse of power that fill the headlines these days, we want to ask you – what if you could experience a society guided by principles such as those these young people have described? What if you could develop your own leadership skills based on these principles? How would your world change?

September 11, 2013
Spirituality: Where Seriousness and Playfulness Meet
Next Post

September 16, 2013 Occupy Spirituality: Creating Communities in the Service of Life
Recent Comments
0 | Leave a Comment
Browse Our Archives
Follow Us! 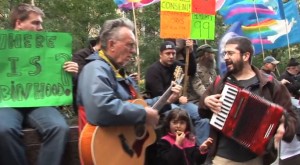