Is Prayer Equal To Worship?

As a cradle-Catholic who had converted to Evangelical Protestantism in my late teens, one of the factors that led me to consider abandoning the faith of my heritage was the seemingly unbiblical practice of praying to Mary and the saints.

After attending a youth Bible camp for a couple summers, I learned from my Christian peers about the implications of prayer. Because the first of the Ten Commandments says, “You shall have no other gods before me,” 1  my Evangelical friends would often say that prayer is synonymous with worship. Due to my poorly-catechized knowledge of Catholic teaching, my understanding of what prayer really meant had been completely overhauled.

With this in mind, I understand the amount of apprehension that comes with the thought of praying to someone who isn’t God. In my Evangelical years, I wasn’t willing to compromise a relationship with a jealous God over what seemed like a non-negotiable rule.

Protestants often say that dead people can neither hear prayers nor be aware of what happens on earth. But after over a decade of identifying as an Evangelical I eventually wondered, if God grants us eternal life through faith in Jesus, wouldn’t the saints in Heaven be more alive than ever? You’d think that a soul being exposed to God’s glory after death would actually have their awareness of the world somehow enhanced as opposed to being completely diminished. 2

The Bible is considered to be the sole authority from which Protestant Christians derive their basis for morality and spiritual practice. Granted this, the two most common objections Protestants have against prayer to anyone other than God are as follows:

What often irritates me is when Catholics try to defend praying to Mary and the saints by claiming they don’t actually ‘pray’ to the ones they pray to. Rather than beating around the bush, I think Catholics need to cut to the chase and call prayer for what it is.

First, it is important to point out that the Catholic Church does affirm that Jesus is the only mediator between God and man. 5 The Bible does not explicitly state that all forms of prayer are synonymous with adoration, but it does present petitional prayer between humans as an example of intercession. Two examples in Scripture (most notably in the King James Version) would be when Abraham pleads to Sarah,

“Abraham to his wife: “Say, I pray thee, thou art my sister: that it may be well with me for thy sake; and my soul shall live because of thee.”
– Genesis 12:13 KJV

…and when Bathsheba makes a request of King Solomon,

“Then she said, I desire one small petition of thee; I pray thee, say me not nay. And the king said unto her, Ask on, my mother: for I will not say thee nay.”
– I Kings 2:20 KJV

Often when Protestant Christians refer to the priesthood of all believers 6, they are actually acting as ‘mediators’ to pray for them. Although we are free to approach Christ on our own, if nobody prayed for each other it would imply that the individual members of the Body of Christ do not work in unison. 7 If a kingdom divided against itself would not stand 8, there ought to be some kind of relationship between the saints on earth as well as the saints and angels in Heaven – which the Apostle Paul describes as being ‘surrounded by a cloud of witnesses.’ 9 Another example from Scripture that comes to my mind is the description of the saints in Heaven presenting the prayers of the people on earth to God. 10

Secondly, necromancy usually involves invoking spirits from the netherworld in order to acquire information for personal gain through the use of mediums or divinations. An example in Scripture would be when King Saul consults with the Witch of Endor to contact the late prophet Samuel – to which Samuel reprimands Saul for doing so. 11

Another example of contact with the dead would be when Moses and Elijah appeared with Jesus to the disciples in the Transfiguration. 12 Some would argue that, since Jesus is God, that he can summon souls at will – which I believe is true. But I think if we are called to be imitators of Christ 13, I think the Transfiguration implies an interconnected relationship between those in Heaven and those still living on earth.

When Catholics petition the saints to pray for them, it is usually followed by the words, ‘Pray for us!’ This does not involve acquiring information from them; although some Catholics are known to pray to specific patron saints to acquire certain material or blessings for personal gain – which to me does lean toward necromancy which is condemned by both the Bible and the Catholic Church. 14 The way it works is the saints themselves cannot grant anyone any blessings, yet they continue to pray for those on earth even if the communication seems one-sided.

I don’t believe praying to Mary or the saints is unbiblical, nor should anyone feel coerced into praying to someone who isn’t God. But I think it is beautiful and comforting to know that the Church as the Body of Christ is not limited to those living on earth, but extends to those in Purgatory and the triumphant in Paradise.

“First of all, then, I urge that supplications, prayers, intercessions, and thanksgivings be made for all men, for kings and all who are in high positions, that we may lead a quiet and peaceable life, godly and respectful in every way. This is good, and it is acceptable in the sight of God our Saviour, 4 who desires all men to be saved and to come to the knowledge of the truth.” – 1 Timothy 2:1-4 RSV 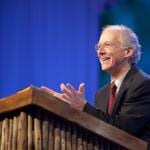 January 1, 2019
A Response to John Piper on Catholicism
Next Post 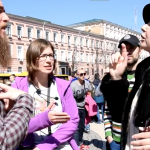 January 7, 2019 American Evangelical Preaching In Ukraine Gets An Earful From Eastern Orthodox Lady
Recent Comments
2 Comments | Leave a Comment
Browse Our Archives
get the latest from
Coffee and Crucifix
Sign up for our newsletter
POPULAR AT PATHEOS Catholic
1