Reading Chronicles of Narnia During Easter

My kids have always loved listening to stories. Over the past year they have gotten old enough to appreciate more complex stories. Last year we read Tolkien’s The Hobbit. I watched as their imaginations took off skyward. Their playtime included hiking up the Lonely Mountain, lurking through spider-infested forests and slaying fire-breathing dragons. After finishing The Hobbit, the boys couldn’t wait to see where the next adventure would take them. They wanted to continue on to read The Lord of the Rings, but due to their age I decided to steer them towards The Lion, The Witch and the Wardrobe by C.S. Lewis instead.

On the day before Good Friday, we happened to complete the chapter where Aslan offers himself as a sacrifice. As the Witch’s beasts and minions bound Aslan to the Stone Table, they tormented him and shaved his mane off. Then the Witch and her followers proceeded to mock Aslan before she drove the blade into his side, thinking victory was on her side. All this had taken place as the girls Susan and Lucy helplessly watched while hiding.

For a children’s novel the scene is quite disturbing, but descriptively mild in comparison to the Passion of Christ. My boys were distraught by the Witch’s vileness and unsure why Aslan gave himself up without putting up a fight. But when put into the perspective that the laws of the Deep Magic required Edmund to be turned over to the Witch for betraying Aslan, it made so much more sense why Aslan did what he did. The children’s affection for Aslan was relatable to loving a giant, pet cat, which only makes his death even more of a punch in the stomach for adolescent readers. But to me, this is what makes it the perfect primer for understanding Christ’s passion.

The image of crucifixion is a violent one to behold. It’s not easy to explain to a child why someone endured such an awful death. When my oldest son was three years old, during Mass he pointed to the crucifix hanging above the altar and whispered in my ear why a guy nailed to a cross. The easiest way I could answer on a whim was it was a picture to remind us that ‘the bad guys nailed him to that cross.’ As they have gotten older it became easier to talk about how Christ died so that we might live and be freed from our transgressions.

On Saturday, we finished the last few chapters to reveal the Stone Table had been broken in two and Aslan had risen from the dead! After such a dark, traumatizing chapter, my kids lit up at the first mentioning of Aslan being alive and well. A small picture into how the disciples must have felt when they found out their Lord was alive. What a unexpected surprise!

Reading Chronicles of Narnia to my kids has given me a whole new appreciation for the simplicity of C.S. Lewis’ storytelling, but also a glimpse at what meeting Christ in Heaven must be like. The beauty of the Resurrection on Easter is all the more beautiful when viewed through the eyes of a child. 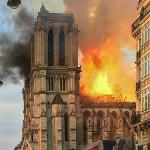 April 16, 2019
The Fire of Notre Dame and the Theology of Architecture
Next Post 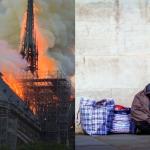 April 28, 2019 Rebuilding Notre Dame versus Caring For The Poor?
Browse Our Archives
Follow Us!

Not a Gumball God - A...
Faith on the Couch
Related posts from Coffee and Crucifix