Has The Church Failed Persons With Developmental Disabilities?

Has The Church Failed Persons With Developmental Disabilities? May 15, 2019 René Albert

Having a sibling with a developmental disability certainly gives you a different perspective of the world. Much of my early family life revolved around ensuring my brother with low-functioning autism was receiving adequate care and support through school and at home. Though the struggle to maintain his quality of life has been ongoing to this very day.

Many of my peers in school considered my family to be somewhat abnormal. While some complained about fighting with their siblings, my relationship with my brother was one where I couldn’t exercise any form of aggression. This isn’t to say that I’ve never fought with my siblings. But the difference was their conflicts were often provoked by an act of the will; whereas the struggles between me and my brother were often due to his high-sensory anxiety and limited ability to communicate. This was something he had absolutely no control over. And given our diametrically different family dynamics and values, I was often the subject of bullying among my classmates.

I remember witnessing my parents having to endure blatant ignorance and ridicule from some members of our own community. My brother would occasionally cover his ears and moan when something would trigger him, even in public. Sometimes he would throw himself on the floor, kick his legs and wail in agony. My parents would try to console him while people would stop and stare, shake their heads or laugh amongst themselves. Some would even go as far as mockingly imitating my brother’s meltdowns. I don’t recall a single moment when a bystander would try to empathetically intervene. Yelling or invoking fear was also never effective in helping my brother work past his anxiety. Figuring out a way to alleviate his emotional stress was often a process of deduction.

In high school, I’ve noticed many who had special needs were automatically shunned or ridiculed. Some were teased to the point of tears or traumatized in such a way that they had to change schools. Even I have a difficult time visiting the former site of my old school because of the bullying and harassment I’ve endured. I couldn’t begin to fathom how much worse it must feel for those who have limited abilities to express their thoughts and feelings.

My brother rarely came to Mass with us due to his difficulty to sit still and keep quiet. Our local parish was dwindling in attendance, but many of the remaining parishioners were of the older, ultraconservative mentality. In rural Catholic culture, having a child with a disability was sometimes viewed as a direct result of unabsolved sin. Often one of my parents would stay home with my brother while my other sibling and I would accompany the other parent to church.

In light of this, I truly admire how my parents graciously handled my brother’s emotional meltdowns in spite of what people thought. I never learned to appreciate how much they have done until I had kids of my own. Though the treatment my family received from our community played a role in why I chose to leave Catholicism after high school to become Protestant.

As a young adult, I volunteered as a counsellor at an Evangelical Bible camp; once for a week-long summer retreat for disabled persons and once for senior-high kids over a weekend at the beginning of the school year. The campers in both retreats had simple desires to be treated with dignity, given the freedom to choose what activity to partake in and, above all, to be loved for who they are. Yet the group dynamics of each retreat made for two completely different atmospheres. Interestingly enough, I found counselling mentally disabled persons much easier than dealing with high school kids. The frustrating part about dealing with rambunctious teenagers was having to deal with kids who were trying to prove a point through willful disobedience and disrespect, yet the mentally disabled campers usually weren’t trying to prove anything at all. They just wanted to be loved and enjoy their time at camp.

Usually the only problems among the disabled campers were when they grew sick, lost control of bodily fluids, or emotional triggers that required us to change their scenery. But one particular situation that struck me was when one camper had trouble sleeping in the middle of the night. While my co-counselor and I were trying to figure out the cause of his anxiety, one of the camp directors grew impatient and resorted to invoking fear in the camper by threatening to call the police on him. While it may have forced him to quiet down for the rest of the night, it left the camper emotionally distraught. Both my co-counselor and I were quite livid with how the director dealt with the situation, especially considering that this retreat was supposed to be a safe haven with Christian values.

Ironically, I had a personality clash with a man while organizing a church event. He was at least 20 years older, rather socially awkward and wanted to do things his way. As the event day loomed closer, I paired him up with another volunteer to help things go more smoothly. Little did I realize that giving him a partner would set him off. He had the impression I was replacing him and proceeded to call me a bad man. Initially I reacted angrily and told him he was acting juvenile for his age. One of the church elders later told me he had a mental disability that limited his ability socially function, let alone maintain employment to support himself.

I realized, in spite of having a sibling with autism, even I have the capacity to treat those with disabilities with the same kind of ignorance as those who mistreated my brother. Perhaps if I had practiced the same kind of thoughtful prudence with him as my own sibling, our confrontation might have been much more pleasant, especially for him.

Because of these experiences, I struggle with having a positive outlook on how the universal church treats those who are disabled. I understand the actions of individuals do not reflect the overall values of a religious group. But sometimes it seems like all it takes is one drop of poison to ruin an entire well. Similarly, one toxic person who treats the vulnerable horribly can break a person’s trust in what should be a safe community. Though I am certainly glad society has moved beyond attributing developmental disabilities and mental health issues with demonic possession. Even still, some communities have a long ways to go in fully understanding the complexity of the human brain. As much as reading about the miracles Jesus performed in the Gospels are inspiring, I think we have to realize what some people consider ailments are not always meant to be ‘fixed.’ Some might call their conditions the result of Original Sin. But how can anyone force them to comply to church culture when the ability to comprehend something as simple as faith could possibly be beyond their control?

Now that I’ve returned to Catholicism, one of the parishes I attend has only a few rows of pews while the rest of the floor is sitting space. There is a family who attends every week who brings their developmentally disabled son. I have yet to get to know them, but their son’s demeanor is eerily similar to my brother’s. During mass he will moan, cover his ears and sometimes shake his wrists — yet no one would raise an eyebrow. He comes to Mass to receive the Eucharist and is welcomed as an equal member of the Body of Christ. Such a beautiful observation makes me long for other Catholic parishes like the one I was raised in to practice a similar form of inclusivity.

My brother’s value is not measured by his disability. He loves his family and he has the kindest heart. Whenever my kids visit him, he pulls out old VHS movies from his collection to lend to them. His face beams with delight whenever my kids give him a card or gift for his birthday. He’s left in shock when relatives pass away. He cries at the realization that death is a reality and that my parents will not be around forever to care for him. He has a soul, just like you and me. And like every other life made in the image of God, he desires and needs to be loved and cared for.

If there is a lesson I have learned through all this, it’s easy to throw blame on institutions or society in general. I have every reason to resent the Church for how my family has been treated, but I think the problem starts from the heart. If we each don’t look inwards and observe our own need for God’s grace, how can we collectively show a sliver of compassion for those who are marginalized most vulnerable?

Because if we as individuals can’t see Jesus in the faces of those with developmental disabilities, how can we ever hope to see him anywhere else? 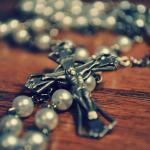 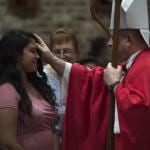 May 18, 2019 Confirmation: The Sacrament of Farewell?
Browse Our Archives
get the latest from
Coffee and Crucifix
Sign up for our newsletter
POPULAR AT PATHEOS Catholic
1