Do You Still Remember “The Good Ole Days”?

Do you remember the good ole days when you were poor and powerless, but you knew you belonged to a religion that was “the one, true Church”? Wasn’t that really comforting? Didn’t it make up for the fact that you lived in this “vale of tears”, because not only were you guaranteed heaven in the afterlife, but you had the added satisfaction, in this life, of knowing that you were one of the chosen ones? Didn’t those twin beliefs make any vicissitude bearable?

You followed an infallible leader who, himself, was a “prisoner in the Vatican”, surrounded by hostile, secular and atheistic regimes, but piously suffering these indignities as he communed daily with God and channeled infallible teachings from Jesus to his scattered, global flock in a series of inspired encyclicals. You had simple, black and white guidelines (the ten commandments of Moses, the six commandments of the Church and the provisions of the Code of Canon Law). Basically, all you had to do was avoid sex, abstain from eating sausages on Fridays and go to mass on Sundays.

If you kept all of these, you were guaranteed heaven. You could even claim a spot ahead of time by doing the “nine first Fridays” (confess your sins, receive Holy Communion, and pray for the pope’s intentions on the first Fridays of nine consecutive months.) Even if you subsequently led a life dedicated to debauchery, when you met Peter at the pearly gates, you could give him a wink and a nod and say, “dude, check the records, I have a reserved seat!”

If you didn’t do the nine first Fridays, and were about to die in mortal sin, you could get shriven by a priest, and get out of jail free. If a priest weren’t available, you could say an act of perfect contrition. That way, also, you forced Peter to admit you. Now an act of perfect contrition is a strange bird, because it meant that at the hour of death, after a lifetime of ignoring God, you were genuinely contrite that your sins had offended God. Any hint that your sorrow was merely a fear-based ruse to avoid hell, would void the warranty and you’d be destined instead for auld Nick’s place.

To make things even easier, the church provided us with a catechism. That way you didn’t have to figure out any of the answers; or even any of the questions. (I must confess here that I am guilty of writing a catechism myself, in Swahili, while I lived in Kenya.) No priest, during my childhood, ever encouraged his flock with Socratic questions; and when a priest was stumped by the query of a curious child, there were two classic responses: “It’s a mystery; you’re not supposed to understand it” or “you must have faith.”

When you finally made it through the pearly gates and were escorted to your appointed seat, part of the joy and reward of heaven was that you had a spectator’s seat to look down at the suffering of the damned.

And, then, there was a very simple and elegant hierarchy. At the apex was the pope, the infallible vicar of Christ; below him was the Curia – a band of Seraphim; followed by the lesser cardinals – archangels every one. Bishops were angels and priests were saints. At the bottom were laymen; and at the very bottom were lay women. But this was a hierarchy with a difference because even the lowliest Catholic lay woman was more precious, in God’s sight, than a male Protestant prince or pagan president.

Beyond this glorious pyramid lay the slums, populated by the “perfidious Jews” who killed God and rejected Jesus, the dumb Protestants who blew their chance of salvation by seceding from the one true church, and utterly ignorant pagans who never had a chance to begin with – this included most all of the residents of Africa and Asia.

As a boy, I marveled why each country in the world didn’t simply elect a Roman Catholic bishop as president so that instant peace, prosperity and justice might break out. Then I read about the Borgias, the inquisition, the crusades and the conquistadors; and the first niggling doubts raised their pernicious heads. No amount of denial managed to dispel them; and there was no encouragement from any “authority” to bring them into the open, research them, talk about them and resolve them.

The end of the good ole days

This entire edifice began to crumble under the twin laser beams of ecumenism and intelligence. Vatican II, which oiled the rusted hinges and opened the shutters of Roman Catholic theology, allowing the wind of the Spirit – Ruah Yahweh – to clear the cobwebs of two millennia of close mindedness, ushered in a new era of dialogue with Jews, Protestants and Pagans.

Now the old certainties are gone and suddenly life is much more complicated. Part of me yearns for the safety of the old prejudices which made all the sufferings of incarnation worthwhile. Of course, how an all-merciful God would reward the sufferings of the “others” by further consigning them to everlasting suffering in hell, is a bit of a conundrum.

So, we gotta problem. What happens when we can no longer call upon our gender, socio-economic status, caste, creed, color, religious affiliation or national identity to make us feel special? Well, we can either sink back into the awful anonymity of the faceless masses or we can soar into Unity Consciousness whose currency is unconditional love for all of God’s creatures.

Incarnation, then, is not about being special; but it is about being unique. The last things God-the-grandmother whispers in the ear of every soul who volunteers for planet Earth (or any other world) is, “don’t forget your secret name; and don’t forget your sacred mission, which is to awaken your planet to Christ Consciousness.”

Possibly the most impressive peaceful mass transition of power, in human history, took place in South Africa under the inspired leadership of Nelson Mandela, archbishop Desmond Tutu and the Truth and Reconciliation Commission. Based on the three concepts of confession, contrition and forgiveness, centuries of cruelty, oppression and discrimination were expunged. But, unfortunately, it has not lasted. The new governing party of South Africa, the ANC (African National Congress) has proved itself every bit as corrupt as the colonialist Boers had been. Poverty continues among the Black community who are now joined by a new wave of homeless, hopeless White South Africans who live in tent cities.

But, in truth, that situation and many like it, do not appear to be driven mainly by revenge, though it may be a minor factor, as much as it is by the corruption of power. There is a huge difference between power per se and power over. Power over is the megalomania born of a scarcity mentality and fanned into full anxiety by the fear of being powerless. Power per se is the full alignment with our God-given nature, and the recognition of that same nature in all other creatures. Any power struggle, then, is seen for what it really is – your right hand attempting to arm wrestle your left hand.

Why don’t you, instead, just shake hands with yourself? 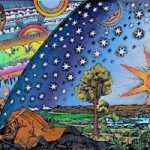 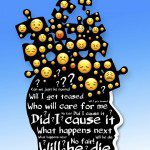 March 7, 2017 Justice and Forgiveness – Strange Bedfellows #1
Recent Comments
0 | Leave a Comment
Browse Our Archives
get the latest from
Companions on the Journey
Sign up for our newsletter
POPULAR AT PATHEOS New Visions
1