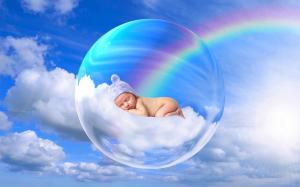 What do you think it would be like to open your eyes as a day-old newborn, and find yourself being held in the tender loving embrace of a young, ageless mother? To find yourself looking into awestruck eyes that gaze adoringly at you? To feel the smooth satiny texture of her full breast under your searching little fingertips. To taste the nurturing comfort of a milk-tinged nipple between your pink, puckered lips? To hear her worshipful crooning words as she intones the universal music of mother-baby talk? What if you realized that this young, ageless, adoring, crooning mother were God Herself, and that you were Her only-begotten babe?  Could you ever subsequently feel fear or anxiety, guilt or anger?

What if another figure were looking over Her shoulder at you, smiling proudly?  What if He were a young, ageless father, with strong, white teeth, broad shoulders, sparkling eyes; and whose voice made your heart leap in the pure ecstasy of mutual recognition? What if you realized that He is God your Heavenly Father, and that you are His only-begotten babe? Could you ever subsequently feel vulnerable or unimportant?

But ‘how can that be?’ you ask. How can we all be God’s only-begotten child? And how can we each be loved with all of God’s attention? Pardon me if I use a mathematical metaphor, since God majored in math. God is eternal and She is infinite in all of Her “qualities.” You, too, are an infinite and eternal being.  To explain further, let me state a basic mathematical principle: not all infinities are equal. Take the positive integers, for example e.g., 1, 2, 3,…. This is an infinite series. Similarly, the negative integers (-1, -2, -3,…) are infinite.  Now, here’s the beauty: all of the integers taken together – positive and negative (…-3, -2, -1, 1, 2, 3, …) is also an infinite series, but it “seems” to be twice as big an infinity as either the positive or negative integers alone! Mathematicians call this “countable infinity” – strange term but mathematically correct.

And it gets “curiouser and curiouser.”  If you take the “irrational numbers”, this series, also, is infinite; but it is an uncountable infinity!  (By the way, “irrational numbers” does not mean numbers which make unreasonable decisions or ones that are distracted by their emotions – an irrational number simply means a number that cannot be expressed as a ratio of two integers.)

Now let me get back to God’s only begotten.  You are like an integer, a stand-alone number.  Let’s say you think of yourself as a “7”. Then surrounding you, on both sides, are an infinite amount of other integers. God is all of the numbers. She surrounds you with infinite love. To all intents and purposes, there is only you, doted on, loved unconditionally and held eternally in an embrace of compassion because of your adorable littleness. How could you ever be afraid?

But here is the rub: you volunteered to incarnate in order to discover and recognize all of God’s other only-begottens; and to learn how to love them as the Heavenly Father and Divine Mother do.  It’s really not that difficult, because if you look closely, you’ll see that each one is the spit and image of the parents.  When you really get that, you laugh from your belly because you realize that when you really see the lamb, the humming bird, the rainbow trout and the mosquito, you suddenly realize that you are looking in a mirror; that God the Mother and God the Father are looking over your shoulder into the mirror; and that everything the mirror reflects is merely the morphing forms of God in this play called Lila. 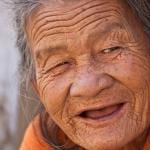 October 6, 2020 Ciotógs and Lefties and the Like
Recent Comments
0 | Leave a Comment
Browse Our Archives
get the latest from
Companions on the Journey
Sign up for our newsletter
POPULAR AT PATHEOS New Visions
1

10 Jesus quotes hidden by the...
Wake Up Call
Related posts from Companions on the Journey 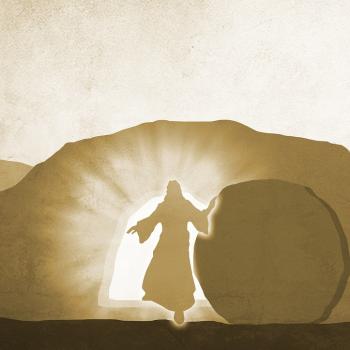