Is God Really A Father? 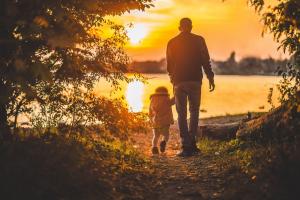 I awoke in the middle of the night with the sudden realization that, before Jesus, no other great religious thinker had ever called God, “Father” – and not just “father” but “daddy!” Not Lao Tzu, nor Confucius; not the Buddha, nor Mahavira, nor Zoroaster; not the Hindus, nor the Hebrews, nor the Greeks.

So, how did he come to that realization? Or, how did he develop the chutzpah? The earliest time we hear it is in Luke, Chapter 2, where he was lost for three days in the temple in Jerusalem, as a young bar mitzvah boy of 12 years of age. When his frantic parents finally found him and his mother scolded him for causing them such pain, his response was, “didn’t you realize that I must be about my father’s business?!”

B. What Does That Mean?

There are many ways to unpack this, and each exegesis creates its own theology. Let me suggest a few. Firstly, it might mean that he – Jesus – is God enfleshed; that he was a unique incarnation of the divine Source. John’s Gospel would suggest that version e.g., “In the beginning was the Word, and the Word was with God, and the Word was God … and the Word became flesh and dwelt among us.”

A second version might be that Jesus was claiming a unique biological relationship to God. We find this in both Matthew and Luke where the Holy Spirit “overshadows” Mary and causes her to conceive. This has shades of Genesis, Chapter 6 – a very enigmatic passage that tells us that shortly after creation had gotten started, “the sons of God found the daughters of men to be very attractive and took them to wife, as many as they chose” – thus, giving birth to the “Anakim”, the “mighty men of old”. This trope, of divine beings impregnating human women, is found in Hindu, Celtic, Greek, Roman, and many other traditions. So, was Jesus a hybrid, a demi-urge, whose father was an ET?

The third interpretation is that Jesus was fully human but had a unique interpersonal relationship with God. If this is true, then Jesus is claiming to be a uniquely advanced human being, without peer among previous avatars. This can be inferred from Mark’s gospel which has no claim of Jesus’ divinity.

Fourthly, it might mean that Jesus – though fully human – had a unique understanding of the relationship to God of all humans, indeed of all creatures. In this case, by calling God, “Father”, he was offering this knowledge of our relationship with Source to all of us. Strangely, John’s Gospel, whose prologue had claimed Jesus as the Divine Word made flesh, towards the end of his gospel, in the story of the last supper, introduces two fascinating ideas.

Firstly, in Chapter 14:12: “Very truly I tell you, whoever believes in me will do the works I have been doing, and they will do even greater things than these, because I am going to the Father.” And, secondly, John 17:22-23 “I have given them the glory that you gave me, that they may be one as we are one— I in them and you in me—so that they may be brought to complete unity. Then the world will know that you sent me and have loved them even as you have loved me.” This is like Russian dolls; with the human being as the outer doll, Jesus being an inner doll and the Father being the innermost doll.

In other words, calling God, “Father” is the birthright of each one of us.

Whichever way you unpack it, it represents a huge advance in theological and mystical thinking. Unfortunately, Christianity has reduced this Father, once more, to a distant demanding deity, and reduced Jesus himself to a judge, assigning us – as sheep or goats – to heaven or hell. Leave it to hierarchical institutions to turn an awe-inspiring mystical vision into a dogma-driven ghoulish nightmare.

What, then, is the meaning of the second coming? It is not the physical return of a Jesus who is now really angry that we still haven’t learned from his previous visit. Rather, it is the flowering of a seed which has lain fallow in the soil of civilization until a generation is born that fully understands that, “I (am) in them and you (are) in me.”

Could we possibly be that generation?

July 21, 2020 Why "All Lives Matter" Isn't About All of Us
Recent Comments
0 | Leave a Comment
Browse Our Archives
get the latest from
Companions on the Journey
Sign up for our newsletter
POPULAR AT PATHEOS New Visions
1

Swayed In All Directions
I doze in the hammock, and this book of voices from long...
view all New Visions blogs
What Are Your Thoughts?leave a comment
Copyright 2008-2020, Patheos. All rights reserved.