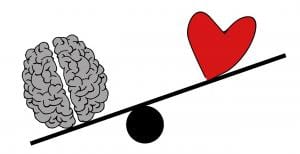 An image from childhood, of repentant Catholics beating their breasts, confessing their guilt and proclaiming, “mea culpa, mea culpa, mea maxima culpa” rises unbidden in my memory. In this essay, I want to suggest that brow-beating might be more productive than breast-beating.

I want to ask, and then answer, two questions: What is a thought? And how does it arise? I would suggest that a thought is simply a conversation between the ego and the soul. Science says that a species is organically alive if it can feed itself and reproduce itself. And that is the agenda of the ego – survival and self-replication. On the other hand, the agenda of the soul is a Unity Consciousness and Unconditional Love. And therein lies the rub; for during incarnation, these two conflicting agendas have to dock. Thought is the child of that union. The ego makes a useful servant but a dreadful master. That which was meant to be the COO of the Earth mission wants to become the CEO, president, CFO, and board of directors, all in one.

A thought is, initially, a zygote conceived of a soul-sperm and an ego-egg. For nine months, the zygote-become-embryo-become-fetus lives within the womb of this dialogue, almost completely controlled by the mother (ego). But then it’s born, separated from her and quickly develops a will of its own. Now the two – ego and thought, mother and child – are in a relationship in which each side hugely influences the other.

In time, the thought/child is fully independent of the ego/mother. Buddhism will call this a tulpa. And a thought/tulpa which is regularly the focus of attention and intention becomes a very powerful entity in its own right, and can dictate, overpower and even imprison the ego/mother while utterly ignoring the soul/father.

It gets even worse! Like an antisocial teenager, this tulpa will join with other like-minded thoughts birthed by other egos and form street gangs that can terrorize entire neighborhoods. Scaled up, such gangs can become “rogue states” that make warmongering a national past-time. For over 5,000 years such tulpas have roamed the Earth graduating from the use of cudgels to weapons of mass destruction.

Sometimes, these tulpas are given a personality and a name e.g., “Satan” or “Dracula” but mostly they are simply memes plying their trade through consumerism, national security propaganda and fake news. Jesus warned us about them 2,000 years ago – “For many will come in my name, claiming, ‘I am the Christ,’ and will deceive many. You will hear of wars and rumors of wars, but see to it that you are not alarmed. These things must happen, but the end is still to come. Nation will rise against nation, and kingdom against kingdom.”

A selfish, angry, vengeful thought is a weed that can overrun even the garden of Eden, smothering the food crops and fruit trees, hogging the sunlight and monopolizing the nutrients in the soil.

“But I tell you that everyone will have to give account on the day of judgment for every idle word they have spoken”, said Jesus. He might as easily, and as insightfully, have said, “for every idle thought.” This is not to say that God is a kind of a cosmic CPA, recording our every misdemeanor and reporting us to some heavenly IRS agent, but rather that thoughts and words create a template for action and become the prototype of the future.

These thoughts/tulpas, obviously, can lead one into bodhisattvic mysticism or into self-serving pathology. Each person, each community, each nation, even the entire species – at each stage of its incarnational journey – sits in the crosshairs whose vertical axis is transcendence/immanence and whose horizontal axis is compassion/sadism. Whichever end is watered and weeded -through attention and intention – thrives. Hence, the ebb and flow of human history. In our times – 20% of the way into the 21st-century – are we ebbing or flowing? Are we becoming Homo Spiritualis or Homo Sociopathicus?

Look at the state of our world; let us beat our brows, not our breasts, and attempt metanoia as we intone, “Mea tulpa, mea tulpa, mea maxima tulpa!”

May 20, 2020
The First Cause of All of Humanity’s Problems
Next Post

July 14, 2020 Is God Really A Father?
Recent Comments
0 | Leave a Comment
"Loved it!"
Morzen Ciotógs and Lefties and the Like
"How I admire your clarity, ty Fr. Seàn"
Gerardo Gomez Original Sin
"You and I are of a similar mind, having taught the alternate "mythology" in a ..."
Joris Heise Original Sin
"When you carefully read the actual legends about "Original Sin" some odd things emerge. "The ..."
Kyllein MacKellerann " Original Sin
Browse Our Archives
get the latest from
Companions on the Journey
Sign up for our newsletter
POPULAR AT PATHEOS New Visions
1

Fidelity to the Journey
Confidence is not the swagger or certainty with which we convey what...
view all New Visions blogs
What Are Your Thoughts?leave a comment
Copyright 2008-2021, Patheos. All rights reserved.