Who is “The Lost Sheep”? 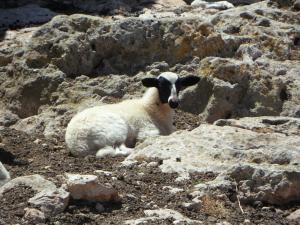 The backstory, as you well know, concerns a shepherd who has lost one of his 100 sheep. He leaves the 99 in the desert and goes in search of the stray. When he finds it, he places it on his shoulders and carries it home. Then comes the statement in Luke 15:17 quoted above.

God is watchful and goes in search of those who stray from the kingdom. He is not angry or punitive but forgiving and loving and actually carries them home. He doesn’t drive them or threaten them, “if you don’t come home, I will…” but is delighted that He’s saved them from the predators.

Two interpretations of my own

The ‘stray’ is not a ‘sinner’ but a ‘seeker’, the one who is prepared to expand beyond orthodoxy and risk exploring the esoteric. That is the one who brings a smile to God’s face and joy to Her heart. It is the soul who is prepared to leave the safety of law for the pursuit of unconditional love; the one who is brave enough to leave the security of being controlled by the self-appointed guardians of orthodoxy in order to embrace Self-empowerment. At the other side of fear lies freedom.

The great archetype of this kind of soul is Mary Magdalene. Compared to the ‘Pharisee’ in all religions, she embodies the following distinctions:

– the courage to be different vs the shackles of respectability

– fire in the belly vs mediocrity in the mind

– freedom of Spirit vs obedience to dogma

The ‘lost sheep’ is the soul with the courage to risk incarnation. The other souls prefer the safety of a pre-incarnate or dis-incarnate heaven. But    then God is denied experiences that only incarnation can bring.  They are the bees who refuse to leave the hive and so eventually starve in the absence of honey, pollen and nectar. And what does God do? She goes out – not in search of the lost soul but to search with the brave incarnate-er. And then He and carries it on His shoulders. In other words, God plays both parts and experiences fully the treasure hunt of incarnation through the brave soul.

In parallel universes God signs up to play the part of each soul who’s willing to risk incarnation. An old British proverb says, “He knows not England who only England knows.” You cannot appreciate home/heaven/Source unless you are willing to leave it and engage with the ultimate Hero’s Journey – incarnation

But no great story is devoid of fear, even existential angst, and so we plan the experience of our ‘daytime nightmares’ on a personal and even on a global level, in order to more fully appreciate love, forgiveness, patience… All of the virtues are simply what love looks like as it encounters different forms of fear.

So, what precisely is God’s role in this unfolding drama? Imagine you buy a two-way ticket for a journey that starts with us humans and travels back through the Big Bang into God’s mind; then the return leg starts with God and ends with enlightenment. Here’s what the journey might look like.

As we reverse that process, we move from Source to us. We realize then that all of creation is simply God in drag. She is playing all of the parts. In a sense, God is the first ‘zygote’ and the first division was that of transcendence/immanence. All subsequent articulations of duality are born of this trajectory; and all other phenomena are simply fractals of that initial Self-sundering.

Creation, then, is God’s imagination enfleshed.

[I will continue this essay in part two] 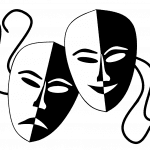 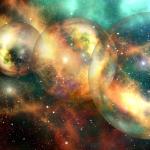 July 31, 2018 How Ya Doin’ in Yer Parallel Universes?
Recent Comments
0 | Leave a Comment
Browse Our Archives
Follow Us!