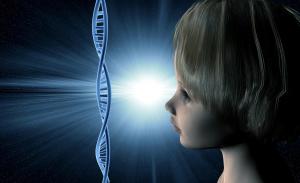 “God the biologist, We honor you. You who whirl ecstatically around your own image, In the double helix of life making, We honor you.”

That is a verse from the Eucharistic Prayer of the Cosmos, which I composed in May 2007.  Later, I had another vision about it.  I saw the spiraling ladder of Watson and Crick’s double helix of DNA, whirling around itself.  And I saw that the two curving, spiraling “shafts” of the ladder were God-love and God-light, and that the result was Earth-life.  It is an alive ladder, not just an inert artifact fashioned once and then abandoned to lean against some cosmic wall, in an unvisited corner of God’s backyard, to rot slowly in accordance with the second law of thermodynamics, together with a collection of God’s old bikes and several buckets of decaying paint from when He put the finishing touches to sunsets and flower petals.  No, it is very much an alive ladder.  It is the Jacob’s ladder of Genesis, touching Earth at a “Caol Áit” (Thin Place) that acts as a portal between the mystical and the mundane.  And Jacob understood the significance and it gave him the courage to go into combat with the divine.  For his audacity he was rewarded with a new name – Israel, which literally means, “the man who wrestled with God.”

This wrestling match is the mission of everyone on Earth who is coming awake.  Like a consummate chess master, God is aching to play simultaneous matches with all of us – if you don’t mind me mixing my games’ metaphors.  Getting thrown out of the Garden of Eden was the first round in that wrestling match.  We were not banished because of a sin, we were liberated from the prison of mere instinct, because of our courage, to venture into the luxuriant forest of free will, onto the golden, wave-washed beach of moral capacity, and up the serene mountainside of self-reflection.

And now, in the next phase of that journey-back-into-our-divinity, we are ready to challenge God to another bout. The rungs on that ladder-of-life are myriad, but I will mention just a few major steps on a safari that began with the Physiosphere, the third rock from the sun, which a Great Soul agreed to animate in order to accelerate the return home.  And the antepenultimate rung on the ladder-of-life is Christ Consciousness.  When we stand on tippy toes on that rung we can see into the womb of no-Self, no-Thing and risk dissolving into the mystery, leaving not a trace behind.  “Poor soul” those who are on the lower rungs will say, “He’s gone!”  Instead, I who loved to watch sunsets and spiders, to listen to the wind and the waves, to stroke the velvet, mossy lichen on the oak trees and the shaggy red coat of my dog, Kayla – now, I who used to DO all that, AM all that.  For now, once again, there is no me, there is only God, looking at and feeling into Her creation.

But I have gotten a little ahead of myself with the story.  So, let me talk about these rungs that connect those spiraling arms, at once giving them stability and the freedom to dance. These rungs are not made uniformly to the same exact dimensions nor even of the same stuff.  Each rung is a single-issue limited edition of a new masterpiece.

The ladder sits atop the Physiosphere, the allegedly inert stuff that physics likes to study and figure out.  Already, this apparently simple “dead” matter is highly intelligent and extremely complex.  While it is, indeed, the very ground that holds up the ladder, it is, simultaneously, the first rung of the ladder.  For this is an organic ladder; the two legs of it grow, and as they grow, they send out connectors to each other.  With the precision of two space stations docking as they hurtle along at thousands of miles per hour, so, too, these spiraling arms never fail to connect with each other.  Not a single rung dangles abandoned in mid-air, vainly searching to make contact with its partner.  Rather, with unerring accuracy, the partners dance and connect and never miss a beat.

The next level to emerge is the Biosphere, the “Life Sheath.”  On Earth this began with the lowly, long-lived bacteria, those selfless shareware seekers who first colonized the planet, learning to extract hydrogen (a very good choice since hydrogen is the most plentiful “food” in the cosmos) from sunlight, rocks and water.  This sheath has been evolving for four billion years, and it has created ever more sophisticated rungs as it journeys from single-celled creatures to multi-celled organisms of extraordinary complexity, in which sub-communities, with billions of members, accept pivotal specialties like respiration, elimination, digestion, sensation, perception…  This sphere, which contains very many rungs, embraces all life forms from the tiny trilobite, that invented the eye, to the jellyfish, that invented muscles, to the worm, that invented the brain, to reptiles, dinosaurs, mammals and hominids.

Teilhard de Chardin posited a new sheath surrounding the biosphere.  He called it the “Noosphere”; “Noos” being another form of the Greek word for knowledge.  So, it is a sheath of consciousness.  The “world wide web” and the “global brain” are modern examples of what he was speaking about.  It is a field of information and wisdom; it is the very ocean of data in which we swim; from which we download all of our ideas; and back into which we upload all of our personal musings and words.  It is rather like a reservoir from which we draw all of our water.  We have to be very careful that we do not, in turn, dump our waste and toxins into it, for then it will merely feed us back our own garbage.  It treats us so well, but if we abuse it in return, it can only subsequently repay us with our own poison.  It is environmental karma at the level of mind.  And this dance of the noosphere’s rungs and legs will lead to either great evolutionary shifts or to horrible mind-boggling mutations.

The next sphere I call the “Animasphere”, the Soul Sheath.  To remember this level and to attain it as a species, we have to discover, or more precisely, to re-discover the unity underlying all manifestation.  This is a way-station beyond all war, a place without prejudice, a state of no separation.  From this perspective violence is an autoimmune disease, selfishness is insanity, and greed is unfathomable.

Next comes what I call the “Pneumasphere” or Spirit Sheath.  Here even the notion of separate souls drops away and there is simply, Unity – there are no more waves who regard themselves as anything except expressions of one ocean; there are no more drops desperately attempting to achieve independence from the wave.  Now there is true Christ Consciousness.

But the spiral keeps dancing, all of the way into the Causal Void, the infinitively creative womb, the Formlessness of No-thing-ness which births all that is, all that has been, and all that will ever be.

You who whirl ecstatically around your own image,

In the double helix of life making, 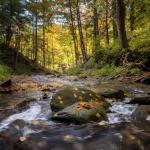 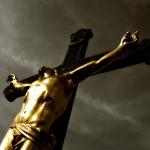 April 23, 2019 Jesus in Darkness, Why Have You Abandoned Me?
Recent Comments
0 | Leave a Comment
"How I admire your clarity, ty Fr. Seàn"
Gerardo Gomez Original Sin
"You and I are of a similar mind, having taught the alternate "mythology" in a ..."
Joris Heise Original Sin
"When you carefully read the actual legends about "Original Sin" some odd things emerge. "The ..."
Kyllein MacKellerann " Original Sin
"Nicely put."
John Purssey Original Sin
Browse Our Archives
Follow Us!