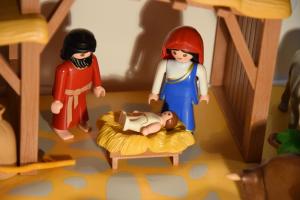 Forewarning – This blog will possibly upset you; perhaps even infuriate you. That is not my purpose. I’m hoping that it will stir up some deep thinking about, firstly, the importance of myth – properly understood as a deep truth in story form – and, secondly, how we have both advanced and regressed the Jesus myth in the 2,000 years since the original event in Bethlehem.

So, here’s the modern American version.

A Black-clad SWAT team with anti-glare visors, in bullet-proof armor, bearing automatic weapons and a battering ram, broke down the rusty, rotting door of the stable, shouting, “Hands up, everybody! Get on your knees! This is the FBI.” Their leader, Herod, made a beeline for the child and yanked him out of the manger, as four burly special agents – two apiece – handcuffed Joseph and Mary. They were half-marched, half-dragged out into the winter night where a caravan of black vans with blue lights flashing awaited the criminals.

A cursory glance at the scene of the crime would have showed a significant lack of either sheep or shepherds. The latter had long since disappeared because sheep were now raised in factory farms, where they were quickly separated from their lambs and stuffed full of growth hormones and sawdust and denied any sight of green pastures or blue skies.

The angels also failed to put in an appearance because the US military had strict orders to shoot down any UFO’s that invaded US airspace. It had been years since any angels had made it to the birth of a human baby.

And the Magi – the wise men from the East – had been apprehended at the border and found to be in violation of NAFTA and, also, of trafficking in embargoed goods – gold, frankincense and myrrh.

Under California Code 261.5 PC, Joseph, a middle-aged man was found guilty of statutory rape, having had sex with a 15-year-old girl. His protests that it was consensual drew an extended sentence from the presiding judge, who would not listen to the argument that such an arrangement was culturally sanctioned, even blessed. On hearing of the situation, the Carpenters’ Union nullified his license and confiscated his retirement monies. The FBI had broken into Joseph’s computer and found that he was in cahoots with Santa Claus, and was an accessory, before and after the fact, to Santa’s frequent “breaking and entering” escapades.

Mary was accused of child endangerment on several counts. Firstly, failing to have her child inoculated according to the schedule of the CDC, which mandated vaccines beginning on the day of birth. Secondly, she had dumped her neo-nate in a flea-infested animal manger which exposed him to all kinds of possible infections. And, thirdly, she had wrapped him in swaddling clothes which research had shown could lead to hip dysplasia and SIDS (sudden infant death syndrome.)

She was packed off to Juvenile Hall where she was tested for drug use. Under the careful eyes of matronly social workers and bespectacled psychologists, she was subjected to a battery of tests, and forced to attend daily individual and group therapy sessions. The final verdict was Bipolar II.

Jesus was rushed off to Child Protective Services where he was bottle-fed the best artificial formula milk that Big Pharma could sell, brought up to speed on his vaccines and, then, shipped around to a series of foster homes who made money as he cried himself to sleep in a warehouse filled with “rescued kids.” As a substitute for the “Agony in the Garden”, he now experienced, daily, the “Agony in the Nursery.”

The child Jesus grew up to be a troubled teenager, never finished high school nor held a job. The really bad news is that God realized Jesus could no longer be the intended redeemer. So, though he was lucky to avoid crucifixion, it meant that he didn’t die for our sins. The upshot? We’re still locked out of the Garden of Eden.

But America rested, safe in the conviction that crimes had been discovered, the guilty punished, and the innocent child saved and lovingly prepared for life in the 21st. century. 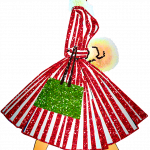 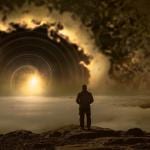 A little known fact about farting...
Spirituality Itself
Related posts from Companions on the Journey