Amelia was a saint I didn’t know existed until my goddaughter Amelia was born. It was then that we discovered that not only does she exist but that her feast day is my birthday! What a wonderful personal connection my goddaughter and I now share. I love how saints sometimes pursue us and find us instead of us finding them. Friendship with the saints really is a two-way street. It’s a great reminder that they are also people, real people. Fun fact: my goddaughter and I also share the same patron saint, St. Thérèse of Lisieux. (And yes, today is my birthday. Many happy returns to moi). 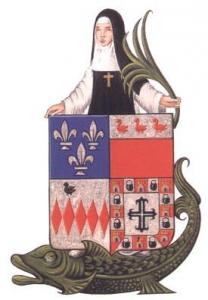 Amelia (also known as Amalberga) was a noblewoman of one of the Frankish royal houses. Because of this, she was expected to marry but she, instead, felt a call to religious life.

Legend has it that Charlemagne was in love with Amelia and pursued her for many years. She had caught the attention of his father, Pepin, for her great virtuousness and this is how Charlemagne knew her. This would’ve been a dream match! But Amelia had already begun preparing to become a Benedictine nun! Charlemagne couldn’t take no for an answer, though, and tried to forcibly make her go with him. In doing so, he broke her arm but was still unable to move her. Charlemagne fell ill because of his actions and Amelia’s arm was miraculously healed. She forgave him, after which his illness dissipated, and he gave in to her religious vocation.

In another legend, Amelia reached Temsche, where she would enter the convent, by riding across a river on the back of a fish. This is why she’s often depicted with a sturgeon at her feet.

July 11, 2020 Benedict of Nursia- July 11 (Everyday Saints Series)
Recent Comments
0 | Leave a Comment
"Nice article. It is also one of the most beautiful songs of Queen ..."
Module-t Prefabricated A Great Pretender
"Fr. Peter Grover, OMV, St. Clemens, Boston brought out in his homily today (on YT) ..."
Ravyn Guiliani Thomas the Apostle- July 3 (Everyday ..."
"It was interesting, I enjoyed it, thank youساندویچ پانل"
sandwichpanel Cinderella and St. Germaine Cousin
"GoT was "nihilistic" because it didn't pay lip service to your God? I can see ..."
Raging Bee Destruction of the Characters of Game ..."
Browse Our Archives
get the latest from
Catholic
Sign up for our newsletter
POPULAR AT PATHEOS Catholic
1