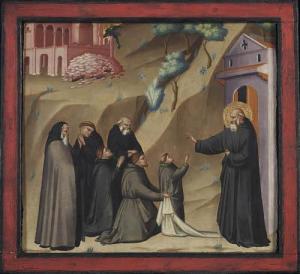 Benedict (and his famously saintly twin sister Scholastica) was born to a Roman noble around 480AD. He’s pretty famous. You may have heard of him. Father of Monasticism? Yeah, that’s this guy. Creator of the Rule of St. Benedict? Yup, also him. Since he’s pretty well-known, I won’t rehash his life. That would be boring. Instead, here are a couple of my favorite stories from his life.

One time, a poor man came to the monastery begging for a little oil. Although Benedict commanded that the oil be given, the cellarer refused the man. There was only a tiny bit of oil left, you see, and if any was given away there would be none for the monastery. Benedict became angry at this distrust in God’s providence and knelt down to pray. As he prayed a bubbling sound came from inside the oil jar. The monks watched in fascination as oil filled the vessel so completely that it overflowed, cascading out on to the floor!

One day, during his time living in a cave above a lake as a hermit, the Devil presented Benedict’s imagination with a beautiful, tempting woman. Benedict resisted by rolling his body into a thorn bush until it was covered in scrapes. Through this physical penance and mortification, he was able to heal his soul. This shows that we can discipline our bodies, wills, and souls to be pure and good. Benedict didn’t blame his temptation on the figure of the woman but on himself for seeing her in that way. He then disciplined himself to overcome this failing.

Benedict was once poisoned! Nearby monks wanted him to instruct them. He warned them that he’d be too strict for them but they asked him to come anyway. When he did and his way of life did prove too strict for them, they tried to off him. However, when Benedict blessed his drink, filled with poison unbeknownst to him, the cup shattered. Basically, don’t ask for what you can’t handle and then try to take revenge on someone for giving you exactly what you asked for.

There are so many stories of St. Benedict, but suffice it to say he was intelligent, wise, and holy. Blessed feast!

July 13, 2020 Jason- July 12 (Everyday Saints Series)
Recent Comments
0 | Leave a Comment
Browse Our Archives
get the latest from
Catholic
Sign up for our newsletter
POPULAR AT PATHEOS Catholic
1