Felix was a bit of an oddity as far as priests go– he was married! Unexpectedly, at the age of thirty-seven, he was made bishop of Nantes, France. When this happened, Felix’s wife decided to become a nun. Felix then sold his inheritance on behalf of the poor and took his position. 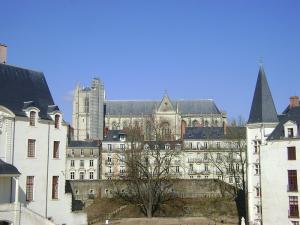 While Bishop of Nantes, he had a cathedral erected there; a project started by his predecessor. The improvements he made to the town were recorded in poems by St. Venatius Fortunatus. Felix also served as a bridge between the people of Brittany and the Frankish kings, once convincing a count to withdraw his forces and make peace.

Felix was present at the Councils of Paris and Tours in 557 and 567, respectively, and gave notes on the customs of his people.

He died in Nantes at the age of seventy, after serving as the Bishop for thirty-three years, nearly half his life.

July 8, 2020 Killian- July 8 (Everyday Saints Series)
Recent Comments
0 | Leave a Comment
Browse Our Archives
get the latest from
Catholic
Sign up for our newsletter
POPULAR AT PATHEOS Catholic
1