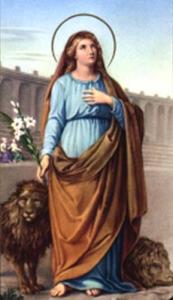 Dominica is another Christian who lived during the early days of Emperor Diocletian’s reign and persecution of Christians. She was born in Campania, Italy in 287AD and was just a girl of 13 when she was martyred. Dominica smashed pagan idols and the emperor’s men then arrested her. She was thrown to wild beasts but the beasts wouldn’t touch her! After this went on for a time, Dominica was beheaded. Though she was born in Italy, she was martyred in Nicodemia (present-day Turkey).

Reflecting on how it must have felt to be just 13 years old and arrested for smashing idols, a few things came to mind. First, of course a 13-year-old would have such audacity. Pre-pubescent and early pubescent children often display the knowledge of rights and wrongs and couple it with brazen actions. Often, though, the do not fully understand the circumstances or consequences.

Second, I wonder if she doubted whether she’d done the right thing after all. Perhaps the full weight of her actions finally bore down on her in prison. Perhaps the wild beasts not harming Dominica was more for her own sake and faith than for those who witnessed it. Maybe God was reminding her that she was His and that He would care for her in everything.

This is all speculation, as we know very little about her. But I was 13 once and did some brazenly stupid things even with good intentions and I remember how I felt.

Lastly, and this ties into the last point, her name means “belonging to the Lord”. Her story is a beautiful reminder of that, in that not even wild beasts would harm Dominica because they knew to Whom she belonged. What a wonderful thing for each of us to meditate on, that no matter what, especially no matter our doubts, we belong to the Lord and nothing can separate us from Him. Nothing. May we never forget that.

July 6, 2020
Seeing God in the Performance of Michael Jordan
Next Post

July 7, 2020 Felix of Nantes- July 7 (Everyday Saints Series)
Recent Comments
0 | Leave a Comment
Browse Our Archives
get the latest from
Catholic
Sign up for our newsletter
POPULAR AT PATHEOS Catholic
1