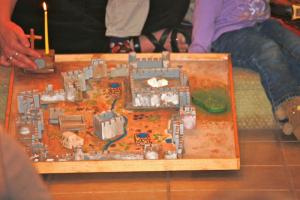 On Good Friday each year, the catechesis I offer to children (and their parents) of the parish concerns biblical geography.

We begin by looking at a small globe. First we locate where we are on the globe (in this case, Ohio), and then I turn the globe to show them a small red speck I have painted on the other side — the land of Israel, that tiny country in which the greatest gift of God to us was first given. I ask them what that gift could be? “Jesus!” they all answer. Yes, the gift of his very self. Then I show them the relief map of Israel, giving as much or as little detail as the particular group seems able to absorb: the Mediterranean Sea on the left side of the map, how hilly this country is, the Jordan River that runs down the center and where Jesus was baptized, the Sea of Galilee at the upper end of the Jordan, the Dead Sea at the bottom…and then we discuss the three great cities: first Nazareth in the north, where the Angel Gabriel announced to Mary that she would have a most special and amazing child (there is a hole in which we place a marker with a dove of the Holy Spirit, to remind us of how Mary came to be pregnant there); then in the south, the town of Bethlehem, where Jesus was born (“Today is born in this city a Savior, who is Christ the Lord”), and we place a marker with the star of Bethlehem to remind us of the sign in the sky that the Magi followed to find the new King; and finally, most precious of all the cities in the world, just a little to the north of Bethlehem…and I bring out the marker for Jerusalem, a golden cross, and hold it up for all the children to see before I ask, “What happened in Jerusalem that makes it the most holy, precious city of all?” The children see the cross and know, “Jesus died and rose from the dead there.”

Then I show them this map, a model of the city of Jerusalem in the time of Jesus. The base is made of wood, with a little bit of paper mache relief added to indicate the upper and lower cities, and the superior height of the Temple Mount. All the other parts of the city are made of wood and removable, and all are waiting on a cardboard mute map behind the model. Together, we slowly think about each element and then place it where it belongs on the city: first the walls (why would a city need walls? How precious this city is, how important to protect it!); the two pools (of Siloam, in the south, where Jesus sent the man born blind to wash the mud from his eyes; and of Bethsaida, near the temple, where the paralyzed man was waiting for an angel to disturb the surface of the water and Jesus healed him without even putting him in the water); the temple mount (so precious to Jesus, where his parents took him when he was a baby and Simeon held him and prayed to God, who keeps his promises…where he came as a boy to teach the elders…the place he called “My Father’s house); and then the cenacle, where we recall yesterday’s lesson… The cenacle is the small bi-level house in the center of this picture.

We remember together those precious words of Jesus that he said at his Last Supper. Then I trace my finger through the city, and out through the gate, to the Mount of Olives, where Jesus walked to pray that night. We speak together about how Jesus was arrested there. Then I trace my finger back to the house of Caiphas (that fortress-like building to the northeast of the cenacle), and we speak together about how Jesus was questioned by the High Priest. Again I trace my finger through the city, where Jesus walked to be questioned by Pilate, in the Tower of Antonia, just north of the Temple. Next I place Herod’s palace and show how Jesus walked from Pilate to Herod (where we dwell on the wickedness of Herod’s desire to see Jesus work a magic trick) and back again to the Tower of Antonia, where Jesus received his death sentence. The material includes a small wooden cross, and now I use it to trace the route from the Tower of Antonia to Golgotha, outside the city in the far northwest corner of the model.

There are two holes in the top of the model of the mount where Jesus was killed. The cross is erected in one, and we speak, with deep sadness, of Jesus’ death there. Then I show them a small hole in the side of the mount, to indicate Jesus’ tomb. We roll the huge stone over the opening. Then I ask, “But what happened on the third day?” The children are so happy and relieved to announce, “He rose from the dead!” I roll the stone away from the hole and tell of how the three women came with spices for Jesus’ body, but when they arrived, they saw the stone had been rolled away and the tomb was empty, and young man, dressed all in white, was sitting on the stone. He asked them, “Why do you look for the living among the dead? Jesus is risen!” Then we sing, “Jesus is risen from the dead…” (because how could one simply speak such a fact? The words cry out to be sung) I place a candle in the second hole, and light it. Then we recall those precious, new words that Jesus spoke in the cenacle, at the Last Supper, and remember that those words are still repeated today, at Mass… Jesus is with us still. He promised never to leave us, and he has kept his promise! Finally, we sing many songs together, and then I invite the children to say something to Jesus about all we have thought about together today. “Sorry;” “Thank you;” “I wish I could love like you;” “You’re better than the best!” Then we sing some more.

From Catechesis of the Good Shepherd presentations developed by Sofia Cavalletti and her collaborators at her catechetical center in Rome. 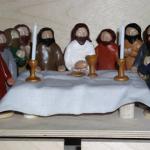 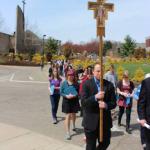 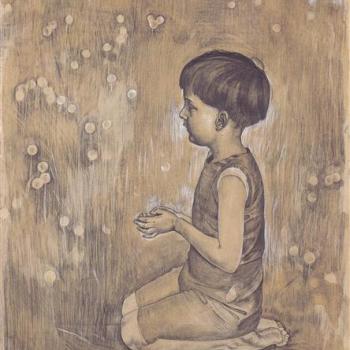 Catholic
Is there anything more urgent?
Convivium Salon