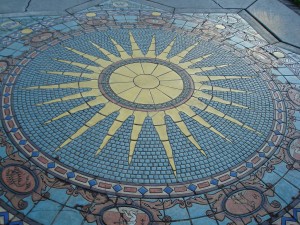 The calendar for S’Mary’s World was established by the Articles of Colonization, as was usual in the early colonial era.  Every earth-like planet has slightly different periods of rotation and revolution, and practicality dictates that local matters are scheduled according to local time. Maintaining a proper chronology is essential to colonial success, and so practicality also dictates that the calendar be established and well understood prior to landing.  In that era, prior to the discovery of wormhole gates, it was thought that times in different star systems could not be related in any meaningful way due to relativistic effects.  As a result the nature of a colonial calendar was somewhat arbitrary and frequently subject to much wrangling and in some cases to out-and-out whimsy.

The Articles of Colonization for S’Mary’s World take a characteristically pragmatic approach, avoiding novelty for the sake of novelty.  Freezer ship Our Lady of Loreto was intended for the world now known as Maria Victrix, or St. Mary’s-within-the-Arm.  Maria Victrix has an orbital period of just 341 days, which were to be divided into the conventional twelve months, each of 28 or 29 days, with leap-days added to February as necessary.  The day of landing was to be designated Sunday, December 1st, of Year of our Landing 1.  The calendar was to use standard seven-day weeks.

As an explicitly Catholic colony, the expedition planners also had to accommodate the Church’s liturgical calendar, which is based on an explicitly 365-day solar calendar, with the date of Easter based on the lunar cycle.  Taking the view that the events on the liturgical calendar commemorate events on Old Earth, the Articles of Colonization maintained the 365-day cycle for the liturgical year, though using local days rather than Old Earth days.  The liturgical calendar was thus completely unsynchronized with the secular calendar at any period longer than a week, with the feasts of the Church moving through the secular year.  Justification for this was taken from the precedent of Easter; the date of Easter is ultimately based on the Hebrew calendar in use in Christ’s day, and is in a sense an inclusion into the secular Roman calendar.  On S’Mary’s World, the entire liturgical calendar was to be a similar inclusion into the secular calendar, and all feasts were thus movable feasts.  The day of landing, December 1st, was to be taken not only as the first day of the secular year, but also, in Year of Our Landing 1, the first Sunday of Advent.

As matters transpired, the Loreto made landfall not at Maria Victrix, as planned, but at the planet now known as St. Mary’s-without-the-Arm, or S’Mary’s World.  S’Mary’s Sun is slightly larger and hotter than that of Maria Victrix, and the planet’s year is 387 local days in length, and so the carefully designed secular calendar had to be scrapped.  Some thought was given to basing S’Mary’s chronology purely on the liturgical calendar; but more practical heads overruled this notion, and a new secular calendar was designed following the Day of Landing, on December 1st of Year of Our Exile 1.  Because determining the precise orbital period took time, December and January have 28 days in the Exilic Calendar, as specified in the Articles of Colonization; the remaining ten months have 33 or 34 days each.

The Times of Exile ended with the coming of the wormhole exploration teams in 633 YOE, at which time S’Mary’s World adopted the Galactic Coordinated Universal Time (GUTC) calendar and clock for all matters involving interstellar trade and governance, and resynchronized its liturgical calendar with that of Old Earth.  For all local matters and day to day life, however, the people of S’Mary’s World continue to use the Exilic Calendar and dating.

December 26, 2013
Words I Wish I'd Written: Provision for Discourse
Next Post