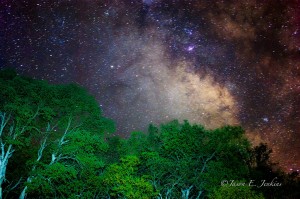 The colony world of St. Mary’s-without-the-arm, known simply as “S’Mary’s” to its inhabitants, was settled from Old Earth via the freezer ship Our Lady of Loreto in AD 2347, at the height of the Neo-Roman Ascendancy. Due to technical problems in flight, the ship missed its landfall at its intended destination (colony world Maria Victrix, also known as St. Mary’s-within-the-arm) and was long thought lost until contact was re-established by wormhole explorers in local year 633 YOE.

Fortuitously, the planet to which the Loreto‘s crippled guidance system eventually brought it was more congenial to human life than Maria Victrix proved to be, or the colonists would not long have survived. Their numbers were severely depleted by cold sleep failure during the unexpectedly prolonged voyage. Much of their technical base was destroyed by the in-flight catastrophe, and much had to be abandoned during the hurried landing.

Even with the clement environment, the tale of the colonists of S’Mary’s is one of grit, determination, faith, and a remarkable degree of ingenuity in the creation of social structures designed to preserve not only life but also culture for the long term. Accepting that a reversion to a much lower of technology was unavoidable, the first colonists took steps to preserve the colony’s library and knowledge for the long term.

As the majority of colonists were Roman Catholic, many of them tertiaries of a variety of religious orders, the form of the new society took a certain inevitable turn. As the colonists settled in for the Hard Times, the modern world of St. Mary’s-without-the-arm was born in monasticism.