Meme Watch: Their Story vs. Your Story

Meme Watch: Their Story vs. Your Story January 9, 2014 willduquette 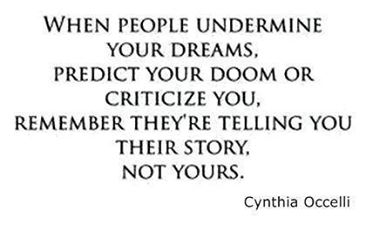 I ran across this meme on Facebook a couple of times recently, and as so often I asked myself, “Well, OK, it’s affirming; but is it true?”

I’ve written elsewhere about the ambiguity inherent in aphorisms, and the same can apply to memes. Ms. Occelli meant something by it; the people who shared it on Facebook meant something by it; but as I’ve no context from any of them, I can’t say how precisely or generally they understood it. All I can do is interpret it based on what it says. So, just to be clear: I’m not attributing any particular view to the author or those who shared it; I’m simply addressing the words themselves.

The most charitable reading is simply, “Discount negative words from others.” There’s something to that; just because someone says something negative about you, doesn’t make it true. Lying to us about ourselves is one of the devil’s primary tools; and as St. Paul said, “Test everything and retain what is good.” You shouldn’t take in negative criticism uncritically.

But this meme isn’t saying, “Test everything; retain what is good.” It’s saying that negative words from others are really about them, and not about you, and so they can be discounted on the face of it. That’s troubling; sometimes when Mom says you’re going to die if you jump off the cliff with all your friends, she is in fact right.

I’m particularly interested in the notions of “their story” versus “your story”. I remember talking with a girl I knew in college. I’d made some assertion, I don’t remember exactly what, and she said, “That’s true for you, because you believe it. But it isn’t true for me.” Now, the statement I’d made was an assertion about objective reality, about the way things are in general. Either it was objectively true or objectively false for both of us; or (possibly) partially true and partially false. The point is, its truth or falsehood didn’t depend on either of us.

It was the first time I’d run into the absurd notion that objective reality isn’t the same for everyone. I don’t know whether she meant what she said in the way Jean Paul Sartres might have: that reality is what you will it to be. (I’ve read just enough about Sartres to understand that there’s no point in arguing with him; the truth is what he says it is at the moment.) Or perhaps she wasn’t speaking of objective reality at all; perhaps she was speaking of the narratives we tell ourselves that help us to cope, stories that are valuable because useful, whose truth or falsehood is irrelevant.

Now, one of the things I do for a living is mathematical modeling; and it’s a common quip in that field that all models are false, but some are useful. However, they are only useful insofar as the approximate reality in some useful way. Einstein proved Newton wrong; but Newtonian physics is still useful and still taught because under many conditions it gives answers that are close enough. You don’t need to take relativistic effects into account when computing the forces in a skyscraper or a bridge.

Another kind of story that’s false but useful is the fable—Androcles never actually removed a thorn from the paw of a talking lion. But again, the fable is useful because it isn’t wholly false. The events never happened, but the moral remains true.

Even with useful stories, the question of truth or falsehood is never irrelevant; the model has to be true in some way, or in some degree, or it’s simply a pernicious lie. (And depending on what it is and the circumstances, it might be a pernicious lie even if it’s mostly true. A lie by omission might be wholly true in what is said, but also wholly misleading.) The problem I see with this meme is that it invites the reader to build his own reality independent of the objective truth; and long term, that’s a failing strategy.

January 10, 2014 One Piece at a Time
Recent Comments
0 | Leave a Comment
"You should update your bookshelf page accordingly."
3vil5triker . In which the Blogger is Very ..."
"You need to change the "KS" photo. It's of KANSAS CITY, MISSOURI. It is not ..."
Nessy Meme Watch: Economic Bullsh*t
"This has been on my wish list for a while. Sounds like I need to ..."
Rebecca Fuentes The Apostasy That Wasn’t
"Is not the “splendor of heaven” the presence of God in all His glory, of ..."
jayne_wayne Splendor Fatigue
Browse Our Archives
get the latest from
Catholic
Sign up for our newsletter
POPULAR AT PATHEOS Catholic
1