The False Religion of Tomanāk 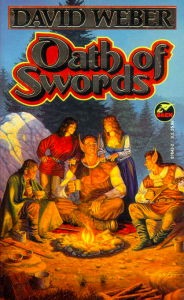 I’m always fascinated by the presentation of religion in fantasy and science fiction novels. Most such are fairly absurd, like the common combination of polytheism with Catholic trappings, absent any forces that make those trappings make sense. The author needed a bit of religion and cobbled something together from spare parts. David Weber’s “Church of Humanity Unchained” from the Honor Harrington series is another example of not taking very great care: in early books we are assured that the Church, centered on the planet of Grayson, threw out the New Testament and then gave the Old Testament its own spin—yet later we find the Graysons celebrating Christmas and going to confession.

Occasionally, though, you’ll find a book or series where an invented religion plays a big role, and where the author has really tried to make it all make sense. The best example of this I know is found in Lois McMaster Bujold’s Chalion

series (which is well worth your time); in that world, which bears a more than passing resemblance to Spain on the eve of the Reconquista, we find a fully-fledged religion that actually makes sense in context. In Bujold’s world the gods are immensely powerful…but only in the spiritual realm. In the physical realm they are powerless, except when they can work through human beings. It’s a theology far removed from that of Christian orthodoxy, but in context it works both as literature and as a social and intellectual construct.

David Weber has attempted something similar in his tales of Bahzell Bahnakhson, also known as the “War God” series after the war god Tomanāk. (Capsule review: the first two novels of the series, Oath of Swords

and The War God’s Own

, are light-hearted somewhat picaresque tales of how good-hearted barbarian Bahzell Bahnakhson comes to be a Champion of Tomanāk, the god of war and justice, which choice on the god’s part scandalizes all of the right people. The next two novels in the series, Wind Rider’s Oath

are much longer, much less light-hearted, and filled with Weber’s trademark bad guys discussing their nefarious schemes ad infinitum, which makes them a bit tedious. Personally, I’ve begun to skip most of those scenes, which makes the books much more worth reading.)

But I’m wanting to talk about the theology of these books, what in the past I’ve referred to as the books’ theosphere.

The story, as we have it from the lips of Tomanāk himself (Tomanāk is a major character, not merely an absent deity) is this. Orr All-Father is the creator of the universe and the father (or grandfather) of all of the gods. Phrobus, Orr’s seventh son, rebelled, leading to a war between the Gods of Darkness (Phrobus and his get) and the Gods of Light (all the rest); and the result of that rebellion was the material world in which we humans live. The material universe is conceived in terms of the “Many Worlds” hypothesis: there is not one universe but many, with new ones coming into being at each decision point.

Now, here’s the gimmick. The gods cannot manifest in power in a material universe without possibly destroying that universe; and what effect that would have on the remainder none of them know. (So much for omniscience.) Thus, they must work through the human beings in each universe, and try to sway things toward the light or toward the dark, until either the Gods of Light or the Gods of Darkness are wholly banished from that universe. Thus, we have the Champions of Tomanāk openly leading men of good will to fight against the bad guys, who are generally being manipulated in secret by the servants of one or another of the Dark Gods. It’s a kind of divine Cold War: the great powers cannot contest directly, so they do so through puppets in smaller states; and the great powers are trying to take over the multiverse one time line at a time.

I find it interesting that both Bujold and Weber devised theologies that put a premium on human action and minimize divine intervention; but I suppose I shouldn’t be. After all, that’s the one thing in either theology that’s real: God really does prefer to work through men and women most of the time. Pace Bujold, God certainly can intervene when He chooses, as witness the Incarnation and countless small miracles; and Pace Weber, the Almighty has no equals or even near equals. But the Lord’s insistence on respecting our human dignity as rational creatures possessing both intellect and free will means that He will not override our wills; and so He draws us to Himself through our fellow men and women.

This is not to say that the book’s moral world view is entirely consistent with Catholicism. As usual, Weber pays tribute to most of 21st Century America’s sexual shibboleths; and there’s a recurring strain of consequentialism in Bahzell’s discussions with Tomanāk: Tomanāk wants Bahzell to do everything according to the rules (He is, after all, the god of justice), and Bahzell insists on bending them in the name of efficiency and pragmatism. (And, of course, Orr All-Father cannot be the First Cause of classic theism.)

Nevertheless, it’s refreshing to find a religion in fantasy fiction that’s neither vacuous nor presented as morally corrupt.

January 19, 2015
Today's Aquinas: There's Nothing Accidental about God
Next Post

January 21, 2015 Review: Kindle Voyage
Recent Comments
0 | Leave a Comment
"You should update your bookshelf page accordingly."
3vil5triker . In which the Blogger is Very ..."
"You need to change the "KS" photo. It's of KANSAS CITY, MISSOURI. It is not ..."
Nessy Meme Watch: Economic Bullsh*t
"This has been on my wish list for a while. Sounds like I need to ..."
Rebecca Fuentes The Apostasy That Wasn’t
"Is not the “splendor of heaven” the presence of God in all His glory, of ..."
jayne_wayne Splendor Fatigue
Browse Our Archives
get the latest from
Catholic
Sign up for our newsletter
POPULAR AT PATHEOS Catholic
1

Catholic
The Glory of God and the Total Perspective...
Cry 'Woof'
TRENDING AT PATHEOS Catholic

White Privilege and Hypocrisy on Display in Catholic...
And what is happening now has happened before. It has happened here....
view all Catholic blogs
What Are Your Thoughts?leave a comment
Copyright 2008-2020, Patheos. All rights reserved.