The Daughter of Time, by Josephine Tey

The Daughter of Time, by Josephine Tey June 23, 2015 willduquette 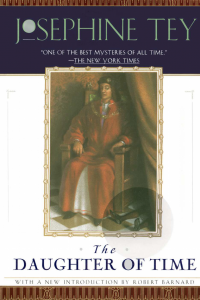 Following a nudge by Tom McDonald I’ve just re-read Josephine Tey’s The Daughter of Time, which is perhaps the most unusual whodunnit I’ve ever read.  Tey was an English mystery writer of the Golden Age of British mysteries, a contemporary of Agatha Christie and Ngaio Marsh; she also wrote plays under the name of Gordon Daviot.  And that’s almost all that anyone actually knows about her…except that she didn’t write to a formula.  Each of her mysteries is distinct in tone and structure from the others; she clearly wasn’t afraid to experiment.

The Daughter of Time is her riskiest endeavor; in this book, once voted the best mystery novel of all time, her sleuth, Scotland Yard detective Alan Grant, spends almost the entire book flat on his back in the hospital.  Nor is he directing a criminal investigation from his hospital bed, like a less rotund Nero Wolfe—at least, not precisely.

He’s in bed, and he’s bored; he has nothing to do but stare at the ceiling (which he has memorized).  He can’t even watch daytime TV, because there was no daytime TV to watch.  He’s got novels by fashionable authors to read: a romance and a novel of the sort Stella Gibbons lampooned in Cold Comfort Farm:

The Sweat and the Furrow was Silas Weekley being earthly and spade-conscious all over seven hundred pages. The situation, to judge from the first paragraph, had not materially changed since Silas’s last book: mother lying-in with her eleventh upstairs, father laid-out after his ninth downstairs, eldest son lying to the Government in the cow-shed, eldest daughter lying with her lover in the hayloft, everyone else lying low in the barn. The rain dripped from the thatch, and the manure steamed in the midden. Silas never omitted the manure. It was not Silas’s fault that its steam provided the only uprising element in the picture. If Silas could have discovered a brand of steam that steamed downwards, Silas would have introduced it.

He doesn’t want to read tripe; he wants a problem to think about.

A friend who understands him quite well suggests he investigate some historical mystery; and to jumpstart it brings him a portfolio of portraits of famous maybe-murders from past decades and centuries (it seems that Grant has a knack for reading faces).  He gets stuck on one in particular:

It was the portrait of a man. A man dressed in the velvet cap and slashed doublet of the late fifteenth century. A man about thirty-five or thirty-six years old, lean and clean-shaven. He wore a rich jewelled collar, and was in the act of putting a ring on the little finger of his right hand. But he was not looking at the ring. He was looking off into space.

A judge? A soldier? A prince? Someone used to great responsibility, and responsible in his authority. Someone too conscientious. A worrier; perhaps a perfectionist. A man at ease in a large design, but anxious over details. A candidate for gastric ulcer. Someone, too, who had suffered ill-health as a child. He had that incommunicable, that indescribable look that childhood suffering leaves behind it, less positive than the look on a cripple’s face, but as inescapable . This the artist had both understood and translated into terms of paint. The slight fullness of the lower eyelid, like a child that has slept too heavily; the texture of the skin; the old-man look in a young face.

When he turns the portrait it over to read the caption he’s utterly shocked: this noble, conscientious prince is King Richard III.

We here in America have no visceral connection with Richard III; but he’s one of the prime bogiemen of English history.  In Tey’s day, at least, every child grew up knowing about evil Richard III, twisted and hunchbacked, a monster who murdered his older-brother’s sons to take the English throne but was defeated by Henry VII, the first Tudor king.  It was simply unquestioned.  But the portrait, a contemporary likeness, doesn’t match the reputation—not in Grant’s view.  He wants to know more.

He starts with some school books lent him by one of his nurses, and ends up being helped by an unlikely Archie Goodwin, a young American researcher named Brent Carradine.  Within a couple of weeks he’s baffled: judging from truly contemporary sources, the “account books rather than the accounts”, not only is there an insufficient case against Richard to take to court, there’s no case at all.  So who killed the princes?

One of the leading concepts in the book is the notion of “Tonypandy”.  It seems that there was a strike and riot in the town of Tonypandy in South Wales in 1910.  The legend has it that Winston Churchill, then the Home Secretary, sent in military troops who shot down the rioters.  “Everyone” knew that that’s what happened, and it was repeatedly endlessly by everyone; but in fact, apparently, it didn’t happen.  The troops were held in reserve, and the riot was put down by unarmed policemen.  The rest was propaganda, put forth by the strikers to gain sympathy with the public.  In other words, it’s another instance of “the Big Lie”.

In Grant’s view (and, I imagine, in Tey’s) Richard’s reputation is an example of Tonypandy at its finest.  Every schoolchild in Tey’s day learned about Evil King Richard who murdered the young princes; and yet all of the evidence dates from the reign of his successor.  Tey builds the case quite well, and I find it rather convincing.

It’s an interesting story, well told, and I enjoyed it as much this time as I did the first time.  Highly recommended. 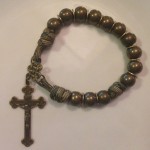 June 24, 2015 My New Friend: A Rugged Rosary
Recent Comments
0 | Leave a Comment
Browse Our Archives
get the latest from
Catholic
Sign up for our newsletter
POPULAR AT PATHEOS Catholic
1 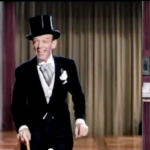