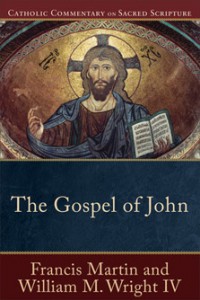 I recently received a review copy of The Gospel of John, by Francis Martin and William M. Wright IV, from the series Catholic Commentary on Sacred Scripture, and I’ve been perusing it.  I’m not accepting review copies very often these days, because I found most of the ones I’ve received tend to languish unread, which isn’t fair to the publisher; but I’d heard good things about this series, and I love the Gospel of John, so I said, “OK, why not.”

And so far, I’m impressed; it looks like exactly the sort of thing I would want.

First, the approach is deeply Catholic, in line with Dei Verbum and Pope Benedict’s words in Verbum Domini and other works.  From the Editor’s Preface:

These volumes seek to offer scholarship illumined by faith, in the conviction that the ultimate aim of biblical interpretation is to discover what God has revealed and is still speaking through the sacred text.  Central to our approach are the principles taught by Vatican II: first, the use of historical and literary methods to discern what the authors intended to express; second, prayerful theological reflection to understand the sacred text “in accord with the same Spirit by whom it was written”—that is, in light of the content and unity of the whole Scripture, the living tradition of the Church, and the analogy of faith.

In short, it’s intended to build up faith in the Catholic reader, not tear it down or deconstruct it.

One of my touchstones is the authorship question, and I turned eagerly to the book’s introduction to see how they would handle it; and again I was pleased.

Authorship by John the Apostle is now disputed, for a variety of reasons, with opinions ranging from authorship by John’s immediate disciples to authorship by an unnamed disciple who was not an apostle at all.  The text gently notes that modern scholarship doesn’t give much weight in these matters to second century authorities (which is laughable, honestly, given how scanty the commonly accepted historical record is in many places outside of biblical scholarship), but does highlight some of their arguments, notably that the Gospel of John shows signs of having been assembled by multiple hands.  This part of the introduction ends with the acknowledgement that the waters are murky but suggests that it’s not unreasonable to believe that the Beloved Disciple is John the Apostle and that John’s Gospel was assembled and put into its final form by John’s disciples.  In short, the discussion ends on a note that honors ancient tradition while accepting that sausage-making is messy.  More I cannot ask.

So I like the approach it takes; what about the content?  I am not a scripture scholar, but I know my way around the New Testament.  Is there enough new here to warrant my spending time with this particular volume?*  And does it lend itself to reflection and meditation?

I can hardly pretend to give a comprehensive answer after a quick once-over and a few spot checks, but the answer certainly seems to be yes on both counts.  As an example of something I’d not heard before, the Introduction suggests that the Gospel of John shouldn’t be considered a history, an account of everything important that happened; rather, it’s a “Life” (bios in Greek), in the same genre as Plutarch’s Lives.  Plutarch’s goal wasn’t to tell everything about the man whose life he was writing, but to bring out the man’s character specifically as an aid to moral formation.  John himself tells us that this is his goal in writing his gospel, but it hadn’t occurred to me to relate the two.  This matters, because while I’ve heard a lot of talk about how the gospels aren’t history, per se, I’ve heard very little of interest as to what they really are.

In addition to the text of the gospel (NABRE, unsurprisingly) and the direct commentary (which is voluminous) there are also numerous sidebars on the historical setting and on post-biblical tradition, and all of the usual cross-references (which I’m usually too lazy to follow).

In short, I like what I’ve seen; and I plan to spend more time with the volume over the coming weeks and months.

* I am not a scripture scholar.  The answer is going to be “Yes”. 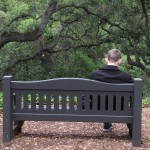 May 27, 2015 How the Mind Ascends to God
Recent Comments
0 | Leave a Comment
"You should update your bookshelf page accordingly."
3vil5triker . In which the Blogger is Very ..."
"You need to change the "KS" photo. It's of KANSAS CITY, MISSOURI. It is not ..."
Nessy Meme Watch: Economic Bullsh*t
"This has been on my wish list for a while. Sounds like I need to ..."
Rebecca Fuentes The Apostasy That Wasn’t
"Is not the “splendor of heaven” the presence of God in all His glory, of ..."
jayne_wayne Splendor Fatigue
Browse Our Archives
Follow Us!