The Comfort of a Colonoscopy

The Comfort of a Colonoscopy May 30, 2012 Daniel Harrell 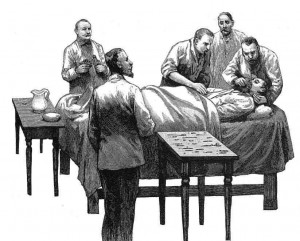 Among the most emailed articles in the New York Times this week is about colonoscopies. Apparently, people underwent the procedure thinking they were covered, only to wake up to huge anesthesiology bills that their insurance wouldn’t pay. It turned out that their gastroenterologists chose to use general anesthesia (and anesthesiologists) when a more moderate sedation would have sufficed. Talk about getting (insert associated verb here).

Having had my own 50-year recommended intestinal probe, I can only say I was glad for the unconsciousness (which my insurance did cover). Being awake for that procedure was not something I would have relished. Moreover, the Propofol they used to knock me out is some good stuff. I can see understand why Michael Jackson, sadly, was so addicted to it. Anesthesiologists refer to Propofol as the “milk of amnesia” for the way it looks but also for the way it works. Having never had anesthesia before, I was amazed not only with how quickly and effortlessly I went out, but also with how completely oblivious I was once I woke up. It was as if the whole thing never happened. It wasn’t like I slept through it. It was more like I ceased to exist.

The first thing I thought once I came to my senses? “If this is what death is like, it’s not so bad.”

Even though I’m a Christian minister who teaches and preaches with conviction about Jesus and his resurrection and about the promise of our own rising, and desperately hope and believe that it’s all true, dying can still scare me to death. I don’t think I’m alone in this fear. There was supposedly a day when Christians were known for dying well, but that was probably before modern medicine when you had little other choice. These days, like everyone else, we Christians put a lot of our faith and energy into not dying at all. We’re seemingly not as convinced as we should be that Jesus really prepared a better place for us.

It could be I’ve read too much Kierkegaard. It could be that I’ve turned 50 and entering the latter third of life. It could be that I’ve spent to much time in hospitals beside the beds of dying people. I’d prefer to be like the apostle Paul and be able to say that to die is gain. But I have doubts. Unlike Paul (and that four-year-old Nebraska boy), I’ve yet to have a preview of heaven to know it’s for real. If heaven’s not for real (and I’ve yet to read that book), what really happens to me after I die?

If the skeptics are right, when I die I’m just dead. I simply cease to exist. No brain means no brain function, no awareness, no anything. I got a taste of that with my colonoscopy. The preparation for the procedure was gruesome, just like life sometimes. But the colonoscopy itself, as gruesome as that could have been, was not bad at all. If death is no worse than a colonoscopy, then maybe I have nothing to fear. I can handle nonexistence. And if I can handle nonexistence, resurrection is only up from there.

May 31, 2012 Seminary Grads: Christianity Doesn't Need You. The (Local) Church Does
Recent Comments
0 | Leave a Comment
"What do you folks think of this one?-- Quoted from News4JAX -- 11/25/16 --"JACKSONVILLE, Fla. ..."
y3shuA imMANu3l Divine Intervention vs Divine Involvement
"So Melville traveled to Jerusalem in an effort to recover his Christian faith...hmmm, interesting, but ..."
Gregg Thomas Melville’s Epilogue
"I fail to see how Holbein's work 'deprives the Christian of hope' any more than ..."
Joseph The Dark Light of Thomas Kinkade
"You’ve written nice post, I am gonna bookmark this page, thanks for info. I actually ..."
Marc Barber The Dark Light of Thomas Kinkade
Browse Our Archives
get the latest from
Evangelical
Sign up for our newsletter
POPULAR AT PATHEOS Evangelical
1