An Advent Meditation with Gabriel Orozco 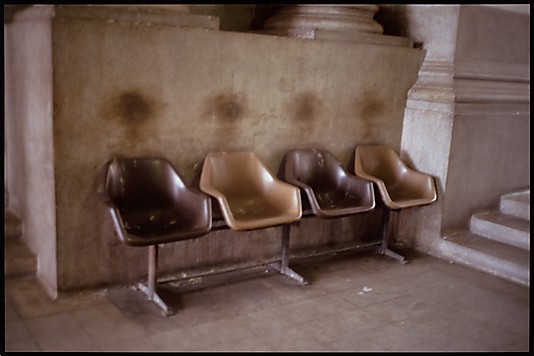 In my day job as curator of LIBERATE, the online resource ministry of Tullian Tchividjian and Coral Ridge Presbyterian Church, I was searching for a suitable image to pair with a sermon by one of our contributors, Rev. Nick Lannon, on the Advent theme of waiting. And I happened upon a photograph by contemporary artist Gabriel Orozco which I had often used to introduce his work to my undergraduate students. Now it strikes me as one of the more poignant and evocative artistic embodiments of Advent, and deserving of an Advent art critical meditation, if there exists such a thing.

Gabriel Orozco (b. 1962) is a photographer, sculptor, and conceptual artist from Mexico City who now also lives and works in New York and Paris. His work has been profoundly influential in the contemporary art world throughout the 1990s and the first decade of the twenty-first century, having been honored with large-scale exhibitions at both the Museum of Modern Art, New York and the Tate Modern in London. His is interested in capturing, preserving, collecting, and re-presenting everyday objects, observations, and experiences that are everywhere present but nowhere seen by the vast majority of us as we rush about our daily lives. He has been called a “post-studio” artist, which means that he is not sequestered in a private working area, but out in the world, in the nooks and crannies of urban life, searching for the profound among the debris of everyday life, whether it is a photograph that captures the beauty of rain water captured in a deflated and abandoned soccer ball or an empty shoebox. The world is quite literally his studio. And his work breathes with the playful poetry amidst the difficulty and weight of everyday life. It has also been criticized for not being artistic enough, for not displaying conventional artistic talent—for being too easy.

Waiting Chairs (1998) is a photograph of a row of plastic chairs taken by Orozco on a trip to India. Although the juxtaposition of these plastic chairs and the grand stone architectural structure is itself striking, what has captured Orozco’s attention is the vestiges of human presence, the grease-and dirt-stained heads that have leaned back on the stone wall. The human presence is affirmed through absence, ghostly vestiges of repeated human use.

The photograph asks us to consider the thousands of men, women, and children who have sat in these chairs and out of frustration, exhaustion, reflection, or boredom, leaned their heads back on that wall as they waited. Waited for what? For whom? Where are they going? Where have they been?

The difficulties of navigating daily life leave us chronically exhausted. Yet we respond by running faster and paddling harder, for we are defined and justified by what we do, by what we make. Yet Orozco’s art, which is “barely art,” because he seems not to have done anything but notice things, pick them up or press a camera shudder, reminds us that waiting is a necessary part but excruciatingly difficult part of our humanity. In fact, looking at a work of art is itself a certain kind of waiting, a kind of not-doing, a kind of passive attentiveness. Research at the  J. Paul Getty Museum has determined that the average amount of time a viewer spends with a work of art is thirty seconds. An artist may work for years on a painting that we pass by in thirty seconds. A work of art beckons us to wait. But we usually refuse.

Walker Pearcy once described humanity as “waiting for news.” Yet it seems that we concoct ways to deny this reality. At this time of year, as our lives become even more busy, more stressful, and as we squeeze more into our days, let us remember that we were made to wait, wait on the Lord and it is in him that we live and breathe and having our being. This is why Advent exists. The church in her wisdom makes us stop, teaches us to be passive as we wait for the Lord, the Lord who kills and makes alive, born to die so that we might live.

December 21, 2012
"Holy Innocents" and the Birth of Jesus
Next Post