“Holy Innocents” and the Birth of Jesus

“Holy Innocents” and the Birth of Jesus December 21, 2012 Kyle Roberts

Jesus was born into a world of violence. A world where demented people kill innocent children.

It’s right there in the infancy narrative of the first gospel (in the order in your Bibles). It’s easy to miss, because we don’t often focus on it in our telling of the Christmas story–understandably so.

Matthew 2:16-18 tells the story of the “massacre of the innocents.” When Herod learns that a presumed threat to his throne was born in Bethlehem, he orders all male infants under age 2 in Bethlehem and surrounding area to be killed. An angel warns Joseph, who subsequently removes the baby Jesus from danger.

Tony Jones and James McGrath recently had an interesting back and forth as to the historicity of this account, and what that means for how we might understand suffering and God’s will. McGrath pointed outthat the only

evidence of this particular tragic event occurring is Matthew’s account itself (nothing in the other gospels–canonical or non–or in early histories like Josephus’). There is significant debate as to whether the account tells about a historical event or whether Matthew created or borrowed a fictional story. In any case, the story connected Jesus’s story with Moses’ (remember Miriam basket?) and underscored the significance of Jesus of Nazareth and his Messianic identity. McGrath takes the account as mythological–and is relieved by that. If it actually happened, it would suggest that God only cares about his own family (he sent an angel to warn Joseph, but not those other families — Weren’t there enough angels to go around?)

Tony Jones, on the other hand, insists that the story is historical and suggests that to consider otherwise is to silence the cries of the victims.

It’s easy to sense the heart behind both positions. On McGrath’s side is a concern that we not see divine providence behind every tragedy. Surely God’s will is not that little, innocent children die. Can we really believe that God takes sides? And even if we were to interpret Scripture this way,  we dare not apply that logic to contemporary, tragic events.

On the other hand, I get where Jones is coming from. While we can’t prove the event is historical, we certainly can’t be certain that it didn’t happen. So why risk silencing the voices of the victims and burying their faces under the genre of mythology?

For my part, I accept the story’s basic historicity (it’s certainly not out of character for Herod to do such a thing–indeed, he slaughtered his own sons, if we believe Josephus). But the really important element, for our purposes, is the theological message.

There’s an important lesson Matthew is telling through this story.

In his contribution to the Global Bible Commentary, Alejandro Duarte reads the gospel of Matthew through the lens of the second chapter, and the massacre of the innocents in particular. He suggests that Matthew is contrasting the kingship of Jesus with the kingship of Herod. Duarte recognizes the disjunction, the “divine injustice” that “Jesus was saved while the other children in Bethlehem were not…” This seems in contrast with the purpose of the mission of Jesus, which is to “save his people from their sins.” Salvation, Duarte insists, includes the “harm that awaits them in their daily lives.” 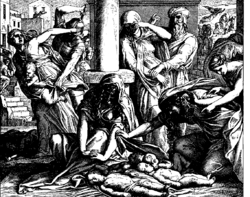 The disjunction, the tension is certainly there in the text (why was the Savior’s birth seemingly interlaced with the death of other children?). Why isn’t Matthew as troubled as we are by the implication that God somehow orchestrated this tragic scenario? Why didn’t God simply strike Herod dead–or keep the news from him? Why not save the others? Duarte suggests that the tension is due to the greater point Matthew is making: we have on display, here two kinds of royalty, two kinds of king.

Herod is a fearful and ferocious king–fearful of losing his power and ferocious toward his enemies. He makes use of his strength to wield his weapon of war and to vanquish those who threaten him. Herod’s power is the power of empire, the power of brute strength. Herod is a bully king. And Jesus? Jesus is the opposite: a baby, born to a poor illegitimate family, “dependent and passive.” While he is recognized as a unique figure, he is “weak and vulnerable,” dependent on God. The power of Jesus is exemplified by his birth as a vulnerable baby in a dingy manger. The tension from the beginning of Jesus’ incarnate life–as the birth of the Messiah occurs in the midst of the death of innocent, little ones–follows all the way through to Jesus’ act of sacrifice on the cross, in which he shows his solidarity with the powerless and ends the power of the powerful. Evil and suffering meet their end at the cross (even if the end-game must still be played out).

Jesus shows us that the death of innocent children is not God’s will–and he prayed that God’s will would be done on earth as it is in heaven. The ultimate disjunction we live with is that God’s will is too often not done on earth as it is in heaven. God does not force his way. God creates space for freedom–even for evil and tragic suffering. And he urges obedience to the call of justice. While we pray that prayer, and hope in the advent of Jesus, we must also rise up and do whatever lies in our power to right wrongs and protect the innocent. But we must follow the model of Jesus the baby and the crucified one. He was a different sort of King than Herod. And we must not lose hope that the  birth of Jesus means the eventual death of the kind of power that too often rules our world. 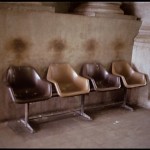 December 24, 2012 An Advent Meditation with Gabriel Orozco
Recent Comments
0 | Leave a Comment
Browse Our Archives
get the latest from
Evangelical
Sign up for our newsletter
POPULAR AT PATHEOS Evangelical
1