On Justifying Racism from the Book of Abraham, plus Some Thoughts on the Constitution

A new article has appeared on the website of the Interpreter Foundation:

This post is a summary of the article ““Being of that Lineage”: Generational Curses and Inheritance in the Book of Abraham,” written by John S. Thompson, in Volume 54 of Interpreter: A Journal of Latter-day Saint Faith and Scholarship. An introduction to the “Interpreting Interpreter” series is available at https://interpreterfoundation.org/interpreting-interpreter-on-abstracting-thought/.

The Takeaway:  Thompson argues that historical justifications of the priesthood ban that rely on passages in the Book of Abraham are based on modern assumptions rather than being present in the text itself. Those passages instead appear to align with an ancient understanding of legal inheritance (both by lineage and by covenant), as well as the natural consequences of failing to keep covenants. Thompson suggests that modern conceptions of race are not relevant to Abraham’s understanding of the priesthood, and emphasizes that a lost inheritance can be restored through the Atonement and through temple ordinances.

Some of you will recall that I’ve sworn off electoral politics here for the past several years, after having learned that at least two potentially substantial donors to the completely apolitical Interpreter Foundation had decided not to contribute to the Foundation because of my personal political views, as they had been expressed here.  I’m not (alas!) backing away from my vow to eschew electoral politics on this blog.  But the topic immediately below is, in my judgment, not a partisan matter — and it is too important to ignore:

“When Trump Promises to Be a Tyrant, Take Him at His Word”

“So, with the revelation of MASSIVE & WIDESPREAD FRAUD & DECEPTION in working closely with Big Tech Companies, the DNC, & the Democrat Party, do you throw the Presidential Election Results of 2020 OUT and declare the RIGHTFUL WINNER, or do you have a NEW ELECTION?  A Massive Fraud of this type and magnitude allows for the termination of all rules, regulations, and articles, even those found in the Constitution,” he wrote. “Our great ‘Founders’ did not want, and would not condone, False & Fraudulent Elections!”  (Mr. Donald J. Trump, 3 December 2022)

In response, here’s a deservedly famous passage from Robert Bolt’s classic play A Man for All Seasons:

WILLIAM ROPER:  So now you’d give the Devil benefit of law!
THOMAS MORE:  Yes.  What would you do?  Cut a great road through the law to get after the Devil?
ROPER:  I’d cut down every law in England to do that!
MORE:  Oh?  And when the last law was down, and the Devil turned round on you — where would you hide, Roper, the laws all being flat?  This country’s planted thick with laws from coast to coast — man’s laws, not God’s — and if you cut them down — and you’re just the man to do it — d’you really think you could stand upright in the winds that would blow then?  Yes, I’d give the Devil the benefit of the law, for my own safety’s sake.

I follow it up with a passage from an even greater Author:

And again I say unto you, those who have been scattered by their enemies, it is my will that they should continue to importune for redress, and redemption, by the hands of those who are placed as rulers and are in authority over you—according to the laws and constitution of the people, which I have suffered to be established, and should be maintained for the rights and protection of all flesh, according to just and holy principles; that every man may act in doctrine and principle pertaining to futurity, according to the moral agency which I have given unto him, that every man may be accountable for his own sins in the day of judgment.  Therefore, it is not right that any man should be in bondage one to another.  And for this purpose have I established the Constitution of this land, by the hands of wise men whom I raised up unto this very purpose, and redeemed the land by the shedding of blood.  (Doctrine and Covenants 101:76-80)

And now I turn to a distinct issue that, to my mind, even more clearly transcends partisan electoral politics:

“The Supreme Court is hearing a case on LGBTQ rights and religion (again). Here’s what you need to know: Web designer Lorie Smith argues that a Colorado’s anti-discrimination law tramples her free speech rights”

I’m happy that the Church of Jesus Christ of Latter-day Saints has filed an Amicus brief in this case, and it once again seems appropriate to me to quote a famous passage from the German Lutheran pastor and theologian Martin Niemöller (1892-1984).  Pastor Niemöller was a prisoner between 1937 and 1945 at the Sachsenhausen and Dachau concentration camps.  In this passage, he is talking about the cowardice of German intellectuals following the Nazis’ rise to power and the subsequent purging of the Nazis’ chosen targets, one by one, group after group.

First they came for the Socialists, and I did not speak out—
Because I was not a Socialist.

Then they came for the Jews, and I did not speak out—
Because I was not a Jew.

Religious liberty is a bedrock principle for me, as indeed it ought to be for anybody who affirms the Constitution of the United States of America and the first element of the First Amendment to that Constitution, which is the first part of the Bill of Rights.

And, if I see religious freedom seriously threatened — whether the threat be aimed at my own faith or at Muslims or at anybody else — trust me: I’ll be out on the barricades.  (For an Amicus brief in a Supreme Court case connected with religious liberty that I did sign, please see here.) 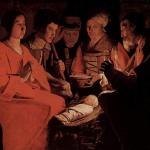