Dropping the Crystal Ball with A Little Grace, or How to Do Spirituality When Religion Is Too Much

I am a devotional polytheist, among other things. I am not an initiate in any particular tradition but have developed and maintained my own religious practice over the years. I incorporate some African-American Folk Tradition, African Traditional Religion (ATR), Hellenic, Germanic, and Roman religious practices into my work with the gods, ancestors, and spirits. That often means that I am juggling multiple religious practices, ritual forms, festival and offering days, and the like. I am not complaining. I love it! However, my love of it does not keep me from being realistic about the demands of my practice. I am a graduate student in the social sciences, currently on internship, so life can get incredibly hectic. In addition to university I have friends and family to whom I have obligations. At times, both internally and externally I can become taxed to the max. In those not so magical moments my religious practice can falter. When that happens, I go back to basics for a time. That means that I remember the difference between religion and spirituality, and I find that I chose spirituality over religion pretty much every time.

Spirituality is about connections, about the links among human beings as well as those bonds that interweave our lives with the land, the gods, the spirits, our ancestors, plants, animals, oceans, mountains, the sky, and everything in between. Where religion is about specific practices, related ritual forms, and the structured beliefs that give rise to all of that, spirituality is about exactly why we engage in the activities of religion. Religion says make offerings of fancy incense or what have you to a particular deity on a particular day. Spirituality says do it in order to connect with that being and reaffirm the bonds between you. In my life, as I experience daily short-term struggles with as well as longer-term changes in geography, family relationships, friendships, romance, self-image, personal aspirations, professional prospects, and all of the rest, my adherence to religious practice sometimes suffers.

I don’t know about you, but in times of major life change and/or crisis I have been known to drop the crystal ball completely. Sometimes the fancy incense does not get burned. Sometimes the elegant deity statues do not get anointed with fine oil. Under those circumstances, when we may not have the internal and/or external resources to do religion, how do we stay true to spirituality? How do we stay connected with the gods and other important divine powers in our lives? Here are a few ways that I’ve learned to be the kind of devotee that I want to be to the gods, ancestors, and spirits, even when my “fancy” religious practice ebbs for a (hopefully short) period of time.

Pray. Call out to your gods by name and speak words of thanks. Express gratitude for what the relationship with them has meant to you. Also, consider being vulnerable with them about your doubts and fears, your hopes and dreams. In difficult times, it helps me to know that Hekate hears me as she heard Persephone when she was stolen away by Haides. When things get tough, or just confusing, Hekate walks the path before me carrying her twin torches for she is Propolos, the Attendant Who Leads me into and out of the underworld.

Sing. I know dozens of Pagan chants and songs, some of which I have written myself, and others I’ve obtained from the internet or learned at festivals. The music that passes my lips is one of the simplest and best things that I share with the gods. Mercurius, Dionysos, and Odin especially appreciate a good song when my heart is willing but other more religious resources are not falling into line.

Open. The gods are everywhere. Their presence can be seen in a blade of grass reaching for the sun (Freyr), or in a mother at the bus stop holding her child close (Nerthus), or in a new play you went to see at your local theater company (Dionysos). In those moments, let the gods in. Open to them and whisper a word or two of praise. They are with you, and you are with them.

Commune. Depending on the deity, pour a glass of water, milk, or juice or even brew some tea, and then bless the beverage in the name of one of your gods. Ask them to imbue it with a portion of their energy so that you can draw closer to them, and then partake. This is one of my favorite ways to honor the gods, both when my religious practice is in full form and when it is not. 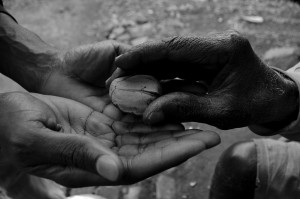 Give. When your religious practice is faltering, or straight up failing. You do not have to fall out with the gods. Your connection with them can still be honored. Consider blessing a portion of one of your daily meals and then set that portion aside for the gods. I have done this for the African/Diaspora powers with whom I work (Baron Samedi, Maman Brigitte, Eleggua, and Oya Yansa), as well as for my ancestors. You might also do the same with a beverage. Libation is one of the oldest and simplest forms of offering to the gods, ancestors, and spirits. In some traditions libation is attended with a spot of pomp and circumstance, which is awesome if you have the internal and external resources to make it happen. However, in the internal or external lean times, a portion of your dinner beverage poured out to the gods can go a long way to maintaining the connection between you. When internal and/or external resources do not permit, use what you have on hand to cultivate the bond between you and the holy powers.

When life happens and our religious practice falters, spirituality does not have to join the sad party. We can get creative and find small ways to connect with the gods, ancestors, and spirits using what internal and external resources we have! Connection is what it’s all about and we have so many more options and opportunities for connection than we realize. Experiment with what wonders you can bring to your relationships with the gods, ancestors, and spirits, no matter what’s going on in your life at the time.

January 23, 2016
Embracing The Darkness: White Fear and Grief
Next Post

February 20, 2016 Parenting is a Magical Act
Recent Comments
0 | Leave a Comment
Browse Our Archives
Related posts from Daughters of Eve