ESPN finally admits targeting conservatives was a bad idea, that is, after it lost viewers

It’s often said that the first step to recovery is admitting that you have a problem and ESPN has a BIG problem with conservatism and now the network realizes trashing the political beliefs of many of its viewers caused them to change the channel.

Folks are tired of seeing 49ers quarterback Colin Kaepernick disrespect America. They’re tired of the channel they tune in to watch sports push Black Lives Matter, or gun control instead of just basketball, baseball, and football. Sports fans witnessed ESPN fire pitching legend Curt Schilling because he spoke out against Islamic terrorism and North Carolina’s transgender bathroom bill. Viewers watched as Caitlyn Jenner was given a heroism award and University of Missouri football team was given a humanitarian award because they had the “courage” to go on strike and force the school’s “racist” president out of his job. Obama always says elections have consequences, well, so does alienating half the country. And ESPN is crawling on its hands and knees to beg for conservative viewers to come back.

“One notion that virtually everyone I spoke to at ESPN dismisses is what some have perceived as unequal treatment of conservatives who make controversial statements vs. liberals who do the same.

“ESPN is far from immune from the political fever that has afflicted so much of the country over the past year. Internally, there’s a feeling among many staffers — both liberal and conservative — that the company’s perceived move leftward has had a stifling effect on discourse inside the company and has affected its public-facing product. Consumers have sensed that same leftward movement, alienating some…. For most of its history, ESPN was viewed relatively apolitically. Its core focus was — and remains today, of course — sports. Although the nature of sports meant an occasional detour into politics and culture was inevitable, there wasn’t much chatter about an overall perceived political bias. If there was any tension internally, it didn’t manifest itself publicly.”

Long-time anchor Bob Ley has been with ESPN since the beginning and said his employer has no “diversity of thought.” There are conservative employees within the organization who say they have to “talk in whispers” because they’re too afraid it will jeopardize their jobs. The overall environment at ESPN can be summed up by what one of its print journalists, Jemele Hill, said:

“I would challenge those people who say they feel suppressed. Do you fear backlash, or do you fear right and wrong?”

You can just smell the condescension from here.

But like Ben Shapiro says, feelings and opinions aren’t facts. The Left has a hard time accepting that. They’re too busy vilifying conservatives for having a different set of ideas.

The bottom line is this: ESPN targeted conservatives, and it cost them because if there’s one thing conservatives know how to do, it’s speak with their wallets. It works every time. 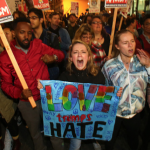 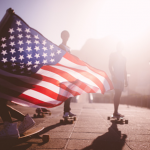 November 21, 2016 School urges students not to fly American flags on their cars, ‘out of an abundance of caution’
Recent Comments
53 Comments | Leave a Comment
Browse Our Archives
Related posts from The People's Sheriff