When a police officer has to use deadly force in a situation, the media booms it from every station.  But when that same office is exonerated in the incident, not as many people hear about it.  That’s why I wanted to tell you about Officer Timothy Corcoran:

An Englewood police officer who fatally shot a man in February was criminally cleared Friday by a Montgomery County grand jury.

Officer Timothy Corcoran, a 10-year veteran of that department and 17-year officer, shot and killed Shelly Porter III, 41 outside the former Englewood Inn. The men had talked to each other outside a different hotel earlier on Feb. 5.

“This has been a tragic event for everyone involved,” Englewood police Sgt. Mike Lang said. “We are appreciative of the diligent efforts of the Attorney General’s office and the agents of (the Bureau of Criminal Investigation). “Once we obtain (BCI’s) investigation and briefing Monday morning, we will release all investigative materials, including all body camera footage, to the public.”

Porter refused to comply with Corcoran’s commands, and the use of a TASER proved ineffective, according to a press release from the Montgomery County Prosecutor’s Office.

Let me stop you right there.  Do you know the best way NOT to get injured with an incident with the police?  Comply.  Don’t resist arrest. Obey commands. But this guy just wouldn’t obey the simple commands of the officer.

The release said “a physical fight ensued, Porter pointed his firearm at Corcoran, who then discharged his duty weapon in self-defense.”

Porter was taken to Miami Valley Hospital, where he died.

Corcoran saw Porter earlier that day in the parking lot of Hampton Inn at 180 Rockridge Road, according to police.

“The suspect was acting suspicious in that he was dressed inappropriately for the weather and was just king of hanging out in the parking lot of a hotel where he was not staying,” Lang said earlier this year.

Dispatchers later got a call from the assistant manager of the Motel 6 at 9325 North Main St.t to report a damaged a motel room. Officers found spent and unspent rounds in the motel room, but did not find a firearm.

During a search for Porter, Corcoran found him in the parking lot of the closed motel on South Main Street. After the scuffle and shooting, Porter was taken to Miami Valley Hospital, where he died.

Once the fight was on, things quickly deteriorated for police officer. There isn’t time to negotiate or consider other options. That suspect is what we call a “no person” – someone who is not complying to your lawful commands, is really looking for an opportunity to flee, resist arrest or attack the officer. I have experienced this on the street.

Officers go into a survival mindset. It is a hypervigilant state officers are trained to be in as a survival mechanism. All this crap about “less than lethal alternatives” and further dialogue might work on TV but not in real life for cops.  Instead of second guessing the officers action, I (as an experienced police shooting investigator) ask: “what could the deceased had done differently to have effected a better outcome for himself and the officer?”  Note that I do not ask “what could the officer have done differently?”

Watch the chilling video below and imagine how YOU would feel if you were in this circumstance. Notice the amount of time it took for back-up to arrive. That’s another reason why officers have to make split second decisions: help isn’t always around the corner.

Thankfully, according to Police One: “After consideration of all the testimony and evidence, the grand jury returned a no true bill,” finding that the officer’s actions “were legal under the circumstances.”

Great news – I hope it spreads as virally as the original video.  Also, here’s my three word campaign to reduce the use of force by law enforcement officers:

Those three words would’ve save that guy’s life.

May 9, 2017
Kurt Schlichter: The Left Hates You. Act Accordingly.
Next Post

May 18, 2017
Recent Comments
1 Comment | Leave a Comment
"Yes!!! Use him as a sacrifice for the buildingT.LISHUI.INFO/GG8383Ov"
iBugman Unarmed black man killed by black ..."
"Maybe we should start tagging every article like this (innocents killed by blacks) #BLM to ..."
Praying4America Blacks can’t commit hate crimes against ..."
"The premise of this statement is ignorant and anyone who believes that blacks can't commit ..."
BrooklynSWAMI Blacks can’t commit hate crimes against ..."
"Thank you for this update, Sheriff ! I think Officer Corcoran was very alert and ..."
Larry Curtis 3 Words Would’ve Saved This Guy’s ..."
Browse Our Archives
Related posts from The People's Sheriff

Politics Red
Obama ran from his biracial roots when he...
The People's Sheriff 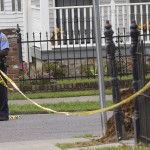