The Transforming Death of God

This is the final post in a series on the death of God. Read part one, The Foolish Death of God and part two, The Orthodox Death of God.

A few weeks ago, I began a series on the death of God, and perhaps, with all this talk of death, you are wondering where is that critical part of the Christian faith called resurrection, without which Paul says we are to be pitied.

And just as I think we re-member, relive, and re-experience the death of God, so too do we experience God resurrected.

We focus on the final two mostly as Christians, but I’m beginning to wonder whether the real mystery — the radical part, the stumbling block and the foolishness — is that Christ has died.

What kind of people, every week, proclaim the death of their God?

And indeed, these are the gifts of God for the people of God, that at the table, there is room for all, whether we see God as crucified and dead only, as alive only without the pain of death, or as always dying, and always living.

The message is always the same to everyone.  Come and eat God. Imbibe the Lord.

Even still, our Christian talk of resurrection, I’m convinced, needs to be tempered. Resurrection and rebirth is not a return to some kind of naivety in which the death of God can be forgotten or softened. So when I speak of the death of God, I do so partly as a corrective to remind us not to force those in the spiritual life to rush through the death of God, eagerly seeking out the assurance of the resurrection without grieving and attempting to wring a happy, uncomplicated ending in the midst of death.

As Christians, part of the journey of faith is experiencing the death of God. It is a grieving, painful experience. A few friends, commenting on my previous two posts on this subject, explained that while the talk made them somewhat uncomfortable, they had indeed experienced God in a similar fashion.

If you are Christian, God will die. And God will die again. It is stitched into the fabric of our faith. That death, just as it was for the disciples when Jesus died, will be painful, disorienting, traumatic.

Perhaps this is why I have been reluctant at times in my own life of faith. I find God reminding me that the death of God is coming again, that God will again leave me. And just as when Jesus foretold of his own death and his own coming absence, the disciples resisted, attempting to dissuade him.

Because ultimately, we don’t want a God who dies.

Jesus response couldn’t be more clear, however. “Get behind me, Satan,” he says to those of us who, like me, resist the death of God.

But we resist it for good reason. The death of God makes a return to “normalcy” impossible. It wounds us just as it wounds God. Death changes what God is and what God can be within the Christian story. Jesus is different, simultaneously limited and more-than in the resurrection stories. He has a real corporal body that is ephemeral, slippery and elusive, transubstantiated. A body that eats but vanishes. A body that walks the earth, but walks through walls and locked doors. It is a corporal body glimpsed in the lost, liminal traveler on the road to Emmaus, a poor fisherman on the beach cooking breakfast, a prisoner in jail, the hungry, thirsty and oppressed. It is a corporal body that is everywhere and nowhere all at once because the resurrected God is all of us.

It is the host, lifted up, pinched between fingers, parted lips, transubstantiated with saliva and gastric acid, moving through my body as I move through the world, it becoming me, me becoming it, before being released smelling of the shit of humanity, of that which we’d rather not think on.

And so when the bread is placed in palms upturned, Christ is risen, Christ has come again, but only by death.

And just as Christ rises each week, so to does he die.

There is not one death. There are many.

There is not one resurrection. There are many.

Christ has died. Thanks be to God.

Christ has risen. Thanks be to God. 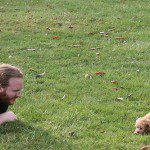 September 11, 2012
In Conversation: Jesus, Racism and the Syrophoenician Woman
Next Post 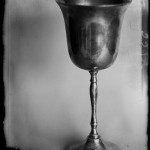