Is the Son of God film heresy or just a bad movie?: Notes from my #SonofOMG live tweet

Is the Son of God film heresy or just a bad movie?: Notes from my #SonofOMG live tweet February 28, 2014 David Roberts

It was the Greatest Story Ever Sold.

The new Jesus film, Son of God, produced by the husband-and-wife holy duo Roma Downey and Mark Burnett, isn’t really a movie as much as it’s a marketing ploy.

It’s pretty much the same thing folks saw — for free — during the History Channel’s Bible miniseries.

I decided to livetweet the movie last night under the hashtag #sonofOMG (thank you Kristen Howerton). You can read the entire stream on Storify and tune in next week to The Moonshine Jesus Show where I imagine we’ll talk some about it more.

I did all this, though, because I wanted to document my reaction. As an Episcopal priest who makes my life’s work the imperfect sharing God’s love, I take great umbrage with such blatant consumerism and exploitation of Christ.

And the Son of God has consumerism in spades. It is a movie ostensibly to win souls. But it’s really a film to fill its makers’ pockets. The marketing campaign has convinced churches to buy out theaters and flood theaters.Immediately after purchasing my own ticket to the film, I started receiving free promotional offers, including a free download of The Bible‘s first episode from the History Channel.

Jesus might be bread of life in this film, but only because those peddling his wares are rolling in dough.

But even though there a few things to commend in the film, this morning, I’m wondering whether Son of God is actually modern heresy.

Because it portrays Jesus as less than fully human.

He floats above the morass and hardships of the Palestinians, who, at the time, were oppressed and occupied by the Roman Empire. Even when angry he seems like he’s on so high a dosage of Xanax as to be sedated. This portrayal of Jesus borders on Docetism, in which Jesus’ human form is merely an illusion.

The power of the Incarnation, though, is that God comes to experience what it means to be human in all its brutality and in all its ugliness.

And if there’s one thing Jesus is not in this film, it’s ugly. 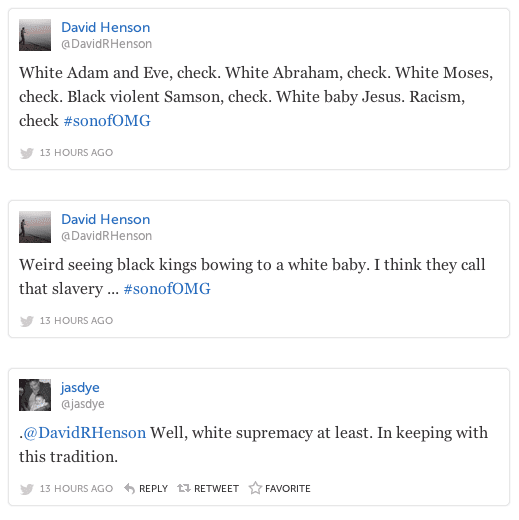 But the film’s problems don’t end with its portrayal of Jesus. Take Jesus’ mother, Mary.

After what must have been a rigorous casting search for just the right actress, the film’s producer Roma Downey was cast herself as the mother of Jesus. God works in mysterious ways, I suppose.

If that’s wasn’t bad enough, the film then proceeds to insert Downey — er, Mary —  awkwardly and annoyingly into the crucifixion scenes. It is the height of narcissism, not unlike Mel Gibson hammering the nails into Jim Caviezel’s Jesus in Passion of the Christ.

Apparently, filmmakers cannot resist the lure of making the crucifixion all about themselves.

And, then, there’s the really flawed Eucharistic theology, in which Jesus is constantly painted as leaving people at meal times. There is only one feeding of the multitudes story in which Jesus leaves the crowd for a solitary place because he feared being crowned king, but scores in which the hunger of the crowds and his compassion causes him to stick around and come out of solitude. This scene, coupled with the depiction of the Last Supper, paints Jesus as one who abandons the hungry and distraught. In other words, Jesus isn’t so much the Christ as he is a lone wolf.

In the Last Supper, there’s this powerful and touching moment when Jesus offers communion to Judas at the Last Supper, but then the filmmakers mar the beauty of the symbolism by having Judas vomit up the bread. But most problematic is when Jesus gets up and leaves the disciples at table after his betrayal. It makes Jesus the worst presider of a Eucharist ever.

Not only that, but at the first Eucharist post-resurrection, Peter sloppily pours wine and shares bread as if it is some magical conjuring spell to summon Jesus into their presence. In a moment, the Eucharist becomes a parodic version of the Bat signal shining in the sky.

But what can we expect.

The Eucharist is a ritual of sharing and of giving, of equality and of love. Son of God, on the other hand, is a film of taking and of exploiting, of money and of marketing.
Should you go see Son of God ? No. Not at all. Don’t waste your money. If you must, just watch the History channel series. Or better yet, read the books. No, not that book — the remarketing of the Bible as The Story of God and All of Us by Roma Downey.  The actual books.

You know, the Gospels. One of the greatest stories ever told. But, be warned. They aren’t for sale.