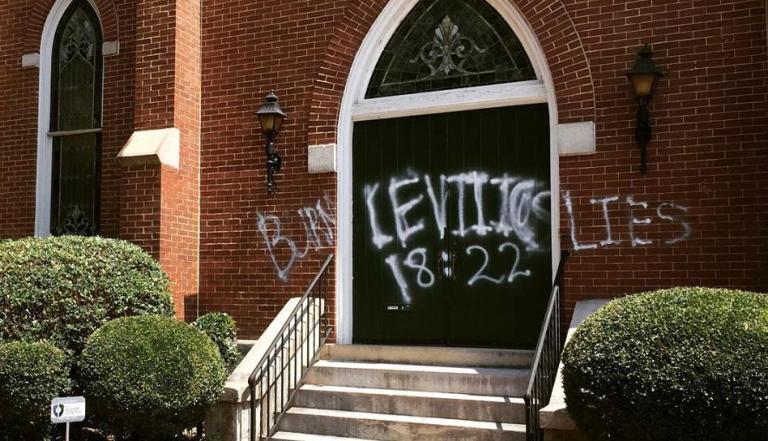 Christian persecution in the United States is real.

It’s just not what you think.

Christian persecution isn’t about having to offer birth control to women.

It’s not about having to serve wedding cakes to gay and lesbian couples.

Christian persecution isn’t even having people call you out when you spout homophobic, sexist, or racist opinions, veiled blasphemously as biblical.

Real Christian persecution is having your church burned to the ground because black people worship there.

Real Christian persecution is having your church graffitied hatefully because gay and lesbian people can worship there.

The latest victim of such persecution is the Church of Our Redeemer, a Metropolitan Community Church in Augusta, Georgia (MCCOR). It’s an open and affirming church in the midst of a deeply homophobic culture that birthed the Southern Baptist Convention. The church is a beacon for LGBTQ equality, a home and safe haven for many in the town.

But a neighbor Tuesday morning called the church’s senior pastor, the Rev. Rick Sosbe, after noticing a vandal had sought to extinguish the church’s light for equality. Someone had spray-painted “Leviticus 18:22” on doors of the church along with the words “burn” and “lie.”

As someone who until recently ministered in the Augusta area, who has walked its downtown streets in solidarity during Pride, and who has known some of this church’s ministers and members, I was both shocked and angry when news of a hate crime hit so close to home.

And just an hour away, the KKK, a self-professed Christian organization, is protesting the Confederate battle flag being removed from the South Carolina capitol in the most vile and hateful of ways.

Certainly, these two shouldn’t be simply equated with each other, but at their core, both are motivated by hate and by violence toward difference. Hate, it seems, has become a “Christian” value for some.

How in God’s name has Jesus been fashioned into a idol for bigots?

Need we be reminded —  yet again — that in the United States, it has almost always been Christians terrorizing Christians?

And those categories aren’t mutually exclusive mind you. But I put these examples together because it bears remembering that hate crimes in this country have tended to be committed overwhelmingly by Christians, frequently against Christians.

It’s terribly ironic. Christians like Franklin Graham fret and worry about attacks on the Christian faith from Muslims or other vague bogeymen who aren’t white, who aren’t Christians, or who aren’t heterosexual. But the real attack on Christianity is coming from Christians.

But as tempting as it is to focus just on this evil and hateful crime in Augusta, at the unknown criminals who attempted to darken the light of love and equality that MCCOR represents, that’s not the whole story. The MCCOR community is continuing to shine its light in Augusta . Church and community members — even a few passersby — have rallied together to repair the damage, to clean and re-paint. There has been shared joy in the joining together to literally erase the hate, according to folks there.

As always, the whole story can be so much bigger and more generous than an act of hate. And we can be a small part of that. In many ways, MCCOR is a beacon — and a fairly isolated one at that — in Augusta for ministry to and among LGBTQ people. And you can let them know they are not alone. Send their church a message or prayer of encouragement, a message of God’s love. Pour out on them the gift they have poured out in Augusta, the gift of welcome, of acceptance, and of unconditional love.

Make a donation to MCCOR here at their Go Fund Me site:  http://www.mccoor.com/giving/donate-online/ or send checks and loving messages directly to 557 Greene Street Augusta, Georgia 30901-1459. 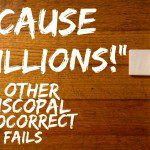