“Because Cotillions!” & Other Episcopal #AutoCorrect Fails 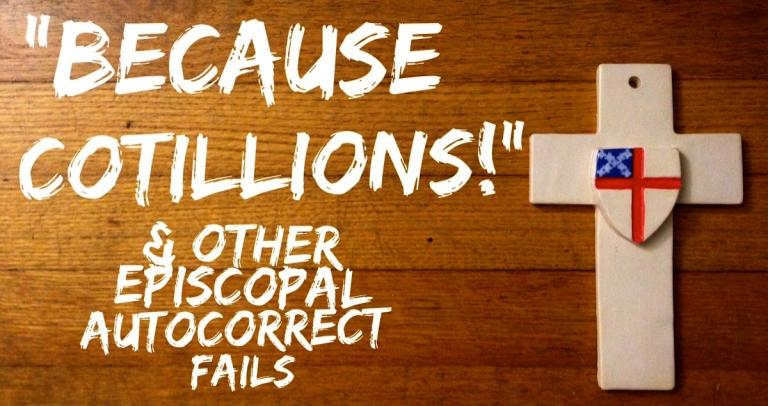 Like most folks, I do a lot of things while I’m doing a lot of other things.

As primarily a stay-at-home dad right now, it often means that I make notes while I’m doing dishes, cleaning rooms, folding clothes, or ferrying kids to and from summer activities or camps.

Typically, Apple’s speech-to-text software is pretty spot on. It gets most things right.

But frustratingly — for an Episcopal priest — it tends to get one word unfailingly  and hilariously wrong.

Episcopal, apparently, isn’t in Apple’s lexicon of oft-texted words. Neither is Episcopal Church or Episcopalian for that matter.

So in order to blunt my frustration of SCREAMING ‘EPISCOPAL’ AT THE TOP OF MY LUNGS AT MY PHONE FOR THE SEVENTEENTH TIME while composing an eight-word tweet, I decided to make a list of all the terrible ways my iPhone autocorrects variations of the word “Episcopal.”

1. “A Piscopo.” Since this is the most common autocorrect fail, Apple by now has probably collected enough data on my preferences to assume I have a very weird fetish for the 1980s Saturday Night Live cast member Joe Piscopo, who, in a touch of irony, now hosts a talk show on conservative radio. Well-played, Apple, correcting the notoriously liberal Episcopal Church into conservative talk radio worship of A Piscopo Church.

2. “Ask Italians.” Episcopalians? Nope. Ask Italians. Okay, I get it. We do after all have a history of poaching disaffected Roman Catholics, so maybe Apple’s on to something with this one. Maybe the national church can develop it into an advertising campaign. Episcopal Church? Sure! Ask Italians!

3. “Because Cotillions.” Another unintentionally accurate autocorrect of Episcopalians, this one from the truth-in-advertising department. Why Episcopal Church? Because cotillions! Honestly, it perfectly captures the feeling of walking into many Episcopal churches on a Sunday morning in the Deep South with young men in bow ties and young women in summer dresses, men in seersucker suits and women in ornate hats. Apple, perhaps you can be forgiven for thinking the Episcopal church is interchangeable with this emblem of refined country club culture.

4. “This Companions.” This is clearly Episcopalians’ version of an Indie/Hipster gathering or maybe even a traveling folk band. “You’re going to see the Episcopalians tonight?” “No, no, no. I’m going to see This Companions.” I could even see this on the side of an urban monastic spiritual space with some appropriate graphic embellishments in a gentrifying neighborhood sporting an influx of ironic mustaches, hand-crafted coffees, and vinyl record shops. In fact, were I to ever get into missional church planting, I might just use this and then wax poetically about the Paraclete.

5. “Billions.” There’s pretty much nothing about Episcopalians that come in billions. Not our budgets. Not our members. Not our churches. Maybe our chasuble options. Or General Convention resolutions. Or the times we’ve argued about sexuality or used the word “rubric” unironically and with sacred gravity.

6. “Basketball Church.” Nope. Not even close. When I say the “Episcopal Church,” to my phone, I never, ever, mean basketball. The closest things we have to sports in the Episcopal Church are thurifers with their fierce smoke swinging skills and the ever popular Acolyte Olympics. 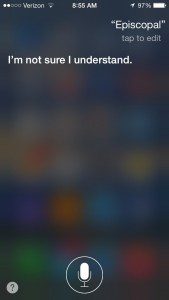 7. “Abysmal Church.” Must you taunt us with our declining membership, Apple? There’s nothing like trying to dictate a text or an e-mail to your bishop, describing the work you are doing at your “abysmal church.” So, either my phone is Albert Mohler who doesn’t even think the Episcopal is Christian anymore or its a militant atheist who hates all churches. Either way, my phone’s autocorrect pretty much owns me, and I like to think it gets some kind of AI kick out of pranking a priest who believes in God rather than our future robotic overlords.

What about you? What are some of the best — er, worst — ways your phone has corrected your Christian lingo or theology? What are your best autocorrect moments when it comes to religion and faith, texting church members or professors? Post them in the comments or tweet them using #TheologyofAutocorrect. I’ll collect and curate them using Storify.