It is finished: remarkable hand-drawn Bible goes on display

It’s quite an achievement and, as those who have seen it can attest, it is a feast for the eye.  (I gave a copy of the Psalms to my pastor as a gift for the 40th anniversary of his ordination.  It’s ravishing.)

It was a task of biblical proportions — drawing every letter and illustration in a Bible painstakingly by hand. Now, 13 years after its inception, the brightly colored and massive St. John’s Bible is complete, and pages from the finished work are about to go on display.

The Benedictine monks at St. John’s Abbey and St. John’s University in Collegeville, Minn., commissioned the Bible in 1998 to celebrate the beginning of a new millennium. The first words were written on Ash Wednesday 2000, and the seventh and final volume — “Letters and Revelation” — was completed earlier this year, with the final word — “Amen” — written on May 9, 2011.

“It has far surpassed what any of us ever imagined in our most optimum moments,” Abbot John Klassen said in an interview at the Minneapolis Institute of Arts, where the final pages of the St. John’s Bible go on display Friday.

Klassen, who leads an abbey of about 145 monks located 70 miles northwest of Minneapolis, estimates the project cost about $8 million. He said the Bible was paid for by donations through the years, and the abbey also expects to make money on full-size “Heritage Edition” facsimiles that cost about $140,000 for a complete set.

“This (the Heritage Edition) is a major investment for anyone. But it is truly, I think, of that kind of caliber,” Klassen said Thursday. “The quality of the workmanship and the quality of the artistry is phenomenal.”

Scribes working in Wales under the supervision of chief calligrapher Donald Jackson used quills cut from goose or swan feathers (Jackson was the sole writer and illuminator of Revelation). Words were written on large sheets of prepared vellum, or calfskin, and paints were hand-ground from such precious minerals or stones as gold, silver or malachite. Gold or silver leaf gild was then used to illuminate or bring pages to light.

Modern touches dominate the St. John’s Bible, believed to be the only handwritten and illuminated Bible commissioned by a Benedictine monastery in the more than 500 years since the invention of the printing press. Klassen sweeps his hand across a page from Ezekiel, which shows “The Valley of Dry Bones” at the bottom as a gray pile of skulls of victims of the Khmer Rouge, a crashed car, and victim eyeglasses from the Holocaust. But at the top of the page are shimmering rainbow colors representing God’s covenant with his people.

Bible scholar Ben Witherington, a professor and author who teaches at Asbury Theological Seminary in Wilmore, Ky., says he has never encountered anything similar to the St. John’s Bible. He says writing a Bible by hand — a tradition dating to medieval times — is “enormously difficult.”

And you can check out more of this remarkable Bible at this link.

September 19, 2011 Local boy makes good: New Hampshire gets a new bishop from Queens
Recent Comments
6 Comments | Leave a Comment
"I think I would have been happier had the CDF handled the nuns the way ..."
Theodore Seeber Vatican challenges “interpretation” of cardinal’s remarks ..."
"Blaming "Islamics" for this is like blaming the Pope for the Holocaust Denial of Hutton ..."
Theodore Seeber One killed, 44 injured in Catholic ..."
"It smacks to me of hyper-sensitivity, a veiled spiritual and intellectual pride, with regards to ..."
J D Pope Francis: “A Christian who complains, ..."
"Oh, no, we never change our mind, and we always agree, even on points of ..."
Ron Chandonia Vatican challenges “interpretation” of cardinal’s remarks ..."
Browse Our Archives
Follow Us! 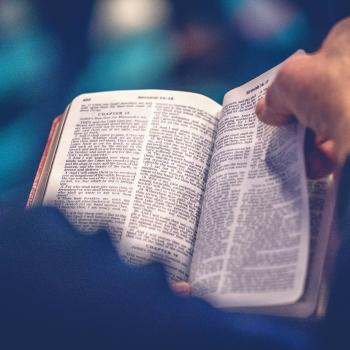 Is Coronavirus Getting Out of the Box? How...
Tick-tock, tick-tock. The pandemic clock is ticking on the Coronavirus. For several...
view all Catholic blogs
What Are Your Thoughts?leave a comment

6 responses to “It is finished: remarkable hand-drawn Bible goes on display”