[Note: my parish is celebrating a special “high” mass Saturday to mark the first Feast of Blessed John Paul II.]

By a happy coincidence, this gospel touches on a theme that was so vital to Pope John Paul.  In the parable, a tree is given one more chance to bring forth good fruit.  The gardener gives it that chance; he offers it the gift of mercy.   John Paul, you’ll remember, was beatified on the Feast of Divine Mercy.  In fact, the opening prayer for this mass begins, “Oh God, who are rich in mercy…”

Mercy was something Pope John Paul understood in a profound way.

Less than a third of John Paul’s 85 years were spent as pope.  Most of his life, in fact, was spent living and working and praying among ordinary men and women in small villages around Poland.  From that experience, I believe, he came to understand in a very personal way how deeply the human heart seeks just one more chance, how much the soul seeks the mercy of God.

So this afternoon, I wanted to speak about someone besides that man we all remember as Pope John Paul II.

I’d like us to consider Karol Wojtyla.  A lonely boy….a poet… a laborer working in a quarry…a young man in hiding.

Jesus, you’ll remember, spent most of his life in Nazareth, preparing for his great public ministry.

Well, Karol Wojtyla had his own Nazareth.  He had many Nazareths, in fact — places and experiences that touched his heart and shaped his life.

His first Nazareth was a town called Wadowice, where he was born.

His mother died when he was eight, his older brother when he was 12.   Karol was raised by his father, a tailor, in a small one-room apartment.  A friend remembered entering their apartment one day to find the father and son playing soccer with a ball made of rags.

His father died of a heart attack when Karol was only 20 – leaving him completely alone.

His next Nazareth was Krakow, where he enrolled in a university and was required to undergo military training.  He did as he was told, but with one exception: he refused to fire a weapon.  After the Nazis invaded Poland, all able-bodied men were required to work, so Karol worked in a chemical factory, and labored in a limestone quarry.  In his free time, he tried his hand at acting and writing – crafting plays and poems and short works of fiction.

But after his father’s death, only one thing mattered.  He felt drawn more and more deeply to the priesthood.  But the Nazis had closed all the seminaries.  He began studying in secret – risking imprisonment, or even death.

A year into his studies, in 1944, the Germans fled Poland.  Karol and other seminarians reclaimed the abandoned seminary.  The future pope volunteered for the most unpleasant work imaginable: he spent hours cleaning away piles of frozen waste in the bathrooms.

That winter, he was on a railway platform waiting for a train when a 14-year-old named Edith Zierer collapsed.  It turned out she was a Jewish girl who had fled a Nazi labor camp in Czetochowa.  Karol picked her up and carried her to a train and traveled with her to Krakow, so she would be safe.  Years later, she would say that Karol Wojtyla had saved her life.

After he was ordained a priest, he was sent to another Nazareth, a small village about 15 miles from Krakow.  When he arrived, the first thing he did was kneel and kiss the ground — a gesture he repeated again and again in his travels as pope.

He was a typical village priest.  He said mass, heard confessions, presided at baptisms and weddings and funerals.  He founded a small youth group that quickly became so popular, it grew from 20 people to 200.  He took students hiking, kayaking and skiing.   While he was kayaking on the lakes of northern Poland, he got word that Pope Pius XII had named him a bishop.  He was 38 years old.  Karol Wojtyla refused to cut short his trip.  He kept on paddling.

And so it began.  This is how he began the path to sainthood.  His was a life spent not only gazing toward the heavens, but also kissing the earth.  He picked up those who fell and rescued those in need and risked his life for what he knew to be true.   He saw hardship, and hate, and hope.  He shared joys and sorrows, struggles and fears.  And he saw God’s mercy at work, in sins that were forgiven and faith that was restored.

So it was that 33 years ago today, on an autumn morning in 1978, he stood before the world and said with clarity and conviction: “Do not be afraid.”  They were the first words of his first homily as pope.  They were words that he had lived.

This day, we remember where they came from.

And we remember, too, that greatness often begins in unexpected places.

Blessed John Paul had his own Nazareth.  But so do we all.  Maybe it’s an apartment in Queens.  It might be a hospital in Brooklyn, or split-level on Long Island, or a shelter in the Bronx.   But it is still Nazareth: the place where life is lived, where we are formed day-by-day, where we learn and grow and love.

These are the places where God’s plan unfolds.

He has a plan for each of us – just as He did for Karol Wojtyla.

So, on this, his first feast day, we recall that lonely boy from Wadowice, that poet in Krakow, that laborer in the mines, that priest in the kayak paddling against the current.  We pray for his intercession, and his companionship.  We ask him to be with us, to guide us, to be a reminder to us of God’s infinite mercy.

And we ask him to help us remember the words that gave light to world hidden in darkness — words that angels spoke to shepherds two thousand years ago, and that then echoed in our own age, from Rome to Gdansk to Manila to Denver to New York.

They are words of boundless hope.

This is the message of Blessed John Paul — the message he learned as Karol Wojtyla: no matter how lonely, how isolated, how persecuted, how endangered we might feel…no matter how wide the world or how great our challenges…a merciful God is with us.  He calls on us still to remember that.

October 22, 2011 "Habemus Papam"
Recent Comments
5 Comments | Leave a Comment
"I think I would have been happier had the CDF handled the nuns the way ..."
Theodore Seeber Vatican challenges “interpretation” of cardinal’s remarks ..."
"Blaming "Islamics" for this is like blaming the Pope for the Holocaust Denial of Hutton ..."
Theodore Seeber One killed, 44 injured in Catholic ..."
"It smacks to me of hyper-sensitivity, a veiled spiritual and intellectual pride, with regards to ..."
J D Pope Francis: “A Christian who complains, ..."
"Oh, no, we never change our mind, and we always agree, even on points of ..."
Ron Chandonia Vatican challenges “interpretation” of cardinal’s remarks ..."
Browse Our Archives
Related posts from The Deacon's Bench 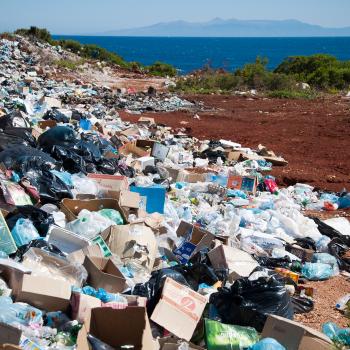