“All are indeed welcome in this place…”

“All are indeed welcome in this place…” December 17, 2011 Deacon Greg Kandra 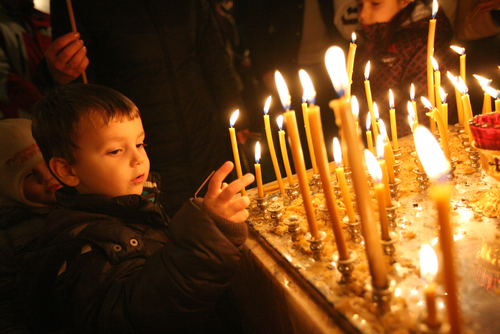 Over at his blog, Deacon Bill Ditewig shares a timely and thought-provoking dream:

The dream?  At Midnight Mass this year, that the doors will open and everyone — absolutely everyone — will walk in to applause, laughter and joy-filled welcome.  Those dirty, smelly children of God who are living under the overpass, those depressed and lonely gay teenagers who are walking on the brink of despair, those people who look and sound different from others, and even those who find themselves here without legal status — all of them will pour through those doors and into the welcoming arms of this catholic people of God and find a true home and the love that has so often been denied them by society.  “If society has rejected you, we welcome you” is the mission statement of the catholic people of God.  And to the bishop who once remarked that the song “All are Welcome” was incorrect, and that all people are NOT welcome at Catholic Mass, I say,  “Sorry, bishop, but you are wrong.  In the Catholic Church, in the authentic catholic people of God, all are indeed welcome in this place.”

I know.  Right now we have many Catholics who don’t even like to reach out and take someone else’s hand at the greeting of peace before communion.  Those folks are really not going to like my dream, since not only do I hope that they will shake someone else’s hand, but actually, beginning at Midnight Mass this Christmas, I’m hoping that they will open their arms and embrace tightly that dirty, smelly homeless man who’s been living in a cardboard box down the street from the church.  In fact, it is precisely to those who have been excluded by everyone else that Christ is coming into the world.

Read more. It’s worth it.

December 17, 2011 Bishops rebut governor's account of meeting
Recent Comments
51 Comments | Leave a Comment
"I think I would have been happier had the CDF handled the nuns the way ..."
Theodore Seeber Vatican challenges “interpretation” of cardinal’s remarks ..."
"Blaming "Islamics" for this is like blaming the Pope for the Holocaust Denial of Hutton ..."
Theodore Seeber One killed, 44 injured in Catholic ..."
"It smacks to me of hyper-sensitivity, a veiled spiritual and intellectual pride, with regards to ..."
J D Pope Francis: “A Christian who complains, ..."
"Oh, no, we never change our mind, and we always agree, even on points of ..."
Ron Chandonia Vatican challenges “interpretation” of cardinal’s remarks ..."
Browse Our Archives
get the latest from
Catholic
Sign up for our newsletter
POPULAR AT PATHEOS Catholic
1

51 responses to ““All are indeed welcome in this place…””