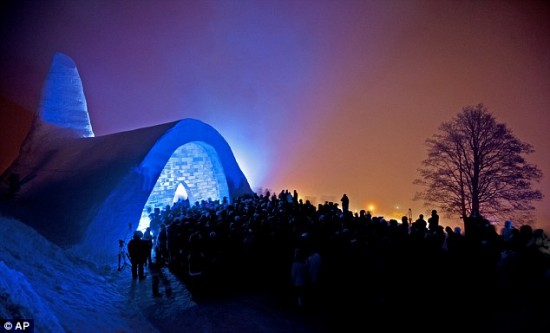 I shudder to think what baptisms would be like.

A church built entirely of ice and snow has opened in Bavaria — a century after villagers first built a snow church in an act of protest.

The church at Mitterfirmiansreut, near the Czech border, is more than 65 feet in length and boasts a tower. It’s made up of some 49,000 cubic feet of snow.

The structure was bathed in blue light as it opened Wednesday evening with a blessing from Dean Kajetan Steinbeisser.

But when the ancestors of today’s villagers built the first snow church in 1911, they weren’t thinking just of architectural achievement.

Steinbeisser says: “It was meant as an act of provocation — believers from the village got together and built a snow church because they didn’t have a church here.”

You can see more pictures of its construction here. And a video, which shows the structure being blessed, is below.

December 29, 2011
UPDATE: Judge rules New Jersey nurses do not have to assist with abortions
Next Post

December 29, 2011 Did you get a Kindle for Christmas? Try this cover for it
Recent Comments
5 Comments | Leave a Comment
Browse Our Archives
Follow Us!

Hallucination or Resurrection? Visions of the Risen Jesus
Hallucination and psychosis, used as attempts to explain away Resurrection appearances, fails....
view all Catholic blogs
What Are Your Thoughts?leave a comment