“The desecration of the greatest gift possessed by the Church, the Most Blessed Sacrament, is a very serious matter.“

Holy Spirit Catholic Church in Horizon has had one of its most sacred objects stolen — the tabernacle, which according to Catholic belief holds the body and blood of Christ.

The metal container is regarded as one of the most sacred objects in any Catholic Church and is used to house the Eucharist.

The parish priest immediately called police for help after the break-in and theft, but now a call has gone out through the whole Diocese as they ask Catholics to pray.

“It’s difficult for us to grasp who or why they could have done this,” said Father Jose Morales.

The church was broken into during the last week of October, and now Father Morales is putting out a statement to ask people for their help and prayers.

The loss and desecration came as a powerful blow to long-devoted parishioners.

“When we heard the news about it we felt bad, we couldn’t believe that it had happened here of course in the neighborhood and of course in a Catholic Church,” said Roberto Ceballos, who has been a church parishioner for 20 years.

The theft was not just a blow to their spirituality or sense of community, now their sense of safety is also being threatened.

“I don’t feel secure now… It’s just a half-block away from my house,” Ceballos said.

For Father Morales, this theft was the same as someone breaking into his home. But on top of the theft, he said it’s the violation of the most sacred part of a church itself — the physical presence of God. Now, he just wants to see the tabernacle and its sacrament back home.

The pastor posted the following message on the parish website:

Sunday night into Monday morning we had some intruders in the church that caused damages and stole items including the tabernacle with the Blessed Sacrament. The damages to the building were minor and the stolen items amount to a few thousand dollars. However, the desecration of the greatest gift possessed by the Church, the Most Blessed Sacrament, is a very serious matter.

The Horizon Police department has been very supportive since the initial response and in the investigation. I ask that if you know any information that leads to the arrest of the perpetrators to please call Horizon PD.

The indifference of the world towards God in the holiness Most Blessed Sacrament needs to be overcome with the devotion, love and the holiness of His children. Let us remain united and strong in the Lord and manifest that we are his faithful followers regardless of the violations that some express. Let us also pray that those that perpetrated these repulsive acts may repent and change their ways.

May our Blessed Mother, Our Lady of Guadalupe, who witnessed the acts of hatred and indifference towards her beloved Son, bring us consolation and guide us closer to the Sacred Heart of our Lord Jesus Christ. May the Holy Spirit protect us always. 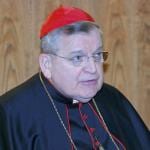 November 9, 2019
Cardinal Burke: 'It’s clear that the pope doesn’t want me in any leadership position'
Next Post 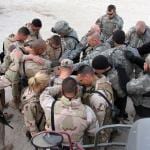 November 10, 2019 For the veterans, from Fulton Sheen
Browse Our Archives
Related posts from The Deacon's Bench