The Catholic priest with 9 children 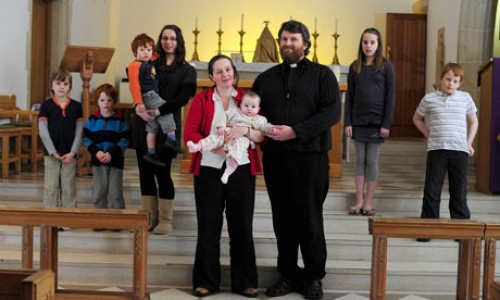 Last spring, I posted an item about an Anglican priest’s leap of faith — joining the Catholic Church and having no job prospects.  A UK paper this weekend has an update:

Father Ian Hellyer is a Roman Catholic priest – but far from being celibate, he’s a father. Not just to a couple of children, either: in true Roman Catholic fashion, Father Ian has lots of them – nine, in fact, ranging from 18-year-old Clare to seven-month-old Rose – taking in Teresa (17), Angela (15), Martha (11), John (nine), Luke (seven), Simeon (four) and Gregory (two) in between.

Ian (45) hasn’t done all this on his own, naturally: his wife Margaret (43) has been heavily involved too. And yes, he agrees genially over a cup of tea at his cluttered family home, his lifestyle does surprise a lot of people. Just the other day he was wheeling Rose’s buggy into a church before a service, clerical collar visible, when a whole row of elderly Catholic ladies turned to stare at him. “They had this mixture of delight and horror on their faces – delight at the baby, and horror that she belonged to me,” he says.

This time last year, Ian was an Anglican priest, and he and Margaret and their children lived in a large Victorian vicarage in Devon. The house, and the life, seemed to have been made for them: they had six bedrooms and two staircases. There was a huge garden and plenty of friends for the children in the surrounding villages.

It all seemed rosy, but it wasn’t: because deep inside, Ian – who was ordained into the Anglican priesthood in 1995 – was having doubts about whether he was in the right church. “I felt like a fish out of water,” he explains.

The article goes on to explain how Hellyer converted this past Easter — and the impact that had on his family:

Ian and Margaret worried about the effect on their children. “They loved the vicarage, they had friends nearby, and suddenly there was all this uncertainty,” says Margaret. “Where would we live? What would we live on? It was very unsettling for them.”…

…By last spring Ian had converted and was studying for the Catholic priesthood, travelling to London one day a week to study at Allen Hall seminary in Chelsea. But one day in May, he couldn’t make it. “I had to phone and explain that my wife had gone into labour,” he says. “I don’t think there can have been many calls like that to a Catholic seminary through the years!”

A few weeks later, with newborn Rose joining all the other Hellyers for the occasion, Ian was ordained – and told that a job had been found for him as chaplain at the University of Plymouth. What is more, the bishop gave him the happy news that a five-bedroom house beside a church in central Plymouth was being made available – and that they could move in right away.

Read it all. God bless him.

December 16, 2011
The new normal: parents making out with their kids
Next Post

December 17, 2011 Newt Gingrich, a "John Paul II Catholic"
Recent Comments
20 Comments | Leave a Comment
Browse Our Archives
get the latest from
Catholic
Sign up for our newsletter
POPULAR AT PATHEOS Catholic
1

What's Behind Trump's Sudden Support for Trafficking Victims?
Why is Donald Trump suddenly so concerned about victims of human trafficking?...
view all Catholic blogs
What Are Your Thoughts?leave a comment

20 responses to “The Catholic priest with 9 children”