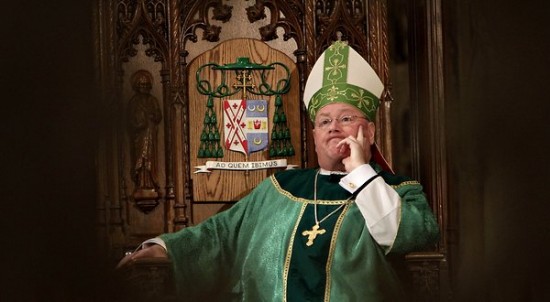 Some background and analysis, from the New York Times:

When after much internal debate the Obama administration finally announced its decision to require religiously affiliated hospitals and universities to cover birth control in their insurance plans, the nation’s Roman Catholic bishops were fully prepared for battle.

Seven months earlier, they had started laying the groundwork for a major new campaign to combat what they saw as the growing threat to religious liberty, including the legalization of same-sex marriage. But the birth control mandate, issued on Jan. 20, was their Pearl Harbor.

Hours after President Obama phoned to share his decision with Archbishop Timothy M. Dolan of New York, who is president of the United States Conference of Catholic Bishops, the bishops’ headquarters in Washington posted on its Web site a video of Archbishop Dolan, which had been recorded the day before.

“Never before,” Archbishop Dolan said, setting the tone, “has the federal government forced individuals and organizations to go out into the marketplace and buy a product that violates their conscience. This shouldn’t happen in a land where free exercise of religion ranks first in the Bill of Rights.”

The speed and passion behind the bishops’ response reflects their growing sense of siege, and their belief that the space the Catholic church once occupied in American society and the deference it was given are gradually being curtailed by an increasingly secular culture.

The conflict puts not just the White House, but also the bishops to the test. Will their flock follow their lead? And are they sufficiently powerful, now that they have joined forces with evangelicals and other religious conservatives, to outmuscle the women’s groups, public health advocates and liberal religious leaders who argue that the real issue is contraceptive coverage for all women, and that the Obama administration was right?

On the day of the decision, bishops across the country posted similarly dire statements on their Web sites, and at Mass on the following Sundays, priests read the bishops’ letters from their pulpits and wove the religious freedom theme into their homilies. By the bishops’ own count, 147 bishops in the nation’s 195 dioceses have now issued personal letters on religious freedom, which are trickling down to Catholics through their local parish bulletins and diocesan newspapers.

Some bishops called on Catholics to lobby their legislators to overturn the mandate, while a few have called for resistance. Archbishop Timothy Broglio, who oversees Catholic military chaplains, instructed them to read a pastoral letter at Mass that said, “We cannot — and will not — comply with this unjust law.” Army officials ordered him to strike that line because it could be interpreted as a call for civil disobedience.

“I have never seen the bishops mobilize so quickly,” said Stephen S. Schneck, director of the Institute for Policy Research and Catholic Studies at the Catholic University of America, in Washington. “I remember Roe v. Wade, and it took years for them to respond to that, in terms of an organized response.”

“The bishops really are convinced that this is a direct abridgement of their First Amendment religion rights,” Mr. Schneck said. “From their perspective, this really isn’t about contraception.”

February 10, 2012 End of an era: Kodak to stop making cameras
Recent Comments
0 | Leave a Comment
"I think I would have been happier had the CDF handled the nuns the way ..."
Theodore Seeber Vatican challenges “interpretation” of cardinal’s remarks ..."
"Blaming "Islamics" for this is like blaming the Pope for the Holocaust Denial of Hutton ..."
Theodore Seeber One killed, 44 injured in Catholic ..."
"It smacks to me of hyper-sensitivity, a veiled spiritual and intellectual pride, with regards to ..."
J D Pope Francis: “A Christian who complains, ..."
"Oh, no, we never change our mind, and we always agree, even on points of ..."
Ron Chandonia Vatican challenges “interpretation” of cardinal’s remarks ..."
Browse Our Archives
Related posts from The Deacon's Bench