What is a vested deacon doing carrying a rifle? — UPDATED 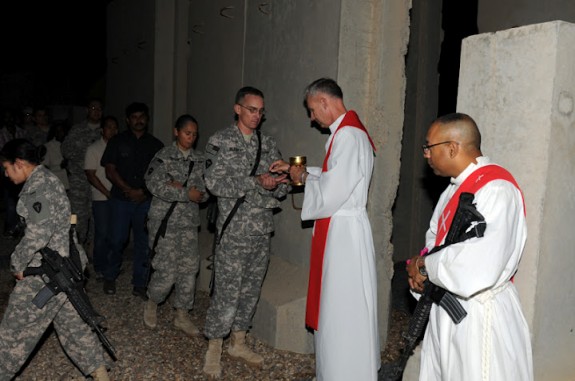 Yes, ladies and gentlemen, your eyes do not deceive you. What you see here is a vested deacon cradling a rifle.

The caption identifies Bishop Richard Spencer of the Archdiocese for Military Services, USA, distributing communion to troops who are obviously in a hostile fire zone in Iraq.  The deacon next to the bishop is unidentified, but having a deacon vested and assisting the bishop while heavily armed is completely inappropriate.  I fully understand the need to offer security and protection to the bishop while he is with these forward deployed troops.  I also understand that deacons who are on active duty come from a variety of military specialties (we are not chaplains), some of which involve combat arms.  However, when this deacon made the decision to vest as an ordained minister of the church in service to the troops, he should have left his weapon down.  If there was a particular need for his service to provide security for the bishop which required him to be armed, then he should not have vested.  Might this have made the deacon and the bishop more vulnerable to hostile action?  Perhaps, but that is a risk being taken.

This strikes me as all kinds of wrong, in so many ways.  Thoughts?

UPDATE: Speaking of vestments…the Vatican has an overview on its web site of what vestments represent, and what prayers to say while putting them on (and how many men still do that, I wonder?)

Beyond the historical circumstances, the sacred vestments had an important function in the liturgical celebrations: In the first place, the fact that they are not worn in ordinary life, and thus possess a “liturgical” character, helps one to be detached from the everyday and its concerns in the celebration of divine worship. Furthermore, the ample form of the vestments, the alb, for example, the dalmatic and the chasuble, put the individuality of the one who wears them in second place in order to emphasize his liturgical role. One might say that the “camouflaging” of the minister’s body by the vestments depersonalizes him in a way; it is that healthy depersonalization that de-centers the celebrating minister and recognizes the true protagonist of the liturgical action: Christ. The form of the vestments, therefore, says that the liturgy is celebrated “in persona Christi” and not in the priest’s own name. He who performs a liturgical function does not do so as a private person, but as a minister of the Church and an instrument in the hands of Jesus Christ. The sacred character of the vestments also has to do with their being donned according to what is prescribed in the Roman Ritual.

In the extraordinary form of the Roman Rite (the so-called Mass of Pius V), the putting on of the liturgical vestments is accompanied by prayers for each garment, prayers whose text one still finds in many sacristies. Even if these prayers are no longer obligatory (but neither are they prohibited) by the Missal of the ordinary form promulgated by Paul VI, their use is recommended since they help in the priest’s preparation and recollection before the celebration of the Eucharistic sacrifice.

UPDATE: A couple people have expressed alarm that the picture was published at all, with one reader angrily noting:

What U did is no better then the jerk who published the picture of the guys taking a leak on the dead Afghanistan’s [sic] ….we don’t need a dead deacon or bishop or soldiers.

To be clear: the picture was released by the Archdiocese for Military Services, showing events in Iraq from one year ago.   The archdiocese cleared the picture for distribution.  You can find the original source here.

UPDATE II: From a comment at Bill Ditewig’s joint:

The deacon in the picture serves as a Chaplain’s Aide for a National Guard Unit from Texas. He has been deployed twice in that capacity.

According to his deacon director, who checked on this picture, the weapon was given the deacon by a soldier who was attending Mass and the deacon was going to place the weapon in a secure location. Before he could place it there, somebody took a picture.

This discussion has been good, but the facts are important. Don’t judge without the facts.

February 8, 2012
Remember Fr. Pfleger? He's back in the news
Next Post

February 8, 2012 Imagine if Catholics were required by law to do this...
Recent Comments
0 | Leave a Comment
Browse Our Archives
get the latest from
Catholic
Sign up for our newsletter
POPULAR AT PATHEOS Catholic
1

Roe v Wade Debate Begins in Supreme Court;...
Will Roe v Wade survive the Supreme Court's consideration of Alabama's...
view all Catholic blogs
What Are Your Thoughts?leave a comment