You know things are bad when…– UPDATED 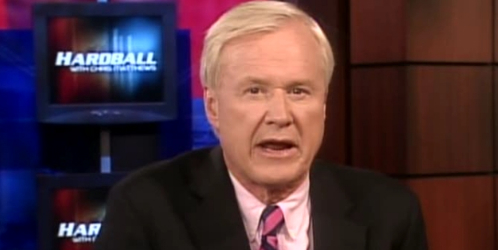 …even Chris Matthews is upset with the HHS/contraception ruling.

On Tonight’s “Hardball,” the Catholic Matthews (whose aunt, he mentioned, is a Sister of St. Joseph) was almost beside himself trying to fathom what compelled the Obama Administration to insert itself into the way people practice their faith:

I guess I grew up watching movies like Becket and A Man for All Seasons and seeing the church and state go to war with each other and being told stories from the Old Testament about the Maccabees, about people, families being told you got to eat pork. The state requires you to do it. It gets to that interesting point to me, which is frightening, when the state tells the church what to do. And then the church can no longer teach. If the church teaches it’s morally wrong to use birth control, how can you make the teacher pay for birth control without losing their authority, their moral authority? That’s what the church is afraid of. If they start financing, under the law, what they are called to do, do they have any more credibility on the issue of birth control or anything else? That’s what I think is the concern here. It’s a political issue. I agree. If you can make them do it, they can’t teach it anymore.

Meantime, is the White House getting cold feet?

A key White House adviser on faith issues said Tuesday that several organizations with ties to the administration have approached President Obama’s aides about finding a resolution to fast-growing controversy over a new rule requiring many Catholic institutions to offer birth control and other contraception services as part of employees’ health care coverage.

“There are conversations right now to arrange a meeting to talk with folks about how this policy can be nuanced,” said Pastor Joel C. Hunter, a Florida megachurch pastor who has grown personally close to Obama and advised his White House on religious issues. “This is so fixable, and we just want to get into the conversation.”…

Stay tuned.  This story does seem to be getting traction.  I noticed that CBS News ran the contraception controversy as the second item on tonight’s Evening News, and included an interview with CUA President John Garvey.  An otherwise decent report was flubbed, however, by Wyatt Andrews intoning in his standup that -quote – “98% of Catholic women use contraception.”

Also: The Anchoress has this tidbit from this morning:

David Axelrod, who serves as a top adviser to Mr. Obama’s re-election campaign, said on MSNBC’s “Morning Joe” program that the president would “look for a way” to address the vocal opposition from Catholic groups who say the rule forces them to violate their religious beliefs against contraception.

“We certainly don’t want to abridge anyone’s religious freedoms, so we’re going to look for a way to move forward that both provides women with the preventative care that they need and respects the prerogatives of religious institutions,” Mr. Axelrod said.

UPDATE: Bloomberg has some interesting back and forth on this, and how the decision on the HHS mandate was reached:

Health and Human Services Secretary Kathleen Sebelius, a Catholic and a two-term governor of Kansas, was joined by several female Obama advisers in urging against a broad exemption for religious organizations. To do so would leave too many women without coverage and sap the enthusiasm for Obama among women’s rights advocates, they said, according to the people, who spoke about the deliberations on condition of anonymity.

Vice President Joe Biden and then-White House chief of staff Bill Daley, also Catholics, warned that the mandate would be seen as a government intrusion on religious institutions. Even moderate Catholic voters in battleground states might be alienated, they warned, according to the people familiar with the discussions.

The administration’s decision, announced Jan. 20, has quickly entered the presidential campaign. Republican rivals accuse Obama of trampling on religious freedom and Catholic bishops have ordered lectures from the pulpits across the nation.

The White House has been skittish from the start about the new rule, which was announced last month only after internal debates at the White House that, to some extent, pitted women — Health and Human Services Secretary Kathleen Sebelius, who is Catholic; Valerie Jarrett, a senior adviser to the president, and Nancy-Ann DeParle, the deputy chief of staff, on one side, arguing forcefully in favor of the rule, administration officials said.

On the other side, cautioning that the administration tread carefully and look for ways to minimize another major break with the church, they said, were several Catholic men who are close advisers to Mr. Obama: Vice President Joseph R. Biden Jr. and William M. Daley, the chief of staff at the time. Also weighing in, administration officials said, was Denis R. McDonough, the deputy national security adviser, whose purview does not naturally extend to health issues, but who is a Catholic.

“I can’t tell you how many times we went over this,” one administration official said, speaking on grounds of anonymity. In the end, it was Mr. Obama himself who made the decision, aides say, calculating that at the end of the day, the issue of public health access outweighed the concerns of the religious institutions.

Administration officials say one avenue for resolution might be to look at how Catholic institutions in the 28 states with similar laws have dealt with the issue. One possible compromise might be to emulate Hawaii, where the rule is in effect, but where employees at religious institutions that do not offer free contraception can get birth control through side benefits, which the employees nominally pay for but which often end up being free.

February 8, 2012 Tweet of the day
Recent Comments
0 | Leave a Comment
"I think I would have been happier had the CDF handled the nuns the way ..."
Theodore Seeber Vatican challenges “interpretation” of cardinal’s remarks ..."
"Blaming "Islamics" for this is like blaming the Pope for the Holocaust Denial of Hutton ..."
Theodore Seeber One killed, 44 injured in Catholic ..."
"It smacks to me of hyper-sensitivity, a veiled spiritual and intellectual pride, with regards to ..."
J D Pope Francis: “A Christian who complains, ..."
"Oh, no, we never change our mind, and we always agree, even on points of ..."
Ron Chandonia Vatican challenges “interpretation” of cardinal’s remarks ..."
Browse Our Archives
Related posts from The Deacon's Bench