For the life of me, I can’t remember ever attending a church that had a bowling alley, but evidently it was a big deal for a while in some parts of the country.

But that’s changing.  This, from USA TODAY: 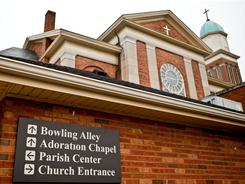 When Max Carson watched his bride Nancy walk down the aisle at St. Ann Catholic Church at their 1974 wedding, organ music was accompanied by the unmistakable sound of balls crashing into bowling pins.

“I said ‘I do’ and bowling balls were flying,” says Carson, 62, who didn’t know then that the St. Boniface Bowling Alley, built in 1945, was in the church basement. Now he plays in the Has-Beens League every Wednesday morning in the four-lane alley.

“I always joke that if I preach too long, people go downstairs and start bowling,” Pastor Terry Cassidy says.

St. Ann’s little bowling alley is almost as popular now as it was after parishioners created the hideaway, which has a bar and dining room. It was rebuilt after a fire in the 1960s. Two leagues, one for men and another for women, play on Wednesdays, and parties are booked for almost every Friday and Saturday night, manager Jim Seppelt says.

Church bowling alleys are disappearing fast. There are probably fewer than 200 left , says Neil Stremmel, of the U.S. Bowling Congress.

Doug Schmidt, author of the 2007 book They Came to Bowl: How Milwaukee Became America’s Tenpin Capital, says that city once had at least 13 church bowling alleys. “They came with German immigrants in the 1860s,” Schmidt says. “Most closed in the 1980s or ’90s.”

March 9, 2012
Burying the last Belgian missionary in Hawaii
Next Post

March 10, 2012 Here we grow again: more Catholics, priests, deacons, seminarians worldwide
Recent Comments
0 | Leave a Comment
"I think I would have been happier had the CDF handled the nuns the way ..."
Theodore Seeber Vatican challenges “interpretation” of cardinal’s remarks ..."
"Blaming "Islamics" for this is like blaming the Pope for the Holocaust Denial of Hutton ..."
Theodore Seeber One killed, 44 injured in Catholic ..."
"It smacks to me of hyper-sensitivity, a veiled spiritual and intellectual pride, with regards to ..."
J D Pope Francis: “A Christian who complains, ..."
"Oh, no, we never change our mind, and we always agree, even on points of ..."
Ron Chandonia Vatican challenges “interpretation” of cardinal’s remarks ..."
Browse Our Archives
get the latest from
Catholic
Sign up for our newsletter
POPULAR AT PATHEOS Catholic
1

Put Down the Rocks!
I'm thinking, we need a do-over of the Year of Mercy.  Because...
view all Catholic blogs
What Are Your Thoughts?leave a comment