The “twilight of Christianity” in Iraq 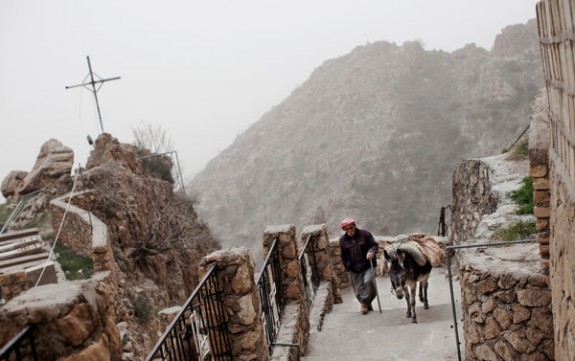 Sad and sobering news, from the New York Times:

Iraq’s dwindling Christians, driven from their homes by attacks and intimidation, are beginning to abandon the havens they had found in the country’s north, discouraged by unemployment and a creeping fear that the violence they had fled was catching up to them.

Their quiet exodus to Turkey, Jordan, Europe and the United States is the latest chapter of a seemingly inexorable decline that many religious leaders say tolls the twilight of Christianity in a land where city skylines have long been marked by both minarets and church steeples. Recent assessments say that Iraq’s Christian population has now fallen by more than half since the 2003 American invasion, and with the military’s departure, some Christians say they lost a protector of last resort.

Their flight is felt in places like the wind-scoured village of Tenna, which has sheltered dozens of Christian migrants over the past nine years. The families fleeing Baghdad’s death squads and bombings found safety here beneath the hulking mountains, but little else besides poverty, boredom and cold. Villagers estimate that half of the 50 or so Christian homes are now empty, their families abroad.

Walid Shamoon, 42, wants to be the next to leave. He said he left Iraq’s capital in January 2011 after a confrontation with Shiite militia members set off a nightmare of escalating death threats and an attempt on his life. A brother had already been killed in a mortar attack six years earlier, so he said he quit his contract job with the Australian Embassy, giving up a $1,500 monthly salary, and came here.

These days, all he can think about is his application to emigrate to Arizona.

“This is not a life,” he said one recent afternoon, as a blizzard raced down from the mountains. “There is no improvement. There is no work.”

Many of the people now struggling in Iraq’s Kurdish north came in the wake of a suicide attack in Baghdad at Our Lady of Salvation Church in October 2010. It was the single worst assault on Iraq’s Christians since the war began, one that left 50 worshipers and 2 priests dead and that turned the church into a charnel house of scorched pews and shattered stained glass.

Christian families in Baghdad grabbed clothing, cash and a few other provisions and headed north for the Christian communities along the Nineveh plain and Kurdistan’s three provinces. They joined tens of thousands of other Christians from the capital, Mosul and other cities who traced similar arcs after earlier attacks and assassination campaigns.

“They traded everything for security,” said the Rev. Gabriel Tooma, who leads the Monastery of the Virgin Mary in the Christian town of Qosh, which took in dozens of families.

The Christians in northern Iraq make up a tiny fraction of Iraq’s legions of displaced people. In all, there are 1.3 million of them across the country, according to the most recent United Nations estimates. Many live in garbage dumps, shanty towns and squalor far worse than anything facing the Christian families in Kurdistan.

And for more on the plight of Iraq’s Christians, check out “A New Genesis in Nineveh,” from a recent issue of ONE magazine.

March 11, 2012 "To be cool with God": a young Catholic's thoughts on confession
Recent Comments
0 | Leave a Comment
"I think I would have been happier had the CDF handled the nuns the way ..."
Theodore Seeber Vatican challenges “interpretation” of cardinal’s remarks ..."
"Blaming "Islamics" for this is like blaming the Pope for the Holocaust Denial of Hutton ..."
Theodore Seeber One killed, 44 injured in Catholic ..."
"It smacks to me of hyper-sensitivity, a veiled spiritual and intellectual pride, with regards to ..."
J D Pope Francis: “A Christian who complains, ..."
"Oh, no, we never change our mind, and we always agree, even on points of ..."
Ron Chandonia Vatican challenges “interpretation” of cardinal’s remarks ..."
Browse Our Archives
Related posts from The Deacon's Bench

Peter and Paul Found Their Greatness In Their...
We tend to consider all the great things Peter and Paul did,...
view all Catholic blogs
What Are Your Thoughts?leave a comment