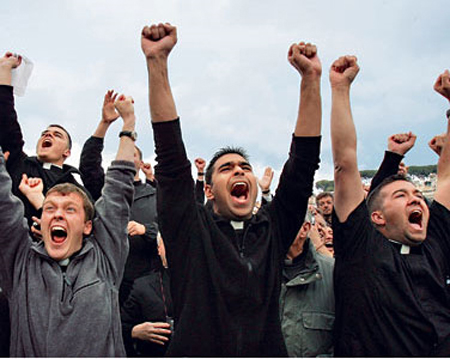 My parish is hosting its annual vocations fair this weekend, to coincide with the 49th annual World Day of Prayer for Vocations, so my homily focuses on that.

For audio of this homily as it was delivered, click the green arrow below.

“We are all God’s children…what we shall be has not yet been revealed.”

Those words from the letter of St. John that we heard a few moments ago could speak beautifully to a subject we’re focusing on here at the parish this weekend: vocations.

What will God reveal to us about what He wants us to be?

I was attending Sunday Mass while on retreat at a Trappist monastery in Georgia and, for the first time in my life, I saw and heard a permanent deacon preach. His name was Wayne Bodkin, from Great Britain. I remember that he preached in three languages – English, French and Spanish – and that the gospel was about Jesus being the “way, the truth and the life.” I couldn’t explain it at the time. But something just clicked.

And from out of nowhere, I was struck by a shocking, improbable thought.

It was just that simple. That is how my vocation was born. The seed was planted. And, for better or for worse, here I am.

It’s impossible to say where exactly vocations come from, or how the Holy Spirit does His work. Who can say what divine chemistry causes a spark to catch flame?

But I can say this much, which may surprise you: if you think you don’t have a vocation, you are wrong.

The fact is that everyone in this church today has a vocation. Every one of us is called.

How we choose to answer that call – or choose not to – defines us not only for this life, but also for the next. For a lot of us, it may be marriage and raising a family. It may be living in the world as single man or woman. But for some of us, it may even involve a religious vocation – and it just might sneak up on you and alter your life in amazing ways.

I am here today to tell you that if you think you couldn’t possibly have a religious vocation, if you think that is utterly beyond the realm of possibility and its downright laughable…think again.

I used to think the same thing. So did a lot of people who have found themselves drawn into an unplanned love affair — a love affair with God that upended their world.

This is a phrase I heard a lot when I was in formation, and it’s worth remembering:

“God doesn’t call the perfect; He perfects the called.”

I like to tell the story of a man from Douglaston. He was born Protestant, and spent much of his life riding back and forth on the Long Island Rail Road – in a sense, waiting for God to reveal to him what he would be. For a while in college, this young man was a communist. While studying overseas, he fathered a child out of wedlock. But he later underwent a profound conversion. At the age of 23, he was baptized a Catholic. Three years later, he entered a monastery in Kentucky, where he went on to become one of the most influential and brilliant spiritual writers of the last century.

His name, of course, is Thomas Merton.

She also grew up in Queens – in this very parish, in fact. Her name is Mary Ann Marks or, as she is known today, Sister Mary Veritas.

To paraphrase an old saying: sometimes a vocation is what happens to you when you are making other plans.

If you think you already have a career and your life is set…well, so did most of the men who were ordained to the priesthood in the United States last year.

Fr. Quan Tran of San Francisco was a lawyer for 12 years. Fr. Jonathan Kelly of St. Paul was an investment banker on Wall Street. Fr. Philip Petta of Fort Worth was baptized a Catholic when he was 48 and entered the seminary two years later. Father Christopher Klusman of Milwaukee may have answered the most unusual call – one that came to him in total silence. He is a priest who was born deaf.

Finally – and more immediately — there’s the young man who was a cartoonist and animator from Paramount Studios before he heard the call and joined the seminary over 50 years ago. He’s sitting up here at the altar this morning: Msgr. Joseph Funaro.

“We are all God’s children…what we shall be has not yet been revealed.”

What we shall be — what God reveals to us – so often makes up the great adventure of our lives. And it is within each of us, if we simply take the time to look, to listen, to pray – and to dream.

Many years after he’d left Queens, and taken his last trip on the Long Island Rail Road, and embarked on the great adventure of his life, Thomas Merton wrote words about vocation that I want to leave you with this morning. 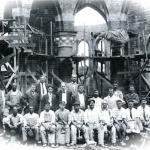 April 28, 2012 Building God’s kingdom: a homily for the 4th Sunday of Easter
Recent Comments
0 | Leave a Comment
"I think I would have been happier had the CDF handled the nuns the way ..."
Theodore Seeber Vatican challenges “interpretation” of cardinal’s remarks ..."
"Blaming "Islamics" for this is like blaming the Pope for the Holocaust Denial of Hutton ..."
Theodore Seeber One killed, 44 injured in Catholic ..."
"It smacks to me of hyper-sensitivity, a veiled spiritual and intellectual pride, with regards to ..."
J D Pope Francis: “A Christian who complains, ..."
"Oh, no, we never change our mind, and we always agree, even on points of ..."
Ron Chandonia Vatican challenges “interpretation” of cardinal’s remarks ..."
Browse Our Archives
Follow Us!