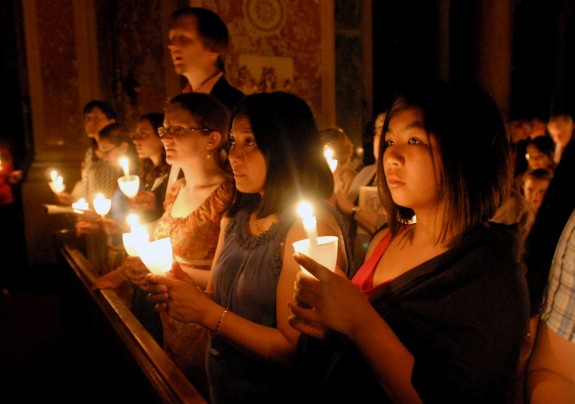 Last year, I had the good fortune to interview a spirited nun from Armenia named Sister Arousiag.  She is a Sister of the Immaculate Conception, and the mother superior of a convent in one of Armenia’s largest cities.  There is almost nothing she doesn’t do.  She’s a fierce, determined little woman who operates an orphanage, as well as a day care center for the elderly, and a summer camp program that serves over 800 orphaned children every year.

This is a woman living out the gospel in one of the most desperate, economically challenged corners of the world – a place ravaged by war, earthquakes and economic crises.

There is widespread unemployment in Armenia right now, and many people are leaving.  Those left behind are often left destitute.   But she doesn’t see the poor or the desperate as problems to be solved – she sees, instead, challenges to be met, and lives to be changed.  She serves people of all religions, all backgrounds, all beliefs.

And she does it for one reason:

She sees every day as a chance to share God’s love.

As we concluded our interview, I commented on her unusual name, Arousiag, and asked her what it meant.

That, of course, fits her perfectly.  She is a bearer of hope, of dignity, of love.  She really is a carrier of light.

And this evening, we are reminded: so are we.

The candles we carried at the beginning of this liturgy spread person to person, flame to flame.   This sacred candle, representing the very light of Christ, became a part of every one of us.   And so we became, each of us, a “carrier of light.”

That means we share in the beauty, the wonder, and the illumination of this wondrous night.  We share in the joyous news that Christ is risen.  And it means that we need to share that good news, that light, with others.

According to the USCCB, last year, in the United States, there were over 830-thousand infant baptisms.  43-thousand adult baptisms.  Nearly 73-thousand people received into full communion with the church.

The light just keeps spreading. And we’re adding to it tonight, here and now, with those joining our church, the candidates and catechumens.

Every year I stand here and watch this miracle unfold, and every year I am moved and inspired by the love and commitment of those who have chosen to become a part of our faith.   And it connects beautifully to a message in tonight’s gospel.

You’ll remember that the young man in the tomb said to the women, “Do not be amazed!”

But yet he told them: This shouldn’t surprise you.  Jesus has been raised.  He is not here.  He will meet them in Galilee.

As the sun began to dawn in Jerusalem on that morning 2,000 years ago, a timeless truth dawned, as well.  Jesus is not to be found among the dead.  He is among the living.

You will find him in Armenia, in the work of Sr. Arousiag, that “carrier of light.”

You will find him here, among our catechumens and candidates, and all who fervently want to spread that light.

Do not be amazed that God keeps his promises.  Instead, be amazed at His great, enduring love – a love that prevails through history, in spite of our sinfulness and our brokenness.

Be amazed at God’s astounding mercy and generous concern for humanity – as the Exsultet says, “To ransom a slave, you gave away your son.”

Be amazed that we are blessed to carry on what God’s son began – and have done it for over 20 centuries.  It only happens by God’s grace.

Be amazed that we are blessed to be here tonight, gathered under this roof, joined together as one family of faith, holding candles in our hands and singing alleluias on our lips.

When you leave this sacred space tonight, take your candle home with you.  Remember what it represents.  Remember who we are.

And remember this: in a world that seems so often overwhelmed by the dark…miraculously, joyously, amazingly, we are called to be– blessed to be–carriers of light.

April 7, 2012
What happened to Satan's empty promises?
Next Post

April 8, 2012 The newest addition to my wardrobe
Browse Our Archives
get the latest from
Catholic
Sign up for our newsletter
POPULAR AT PATHEOS Catholic
1